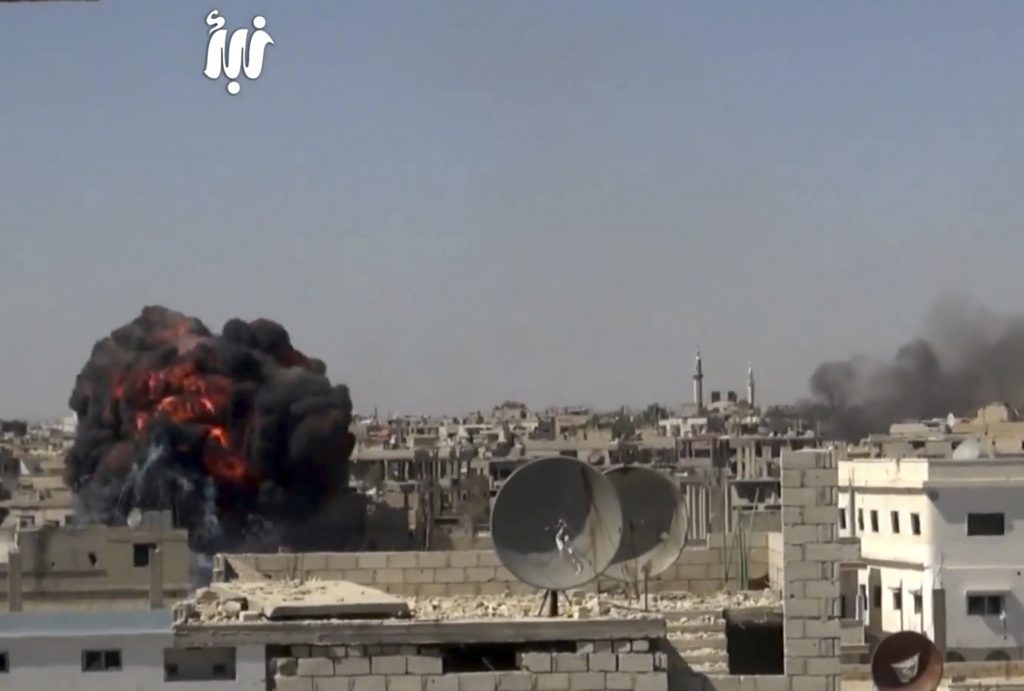 U.S. troops based in Syria’s southeastern desert have expanded their footprint, rebels there say, increasing the risk of direct ground confrontation between the Americans and Iran-backed pro-government forces.

U.S. special forces have been based since last year at Tanf, a strategic Syrian highway border crossing with Iraq, where the Americans have assisted rebels trying to recapture territory from fleeing Islamic State terrorists.

The U.S.-backed Syrian rebels in the area are in competition with pro-government forces who are also trying to recapture territory from Islamic State.

On several occasions in recent weeks, warplanes of the U.S.-led coalition have struck pro-government forces to prevent them advancing, in what Washington has described as self defense.

Abu al-Atheer, military spokesman for the U.S.-backed Maghawir al-Thawra rebel group, told Reuters U.S. forces had spread from their initial location at Tanf to set up a second base at Zakf, around 40-50 miles to the northeast.

Colonel Ryan Dillon, spokesman for the U.S.-led coalition fighting against Islamic State in both Iraq and Syria, denied troops had set up a new base. But he said sometimes coalition forces conduct patrols and training with rebels at locations outside Tanf that could be maintained for days or weeks.

“We have that garrison in al-Tanf that is a temporary base and location for us to train our partner forces to fight to defeat ISIS, but that is the only base in southern Syria or location where we have coalition forces,” Dillon said.

“The (new) base was being studied for months but now it’s an official base. It has been built and expanded and G-d willing will be in the next few days like the Tanf base,” he told Reuters.

Video clips purportedly of the Zakf site, sent to Reuters by another rebel in the group, showed a convoy of military vehicles travelling on a paved road lined by long walls, a communications mast and a hut. Another showed three men in uniform next to two small military vehicles, firing a mortar in otherwise empty desert.

U.S.-backed rebels are fighting to oust Islamic State terrorists from their last two major bastions – Mosul in Iraq and the Euphrates River valley near Raqqa in Syria – in battles which Washington hopes could crush the group this year.

The Syrian government, backed by Russia and Iran, also wants to reclaim the territory in Syria. Pro-government forces have taken up positions north of Tanf, potentially cutting off the U.S.-backed rebels from advancing.

Muzahem Saloum, a rebel official close to Maghawir al-Thawra, said the Zakf location would back up Tanf and was expected to be a “first line of defense” against any attack by Iranian-backed Syrian pro-government militias.

Tanf is located near a Syria-Iraq border crossing on the main Baghdad-Damascus highway, and the U.S.-backed rebels took it from Islamic State last year, partly to stop Iran from using it in future to send arms to the Syrian government.

The U.S.-backed rebels also want to use it to take more territory along the border and to push towards Deir al-Zor, a large city on the Euphrates where the government has an enclave surrounded by Islamic State terrorists.

However, Syria’s army has declared winning back control of the desert and relieving its besieged Deir al-Zor enclave a military priority and has advanced swiftly from Palmyra with troops and dozens of tanks.

Aided by allied militias backed by Iran, it also hopes to join up with Iraqi forces advancing against Islamic State across the border to secure a land route from Damascus to Baghdad.

Recent Syrian government advances to the Iraq border northeast of Tanf and Zakf mean the U.S.-backed rebels would have to fight the Syrian army in order to march on Deir al-Zor.

U.S. Defense Secretary Jim Mattis on Tuesday said air strikes against pro-government forces near Tanf in recent weeks had been in self defense, to prevent them from attacking its troops at the base.

“The battle is not over and we will not allow the Iranian Shiites to occupy our land. Our response to those who stand against us will be cruel,” he added.