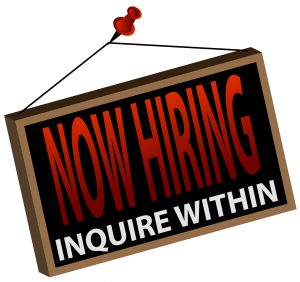 U.S. employers in April advertised the most open jobs in 16 years, yet hiring fell and fewer people quit work. The figures suggest that businesses are struggling to find qualified employees as the unemployment rate declines.

Job openings rose 4.5 percent in April to more than 6 million, the Labor Department said Tuesday, the most since December 2000, when the government first began tracking the data. Meanwhile, hiring fell 4.8 percent to just over 5 million.

The report is a sign that the economy is nearing or already at “full employment,” when most of those who want a job have one and the unemployment rate mostly reflects the churn of people who are temporarily out of work. Typically, when unemployment falls that low, companies are forced to offer more pay, but that hasn’t yet happened.

On Friday, the government reported that average hourly pay rose just 2.5 percent in May from a year earlier. That’s improved a bit from several years ago, but is still below the pre-recession pace of about 4 percent.

Most economists interpreted last month’s decline in net job gains as a sign of full employment, which is mostly a good thing, as opposed to evidence of a slowing economy.

Yet that still leaves one question unanswered: Why aren’t companies paying more, if they are so intent on hiring?

Some economists argue that slower pay raises suggest they may not be so desperate after all. It’s easy to post jobs on a website, but employers may not follow through by recruiting more and offering higher pay.

One trend supporting that view is a decline in the number of people quitting, which slipped 3.5 percent to 3.1 million in April. People typically quit when they either find a new job, usually at higher pay, or are confident they can soon find one.

For that number to fall at the same time employers are posting a record number of job openings suggests that not many people are being lured away from their current jobs by other companies dangling attractive pay.

In other cases, companies in specific industries may be offering bigger paychecks, but those raises are being offset by other trends. With the workforce aging, higher-paid employees are retiring and being replaced by younger, lower-paid workers, which could depress overall wage growth.

Job openings posted by hotels and restaurants surged 18 percent in April from the previous month, even as hiring in that sector fell. Many restaurant chains have offered more pay in recent years, and workers have also benefited from higher minimum wages.

But companies in those industries also face stiffer competition for workers when the unemployment rate falls, because people are more likely to gravitate toward higher-paying work when the economy improves.

Construction job openings jumped by about 25 percent, the latest evidence that firms in that sector are desperate for labor. The number of homes for sale has fallen sharply in the past two years, but many homebuilders say they can’t find enough workers to accelerate building.