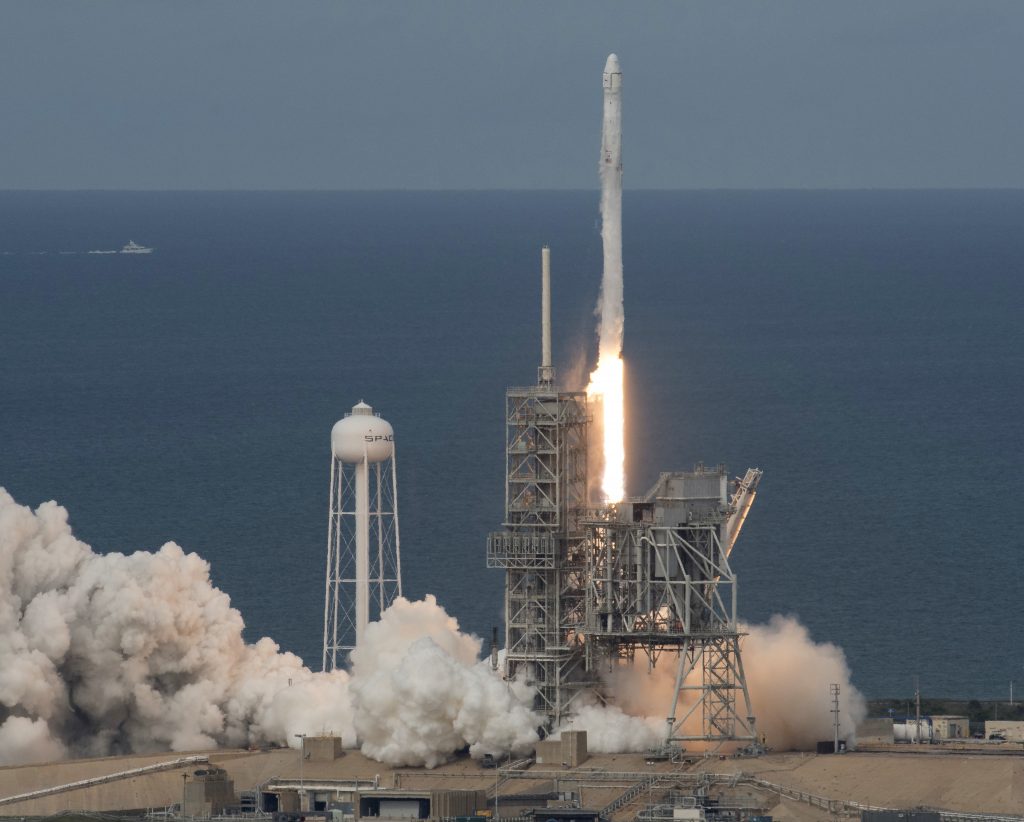 SpaceX launched its first recycled cargo ship to the International Space Station on Saturday, yet another milestone in its bid to drive down flight costs.

After a two-day delay caused by thunderstorms, the unmanned Falcon rocket blasted off carrying a Dragon capsule that made a station delivery nearly three years ago. When this refurbished Dragon reaches the orbiting lab on Monday, it will be the first returning craft since NASA’s now-retired shuttles.

The first-stage booster flown Saturday afternoon was brand new, and as is now the custom, returned to Cape Canaveral following liftoff for a successful vertical touchdown. “The Falcon has landed,” SpaceX Mission Control declared from company headquarters in Hawthorne, California, and a cheer went up.

The plan is to launch the booster again, instead of junking it in the ocean as so many other rocket makers do. Just two months ago, SpaceX launched its first recycled booster on a satellite mission. Another flight featuring a reused booster is coming up later this month.

This Dragon capsule, meanwhile, came back for take two following a few modifications and much testing. Shortly before liftoff, a SpaceX vice president, Hans Koenigsmann, called the Dragon reflight “a pretty big deal.”

It’s all part of the company’s quest, he said, to lower the cost of access to space through reusability.

SpaceX chief Elon Musk tweeted early Sunday morning: “It’s starting to feel kinda normal to reuse rockets. Good. That’s how it is for cars & airplanes and how it should be for rockets.”

The Dragon soaring Saturday has the same hull and most of the same parts from its 2014 flight. SpaceX installed a new heat shield and parachutes, among a few other things, for the trip back to Earth at flight’s end. The Dragon is the only supply ship capable of surviving re-entry; all the others burn up in the atmosphere. NASA’s other supplier, Orbital ATK, will see its cargo carrier depart the 250-mile-high complex on Sunday, six weeks after arriving.

Besides the usual supplies, SpaceX’s latest 6,000-pound shipment includes mice and flies for research, a new kind of roll-up solar panel and a neutron star detector.

For now, SpaceX said savings are minimal because of all the inspections and tests performed on the already flown parts. NASA’s space station program manager, Kirk Shireman, told reporters earlier in the week that SpaceX did a thorough job recertifying the Dragon and that the risk is not substantially more than if this were a capsule straight off the factory floor. He said the entire industry is interested in “this whole notion of reuse,” first realized with the space shuttles.

It was the 100th launch from NASA’s hallowed Launch Complex 39A at Kennedy Space Center, the departure point for the Apollo moon shots as well as dozens of shuttle missions, including the last one in 2011. SpaceX now leases the pad from NASA; the company’s first launch from there was in February.

SpaceX has been hauling station supplies for NASA for five years, both up and down. This is the company’s 11th mission under a NASA contract. The company’s next step is to deliver astronauts using modified Dragons. That could occur as early as next year.

Until SpaceX and Boeing start transporting crews, astronauts will continue to ride Russian rockets. On Friday, a Russian and Frenchman returned from the space station in their Soyuz capsule, leaving two Americans and a Russian behind. The station was zooming over Oman in the Persian Gulf when the Falcon took flight.