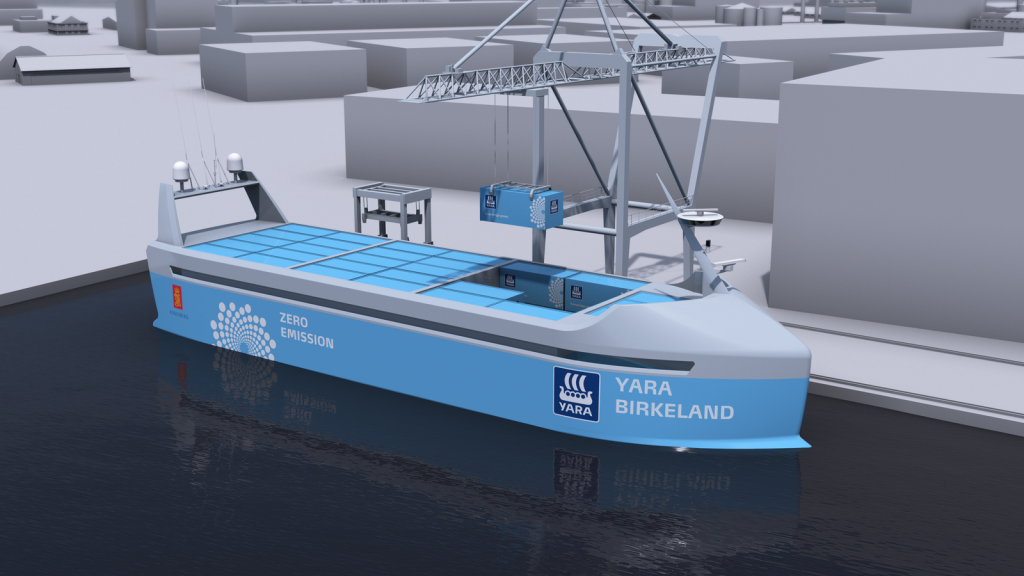 It sounds like a ghost story: a huge cargo vessel sails up and down the Norwegian coast, silently going about its business, without a captain or crew in sight. But if all goes as planned, it’s actually the future of shipping.

On May 9, Kongsberg Gruppen, a Norwegian maritime-technology firm, and fertilizer manufacturer Yara announced a partnership to build the world’s first fully autonomous cargo container ship. Manned voyages will start in 2018, and in 2020 the Yara Birkeland will set sail all on its own. It’s the beginning of a revolution that should transform one of the world’s oldest and most conservative industries — and make global shipping safer, faster and cleaner than it’s ever been.

The commercial rationale for autonomous ships has long been clear. The U.S. Coast Guard has estimated that human error accounts for up to 96 percent of all marine casualties. A recent surge in piracy is a grim reminder that crews remain vulnerable (and valuable) targets for international criminals. Perhaps unsurprisingly, the industry is facing a chronic shortage of skilled workers who want a career at sea.

By one consultant’s estimate, carrying sailors accounts for 44 percent of a ship’s costs. That’s not just salaries: crew quarters, air-conditioning units, a bridge (which typically requires heavy ballast to ensure a ship’s balance) and other amenities take up valuable weight and space that might otherwise be used for cargo. And that dead weight contributes to a bigger problem: Maritime shipping accounts for about 2.5 percent of global greenhouse-gas emissions. Barring a radical change, those emissions are set to surge in the decades ahead.

All this explains why eliminating a crew and its costs has been a longtime goal for companies and governments around the world. The most advanced effort so far has come from Rolls-Royce Holdings, which rolled out a virtual-reality prototype of an autonomous ship in 2014. According to the company, the ship will be 5 percent lighter, and burn up to 15 percent less fuel, than a comparable vessel with humans aboard.

That effort has been the subject of considerable skepticism. Seafarer unions doubt that technology can replace experienced sailors, and note that the International Maritime Organization, the United Nations agency that oversees shipping, prohibits crewless operations. But what seemed impossible three years ago is quickly becoming reality. Most of the sensor technology for autonomous ships is now commercially available, and crucial collision-avoidance tools have been around in various forms since the early 1990s.

The Yara Birkeland is a modest but important step forward. Although it can be operated remotely by a pilot, it will also be able to cruise on its own using an array of sensors, cameras and navigation tools, all guided by sophisticated algorithms. Back on shore, an operations center will monitor its progress.

When it launches next year, with a fully electric power plant, the ship will transport fertilizer from Yara’s factory to ports about 16 miles away, thereby replacing 40,000 shipments a year that had once been carried by polluting diesel trucks. That short route will give the ship’s owners — along with regulators and other autonomous shipping aspirants — a first chance to see such a vessel in operation.

Such trips may soon become routine. Norway has designated the waters off Trondheim as a test site for autonomous ships from container vessels to tugs. Rolls-Royce announced this year that it expects autonomous container ships in international waters within 10 to 15 years. Other groups are working to do it sooner: One British organization plans to have a solar-powered autonomous research vessel cross the Atlantic in 2019. Lloyd’s Register, the 250-year-old ship-classification group, has already issued guidance for crewless operations.

All this could potentially have enormous benefits for the shipping industry — and the world. Vast amounts of real-time data from the ships will allow fleet owners to optimize their routes (and profits) based on factors such as maintenance schedules, weather patterns, fuel prices and cargoes. Eventually, fleet owners might find themselves competing with the likes of Amazon.com and Alibaba Group Holding — major shippers with the big-data operations and deep pockets necessary to integrate autonomous ships into their logistics operations.

For those companies, “all hands on deck” already means fingers on a keyboard or a joystick. Within a decade or two, the maritime shipping industry may well be thinking the same way.  (Bloomberg View)