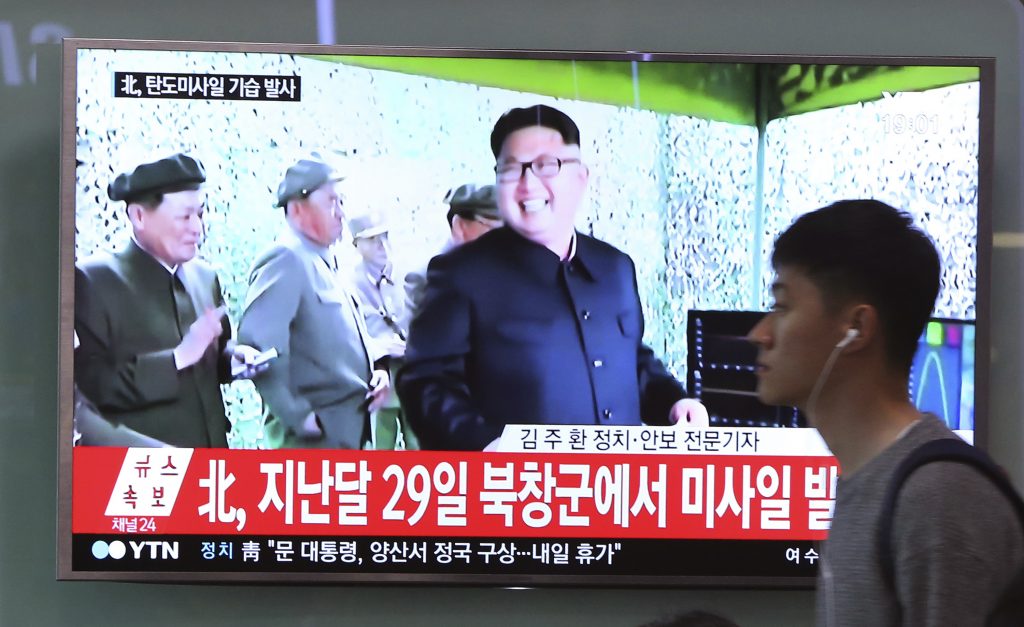 North Korea says it’s ready to deploy and start mass-producing a new medium-range missile capable of reaching Japan and major U.S. military bases there following a test launch, which it claims confirmed the missile’s combat readiness and is an “answer” to President Donald Trump’s policies.

The solid-fuel Pukguksong-2 missile flew about 310 miles and reached a height of 350 miles Sunday before plunging into the Pacific Ocean. North Korea’s media said more missiles will be launched in the future.

North Korean leader Kim Jong Un ordered the launch and watched from an observation post, state media reported Monday. The Korea Central News Agency said the test verified technical aspects of the weapon system and examined its “adaptability under various battle conditions” before it is deployed to military units.

Kim reportedly said the launch was a success, “approved the deployment of this weapon system for action” and said that it should “be rapidly mass-produced.”

North Korea has significantly sped up its missile tests over the past year or so and appears to be making tangible progress toward developing an arsenal that poses a threat not only to South Korea and Japan — which together host about 80,000 U.S. troops — but also toward an intercontinental ballistic missile capable of reaching mainland United States.

It’s moving ahead with its nuclear weapons program as well.

The North conducted two nuclear tests last year. It claims one was a hydrogen bomb and the other device created an explosion more powerful than any the North has previous tested. Satellite imagery suggests it could be ready to conduct its next test — which would be its sixth — at virtually any time.

Pyongyang’s often-stated goal is to perfect a nuclear warhead that it can put on a missile capable of hitting Washington or other U.S. cities.

North Korea’s media, meanwhile, have stepped up their calls for even more missile launches because of what Pyongyang claims is an increasingly hostile policy by President Donald Trump.

“The Trump administration would be well advised to lend an ear to the voices of concern that are heard from the U.S. and the international community,” the North’s Minju Joson newspaper said in a commentary Sunday. “Many more ‘Juche weapons’ capable of striking the U.S. will be launched from this land. This is the DPRK’s answer to the Trump administration.'”

“Juche,” in this usage, refers to domestically produced and DPRK is short for the North’s official name, the Democratic People’s Republic of Korea.

In an interview with “Fox News Sunday” U.S. Secretary of State Rex Tillerson said the ongoing testing is “disappointing” and “disturbing.”

South Korea held a National Security Council meeting after the launch, and its Foreign Ministry said the launch “throws cold water” on efforts to ease tensions on the peninsula.

At the request of diplomats from the U.S., Japan and South Korea, a United Nations’ Security Council consultation on the missile test will take place Tuesday.

North Korea a week earlier had successfully tested a new midrange missile — the Hwasong 12 — that it said could carry a heavy nuclear warhead.

Experts said that that rocket flew higher and for a longer time than any other missile previously tested by North Korea and represents another big advance toward a viable ICBM.

David Wright, an expert on North Korea’s missiles and nuclear program, who is with the Union of Concerned Scientists, said the latest missile could have flown farther but was fired on a “lofted” trajectory, which sends the missile high up so that it will land in the open seas rather than flying over or splashing down near neighboring countries.

He noted the Pukguksong-2’s solid fuel is of particular concern.

Solid-fuel missiles have their fuel loaded in them before being moved into place, allowing them to be launched faster and with more secrecy. Liquid-fuel missiles, on the other hand, are fueled at the launch site in a process that can last an hour and requires fueling and involves other vehicles. That makes then easier to spot and easier to destroy than the solid-fuel variety.