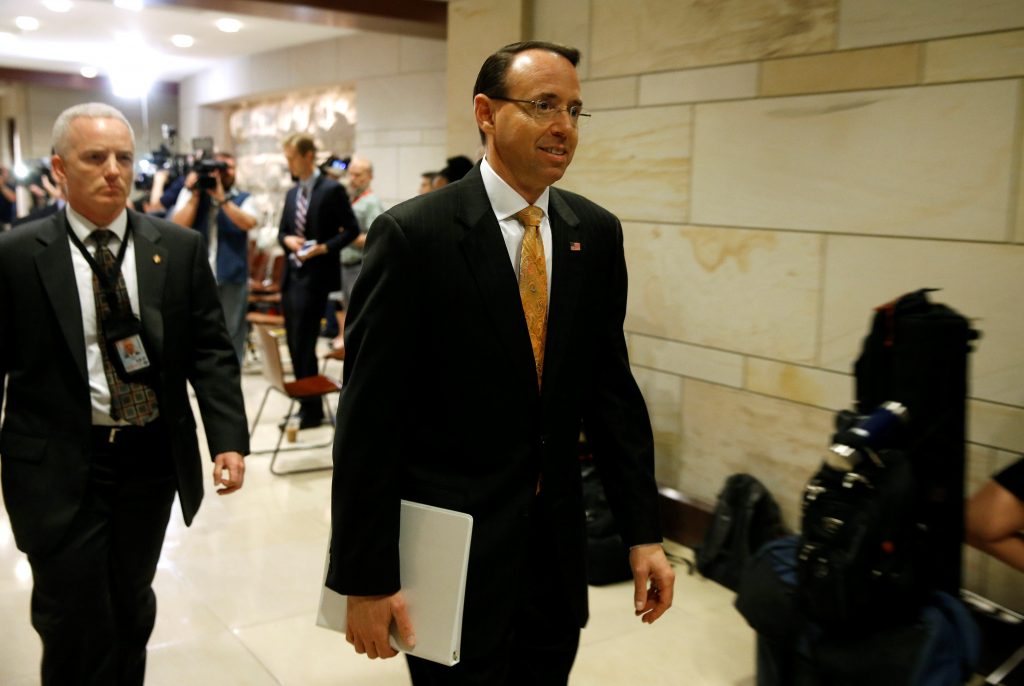 Deputy Attorney General Rod Rosenstein told Congress that he stands by a memo he wrote that the White House has cited as a justification for the firing last week of FBI Director James Comey. But he said he had no intention of it being used that way.

In closed-door meetings with lawmakers on Thursday and Friday, Rosenstein said he wrote the memo after President Donald Trump told him one day before the May 9 firing that he wanted to dismiss Comey. He said that though he was personally fond of Comey, “I thought it was appropriate to seek a new leader.”

The Justice Department on Friday issued a transcript of Rosenstein’s remarks.

The White House has struggled since Comey’s firing to explain the chain of events that led to it and who exactly made the decision. Trump said as recently as Thursday that he acted on a “very strong” recommendation from Rosenstein, but Rosenstein made it clear to Congress that he drafted his memo only after Trump told him of his plans to dismiss the FBI director.

He said he did not intend for the document to be a finding of misconduct or a “statement of reasons” to justify the firing, but he added: “I wrote it. I believe it. I stand by it.”

Rosenstein, who on Wednesday appointed Former FBI Director Robert Mueller as special counsel to investigate possible Russia-Trump campaign coordination during the 2016 presidential campaign, made his appearances before Congress as Trump was preparing to leave for his first foreign trip as president.

Congressmen said Rosenstein steered clear of specifics in answering questions about his appointment of Mueller, but he made clear that Mueller has wide latitude to pursue the investigation wherever it leads, potentially including criminal charges.

In Rosenstein’s meetings with lawmakers, he reiterated the scathing critique laid out in his memo concerning Comey’s handling of the investigation into Hillary Clinton’s use of a private email server, including Comey’s July news conference announcing that the FBI would not recommend charges.

“It explicitly usurped the role of the attorney general, the deputy attorney general and the entire Department of Justice,” Rosenstein said of that public announcement. “It violated deeply ingrained rules and traditions; and it guaranteed that some people would accuse the FBI of interfering in the election.”

Rosenstein said that he and Attorney General Jeff Sessions had “discussed the need for new leadership at the FBI” in one of their first meetings, and that he believed Comey had damaged the credibility of the bureau and the Justice Department through the Clinton case.

He denied media reports from last week that Comey had asked him for additional resources for his investigation before Trump fired him.