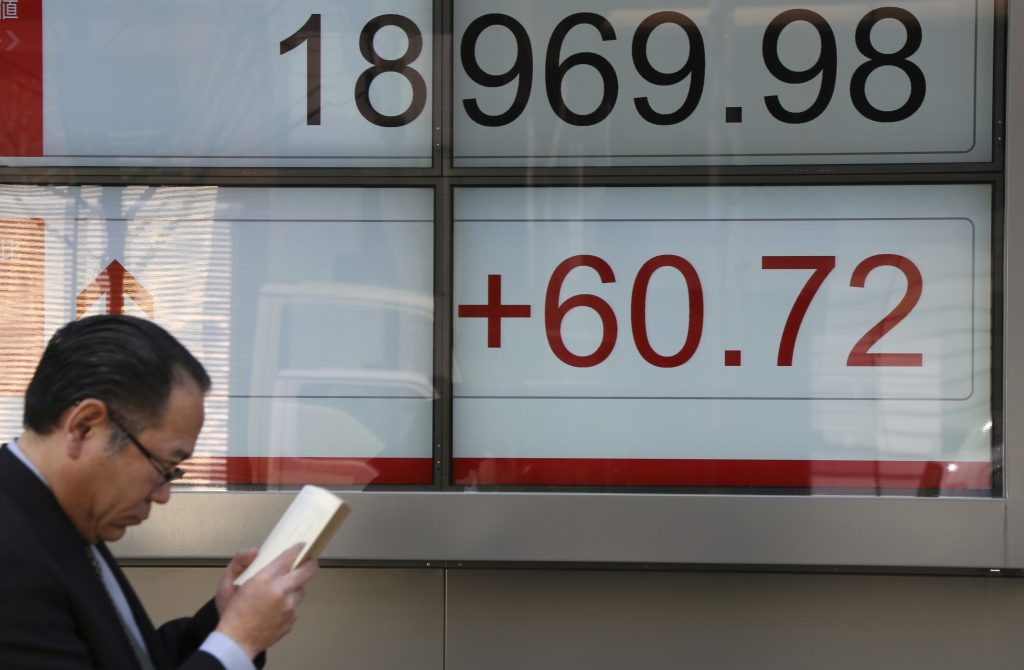 Asian stocks were slightly higher on Friday after a sluggish start, while the dollar held most of the gains it made overnight on strong U.S. economic data as some risk appetite returned despite caution over political turbulence in the United States.

Japan’s Nikkei rallied 0.1 percent, but remains headed for a 1.8 percent loss for the week.

Chinese shares were little changed, up 0.4 percent for the week. Hong Kong’s Hang Seng jumped 0.3 percent, set for a weekly rise of 0.1 percent.

Malaysian shares advanced 0.2 percent and the ringgit was almost 0.1 percent higher at 4.323 per dollar, after first-quarter gross domestic product grew at 5.6 percent from a year ago, the fastest pace in two years.

“The trend we have seen with Asian markets this morning has been one of mixed performances,” said Jingyi Pan, market strategist at IG in Singapore.

“While U.S. markets managed to stage a moderate recovery with investors finding good entry points after the heavy sell-off, Asian investors are likely choosing to err on the cautious side, especially with multiple event-risks in the week ahead.”

These events include testimony by former FBI director James Comey at a Senate hearing and an OPEC meeting in Vienna, she added.

President Donald Trump’s dismissal of Comey last week set off a political firestorm that led to Wall Street’s biggest sell-off in over eight months on Wednesday after media reported that Comey had written a memo stating that President Trump had asked him to drop a probe into his former national security adviser’s Russian connections.

On Thursday, President Trump tersely denied the allegations and decried a “witch hunt” against him.

The Justice Department’s appointment on Wednesday of a special counsel to probe possible ties between Russia and Trump’s presidential campaign helped calm markets and lifted Wall Street on Thursday.

The Dow gained 0.3 percent, the S&P was up 0.4 percent and the Nasdaq jumped 0.7 percent overnight.

It slumped 2 percent on Thursday, its biggest one-day loss since November. It was dragged down by an 8.8 percent slump in Brazilian stocks, on a report President Michel Temer supported an attempt to bribe a potential witness to remain silent in the country’s biggest-ever graft probe.

Temer refused on Thursday to resign after the Supreme Court authorized an investigation into the allegations. The investigation raised the possibility that a second Brazilian president could fall in less than a year and sparked doubts that Congress would pass Temer’s ambitious austerity agenda.

The Brazilian real was fractionally weaker at 3.3685 per dollar on Friday, after plunging as much as 8.5 percent to its lowest level since December on Thursday. The decline was the biggest since the currency was devalued in 1999 and wiped out all of this year’s gains.

Data showed a sharp acceleration in factory activity in the mid-Atlantic region in May, and an unexpected drop in new applications for unemployment benefits.

The dollar index, which tracks the greenback against a basket of six major peers, was slightly lower at 97.793, after gaining 0.3 percent on Thursday. It’s set to end the week 1.5 percent lower.

Bitcoin hit a record high of 1,910 in Asian trade. The digital currency has more than doubled since March, driven by soaring demand for crypto-assets with the creation of new tokens to raise funding for start-ups using blockchain technology.

On Thursday, it broke through $1.30 for the first time since September after news of better-than-expected British retail sales growth. But it fell back on technical selling and a stronger dollar to close 0.2 percent lower.

The euro also climbed 0.1 percent to $1.111.It touched a six-month high on Thursday but surrendered the gains to close 0.5 percent lower.

In commodities, oil prices continued their gains for the third straight session, set to post a 4 percent weekly rise, on optimism that producers will agree to rein in output for longer.

Global benchmark Brent was up 0.7 percent at $52.89, near a four-week high hit earlier.