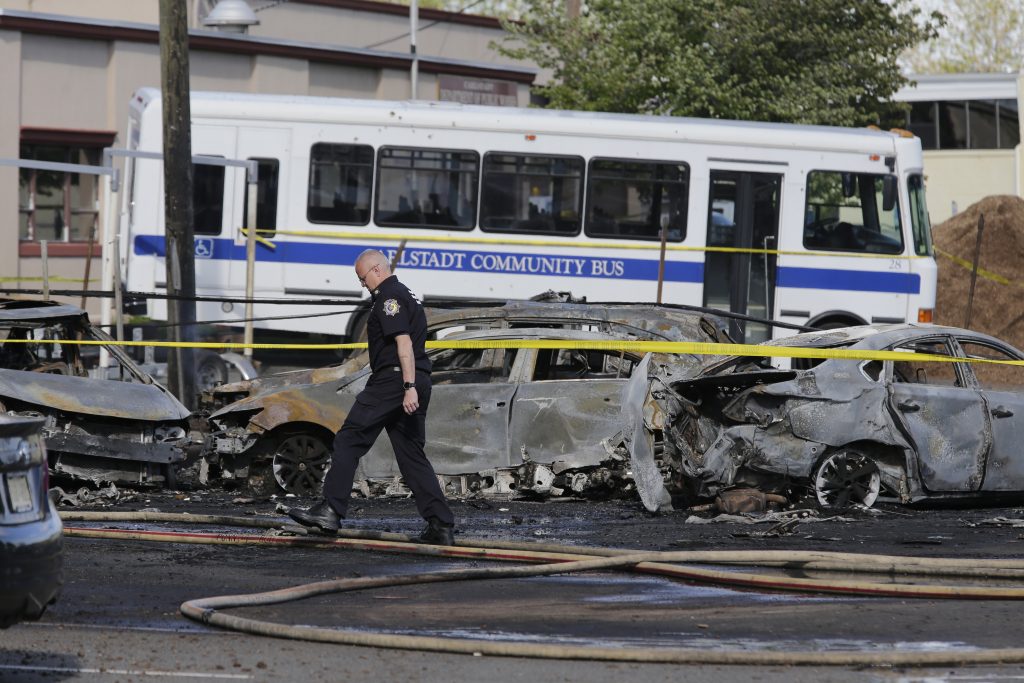 Federal investigators will be at the site of a deadly jet crash near a small airport outside New York City on Tuesday, working to determine what caused the aircraft to go down before bursting into flames.

Police said two crew members were killed when the Learjet 35 crashed among small warehouses and industrial buildings Monday afternoon in Carlstadt, a quarter-mile from the runway at Teterboro Airport. There were no passengers aboard and no one on the ground was reported injured.

Surveillance video from a nearby business shows the moment of impact and then a huge fireball. A man can be seen running across a parking lot toward the crash site as thick, black smoke spews into the air.

Two of the three buildings involved in the crash sustained fire damage.

Emergency responders worked for more than an hour to extinguish the blaze, which left a smoldering wreckage of cars in a parking lot. Police said 13 vehicles also were damaged.

The plane was registered in Billings, Montana, to a company called A&C Big Sky Aviation, which has a residential address. The owners of the residence are Daniel and Julane Wells. There was no answer at their home Monday night.

The airport was closed after the crash. Departing flights resumed in the evening, but no arriving flights were allowed.

Carlstadt Mayor Craig Lahullier said all town employees already had left for the day before the plane crashed next to the town’s public works building.

Town spokesman Joe Orlando said pieces of melted engine could be seen in the charred wreckage, along with wheels and part of the fuselage. Witnesses said they heard loud popping noises, apparently from car tires exploding in the heat and flames.

Orlando had left the public works building about 15 minutes before the plane hit. When he returned, he saw the plane’s engines on the ground.

“If this had happened 20 minutes earlier, people would have been at their cars,” he said. “That was the first thing I thought of: ‘I was just right there.’ You could see the fan blades, the landing gear. Car tires were blown off.”

Steve Case, an entrepreneur and co-founder of AOL who was aboard another plane at the airport waiting to take off, wrote in an Instagram post that the plane appeared to have missed a turn.

A Carlstadt police spokesman said the jet appeared to be listing before it crashed.

The National Weather Service warned of strong winds with gusts up to 45 mph just before the plane went down.

The cause of the crash remains under investigation. The National Transportation Safety Board will inspect the crash site Tuesday.

The jet had flown from Teterboro to Bedford, Massachusetts, early Monday morning. It then flew to Philadelphia later Monday morning before leaving for Teterboro in the afternoon.

Teterboro, which is owned by the Port Authority of New York and New Jersey, is the oldest operating airport in the New York City area. It sits in a densely populated residential and industrial area just north of MetLife Stadium.