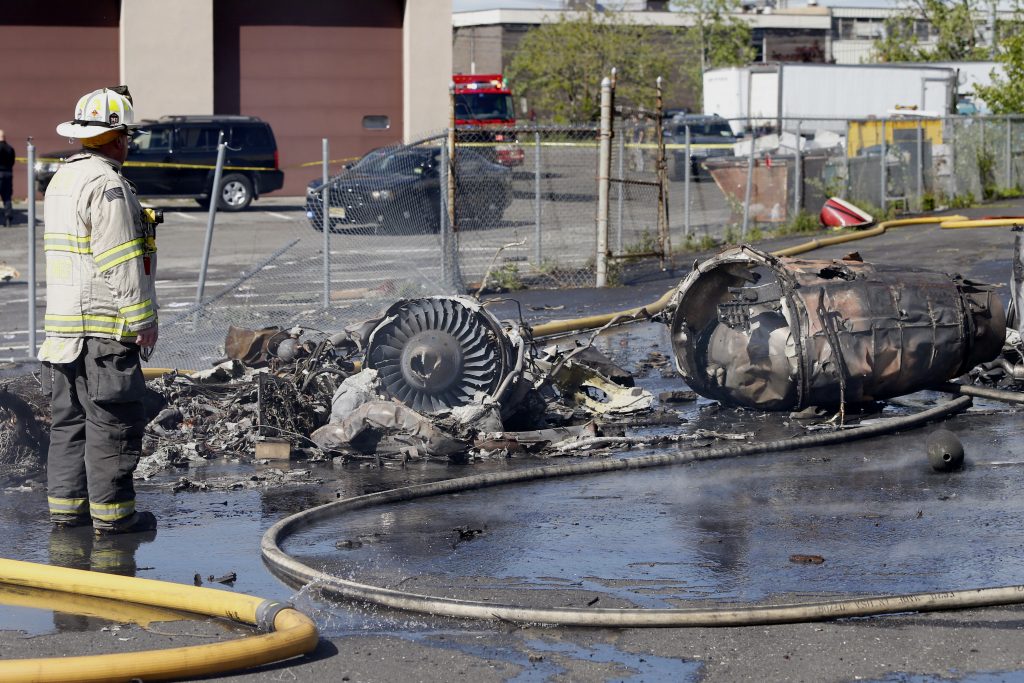 A Learjet crashed into a building near Teterboro Airport in New Jersey on Monday, killing two crew members and sparking a fire that sent thick, black smoke spewing into the air.

Police said no passengers were aboard the Learjet 35 when it went down around 3:30 p.m. Monday about a quarter-mile from the runway at Teterboro Airport, just west of New York City. No one on the ground was reported to have been injured.

Emergency responders reached the scene a short time later and worked for more than an hour to extinguish the blaze.

The plane crashed into a building in an industrial area, said Joe Orlando, a spokesman for the town of Carlstadt.

He said it crashed next to a township facility, but no one inside that building was harmed. He said pieces of melted engine could be seen in the charred wreckage, along with wheels and part of the fuselage.

A Carlstadt police spokesman said the jet appeared to be listing to its side before it crashed.

The cause of the crash is under investigation.

Steve Case, an entrepreneur and co-founder of AOL, wrote in an Instagram post that the plane appeared to have missed a turn. He was aboard another plane at the airport at the time.

The National Weather Service warned of strong winds with gusts up to 45 mph just before the plane went down.

The jet had flown from Teterboro to Bedford, Massachusetts, early Monday morning. It then flew to Philadelphia later Monday morning before leaving for Teterboro around 3 p.m.

Teterboro, which is owned by the Port Authority of New York and New Jersey, is the oldest operating airport in the New York City area. The busy site is the scene of dozens of takeoffs and landings each day and is a favorite landing spot for corporate and other luxury jets.