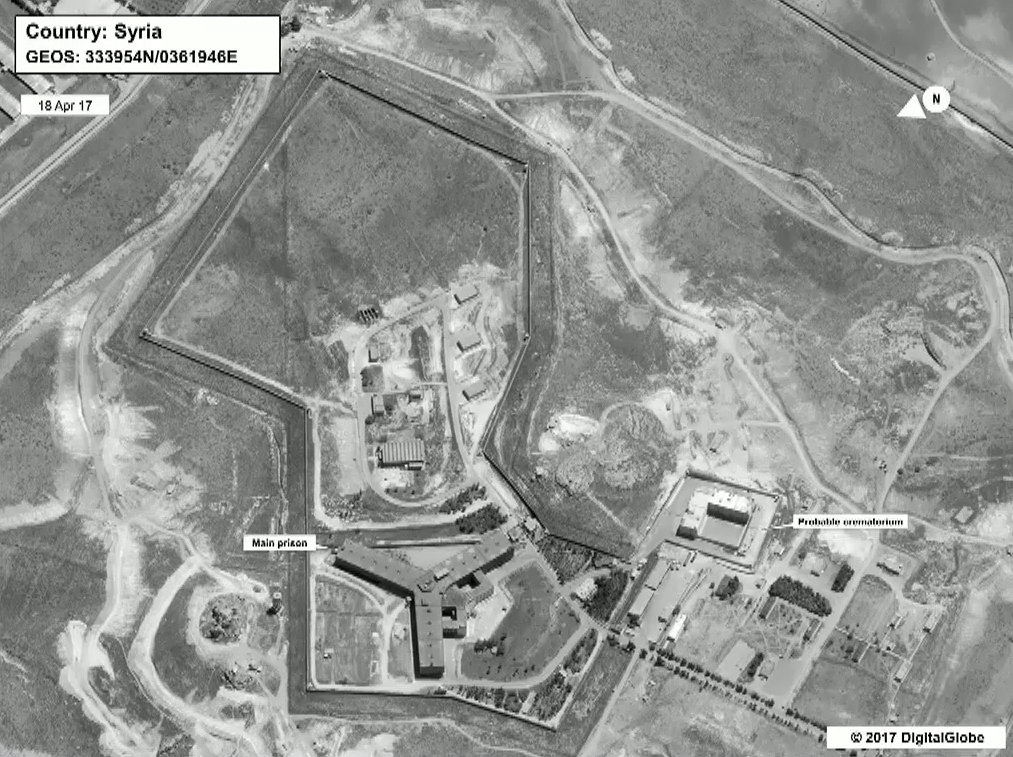 The United States has evidence Syrian President Bashar al-Assad’s government has built a crematorium at a large military prison outside the capital Damascus, a State Department official said on Monday.

Stuart Jones, acting assistant secretary of state for Near Eastern Affairs, said U.S. officials believe the crematorium could be used to dispose of bodies at a prison where they believe Mr. Assad’s government authorized the mass hangings of thousands of inmates during Syria’s six-year-old civil war.

“Credible sources have believed that many of the bodies have been disposed in mass graves,” Jones told reporters. During the briefing, he showed aerial images of what he said was a crematorium.

“We now believe that the Syrian regime has installed a crematorium in the Sednaya prison complex which could dispose of detainees’ remains with little evidence.”

Amnesty International reported in February that an average of 20 to 50 people were hanged each week at the Sednaya military prison north of Damascus. Between 5,000 and 13,000 people were executed at Sednaya in the four years since a popular uprising descended into war, it said.

Jones also said he was not optimistic about a Russia-brokered deal to set up “de-escalation zones” inside Syria. The deal was reached with support from Iran and Turkey during ceasefire talks in the Kazakh capital of Astana earlier this month. Jones attended the talks.

“In light of the failures of the past ceasefire agreements, we have reason to be skeptical,” Jones said.

Jones said Mr. Assad’s government had carried out air strikes, chemical attacks, extrajudicial killings, starvation, and other measures to target civilians and its opponents. He criticized Russia and Iran for maintaining their support for Assad despite those tactics.

“These atrocities have been carried out seemingly with the unconditional support from Russia and Iran,” Jones said. “The (Assad) regime must stop all attacks on civilian and opposition forces. And Russia must bear responsibility to ensure regime compliance.”

He did not say what measures the United States might take if Russia does not change its stance.

Tensions between the United States and Russia heightened after President Donald Trump ordered a cruise missile strike in April against a Syrian air base that the United States said had been used to launch a poison gas attack on civilians.

Jones said he had not yet presented the evidence to Russian officials. He said he hoped Russia would help pressure the Assad government.