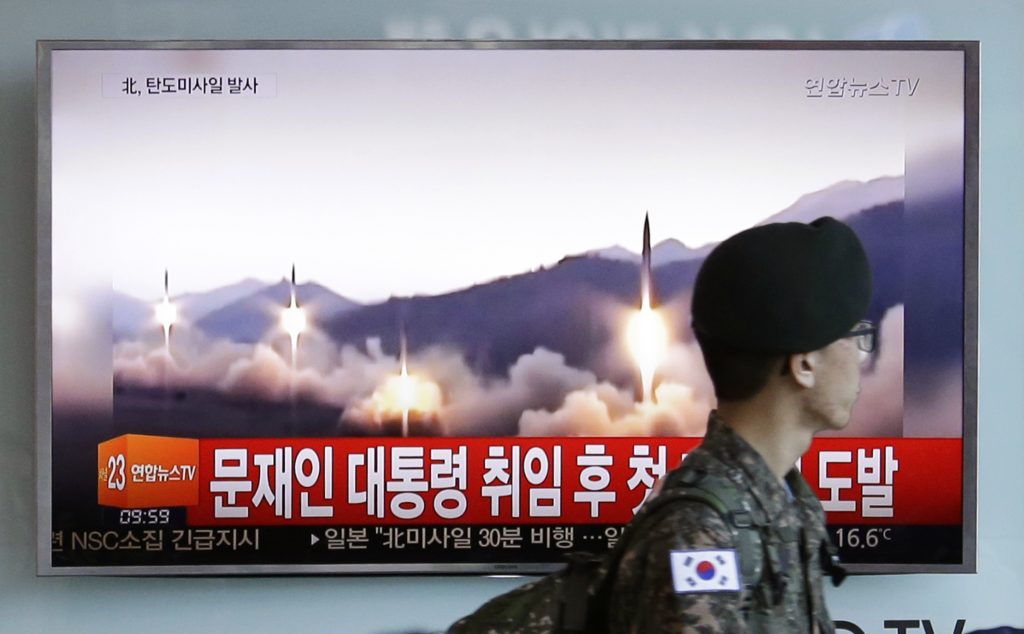 North Korea on Monday boasted of a successful weekend launch of a new type of “medium long-range” ballistic rocket that can carry a heavy nuclear warhead. Outsiders also saw a significant technological jump, with the test-fire apparently flying higher and for a longer time period than any other such previous missile.

Amid condemnation in Seoul, Tokyo and Washington, a jubilant North Korean leader Kim Jong Un promised more nuclear and missile tests and warned that his country’s weapons could strike the U.S. mainland and Pacific holdings.

North Korean propaganda must be considered with wariness — Pyongyang has threatened for decades to reduce Seoul to a “sea of fire,” for instance — but Monday’s claim, if confirmed, would mark another big advance toward the North’s goal of fielding a nuclear-tipped missile capable of reaching the U.S. mainland. Some experts, including officials in Tokyo, estimate that Sunday’s launch successfully tested a new type of missile, potentially the longest-range one in Pyongyang’s arsenal.

The test is also an immediate challenge to South Korea’s new president, Moon Jae-in, a liberal elected last week who expressed a desire to reach out to North Korea. Pyongyang’s aggressive push to boost its weapons program also makes it one of the Trump administration’s most urgent foreign policy worries, though Washington has struggled to settle on a policy.

Kim witnessed the test and “hugged officials in the field of rocket research, saying that they worked hard to achieve a great thing,” according to KCNA.

The rocket, “newly designed in a Korean-style,” flew 490 miles and reached a maximum altitude of 1,310 miles), the North said, and “verified the homing feature of the warhead under the worst re-entry situation and accurate performance of detonation system.”

South Korea’s Defense Ministry said more analysis was needed to verify the North’s claim on the rocket’s technological features. Spokesman Moon Sang Gyun said it’s still unlikely that North Korea has re-entry technology, which would return a warhead safely back into the atmosphere.

Japanese officials said Sunday that the missile flew for half an hour and reached an unusually high altitude before landing in the Sea of Japan.

Several South Korean analysts, including Lee Illwoo, a Seoul-based commentator on military issues, said the missile flew higher and for a longer period than any other the North has ever test-fired. North Korea has also launched satellites into orbit on long-range rockets that share some of the same technology as missiles.

North Korea is not thought to be able yet to make a nuclear warhead small enough to mount on a long-range missile, though some outside analysts think it can arm shorter-range missiles with warheads. Each new nuclear and longer-range missile test is part of the North’s attempt to build a nuclear-tipped intercontinental ballistic missile.

State media paraphrased the North’s leader as saying that “the most perfect weapon systems in the world will never become the eternal exclusive property of the U.S.,” warning that “the U.S. should not … disregard or misjudge the reality that its mainland and Pacific operation region are in [North Korea’s] sighting range for strike.”

The launch complicates the new South Korean president’s plan to talk to the North, and came as U.S., Japanese and European navies gather for joint war games in the Pacific.

“The president expressed deep regret over the fact that this reckless provocation … occurred just days after a new government was launched in South Korea,” senior presidential secretary Yoon Young-chan said. “The president said we are leaving open the possibility of dialogue with North Korea, but we should sternly deal with a provocation to prevent North Korea from miscalculating.”

Moon, South Korea’s first liberal leader in nearly a decade, said as he took his oath of office last week that he’d be willing to visit the North if the circumstances were right.

The U.N. Security Council will hold closed consultations about the launch on Tuesday afternoon, according to the U.N. Mission for Uruguay, which holds the council presidency this month.

U.S. ambassador to the U.N. Nikki Haley said on ABC that the United States has been working well with China, Pyongyang’s closest ally, and raised the possibility of new sanctions against North Korea, including on oil imports.

President Donald Trump’s administration has called North Korean ballistic and nuclear efforts unacceptable, but it has swung between threats of military action and offers to talk as it formulates a policy.

While Trump has said he’d be “honored” to talk with leader Kim under favorable conditions, Haley seemed to rule out the possibility. “Having a missile test is not the way to sit down with the president, because he’s absolutely not going to do it,” she told ABC.

The U.S. Pacific Command said the flight of Sunday’s test “is not consistent with an intercontinental ballistic missile,” a technology the North is believed to have tested clandestinely by launching rockets to put satellites in orbit.

David Wright, co-director of the Global Security Program at the Union of Concerned Scientists, said the missile could have a range of 4,500 kilometers (about 2,800 miles) if flown on a standard, instead of lofted, trajectory — considerably longer than Pyongyang’s current missiles. He said Sunday’s launch — the seventh such firing by North Korea this year — may have been of a new mobile, two-stage liquid-fueled missile North Korea displayed in a huge April 15 military parade.

Japanese Prime Minister Shinzo Abe told reporters that the launch was “absolutely unacceptable” and that Japan would respond resolutely.

The White House took note of the missile landing close to Russia’s Pacific coast and said in a statement that North Korea has been “a flagrant menace for far too long.”

Italian Premier Paolo Gentiloni said the G-7 summit his country is hosting later this month would discuss how to deal with the risk North Korea’s missile launchings pose to global security.

The launch came as troops from the U.S., Japan and two European nations gather near Guam for drills that are partly a message to North Korea. The USS Carl Vinson, an aircraft supercarrier, is also engaging with South Korean navy ships in waters off the Korean Peninsula, according to Seoul’s Defense Ministry.