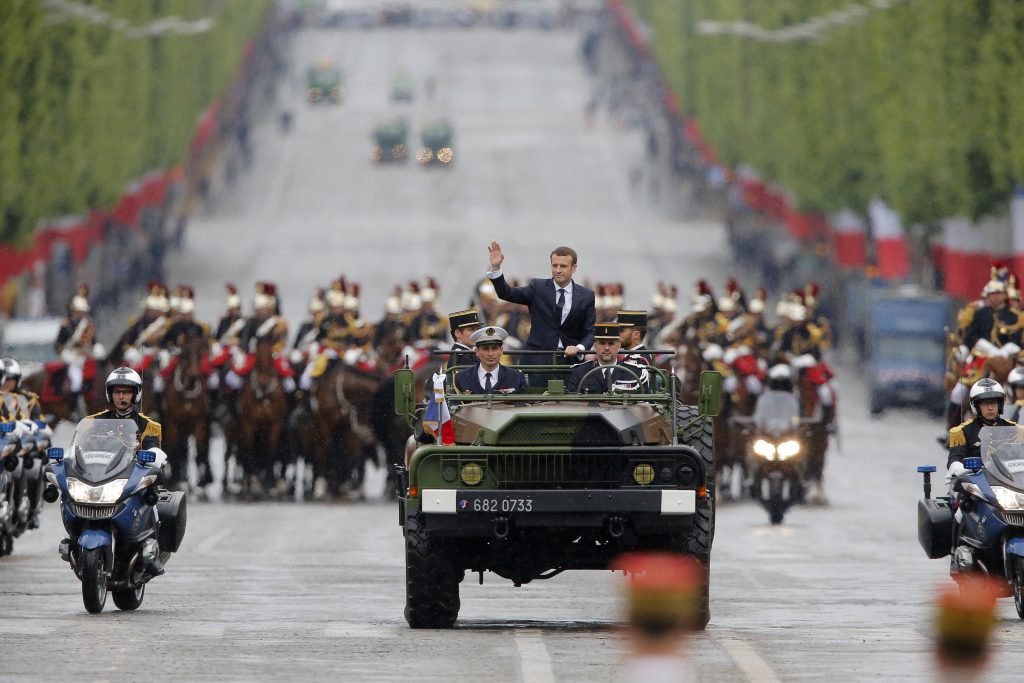 Emmanuel Macron was inaugurated Sunday as France’s new president at the Elysee Palace in Paris, and immediately launched into his mission to shake up French politics, world economics and the European Union.

After Mr. Macron was formally declared president, 21 cannon shots were fired from across the Seine River at the Invalides monument, where Napoleon is entombed.

Macron later solemnly paid tribute at the Tomb of the Unknown Soldier beneath the Arc de Triomphe, greeting veterans and military officers in formation beneath the imposing arch.

Pres. Macron takes charge of a nation that, when Britain leaves the European Union in 2019, will become the EU’s only member with nuclear weapons and a permanent seat on the U.N. Security Council.

Before the ceremony, he met for an hour with his predecessor, Francois Hollande, taking a last few minutes to discuss the most sensitive issues facing France, including the country’s nuclear codes.

In a visibly moving moment for both, Macron accompanied Hollande to his car, shaking hands and applauding him along with the employees of the French presidency who had gathered in the palace’s courtyard.

The two men had known each other well. Mr. Macron was Mr. Hollande’s former adviser, then his economy minister from 2014 to 2016, when Macron quit the Socialist government to launch his own independent presidential bid.

In his inauguration speech Sunday, Macron said he will do everything necessary to fight terrorism and authoritarianism and to resolve the world’s migration crisis. He also listed “the excesses of capitalism in the world” and climate change among his future challenges.

“We will take all our responsibilities to provide, every time it’s needed, a relevant response to big contemporary crises,” he said.

Mr. Macron announced his determination to push ahead with reforms to free up France’s economy and pledged to press for a “more efficient, more democratic” EU. France is a founding member of the 28-nation bloc and its third-largest economy after Germany and Britain.

About 300 guests, officials and family members gathered in the Elysee reception hall.

The new president arrived on the Champs-Elysees Avenue under a heavy rain – recalling Hollande’s inauguration five years ago – but unlike his predecessor, Pres. Macron managed to avoid getting wet. The bad weather often associated with the former Socialist president has become a joke for the French.

After his time at the tomb, Macron went to shake hands with supporters along the Champs-Elysees, who were taking selfies and waving French tricolor flags, before coming back to the palace for a lunch with his family.

Earlier, he and France’s new first lady briefly posed for photographers at the front porch of the palace after Hollande left. The couple will now live at the Elysee Palace.

Macron will also have to name his prime minister and form a government in the next few days.

He has promised to reinvigorate French politics by bringing in new faces. His Republic on the Move movement has announced an initial list of 428 candidates for the 577 seats up for grabs in France’s lower house of parliament in a vote in June. Mr. Macron is seeking to elect a majority of lawmakers so he can pass his programs.

Many of the Republic on the Move candidates are newcomers in politics. Their average age is 46, compared to 60 for the outgoing assembly. Half of them are women. Only 24 are lawmakers running for reelection, all Socialists.

Hollande, meanwhile, went on Twitter to describe the “terrible ordeals” that marked his five-year term, from deadly attacks to Greece’s debt crisis. He defended his unpopular presidency in a series of tweets minutes after leaving the Elysee Palace.

Hollande noted his accomplishments in getting the Paris Agreement on climate change, legalizing gay marriage and doing “everything possible to ensure that Greece stays in Europe.”

“We lived through crises but we held together. France remained France,” he tweeted.