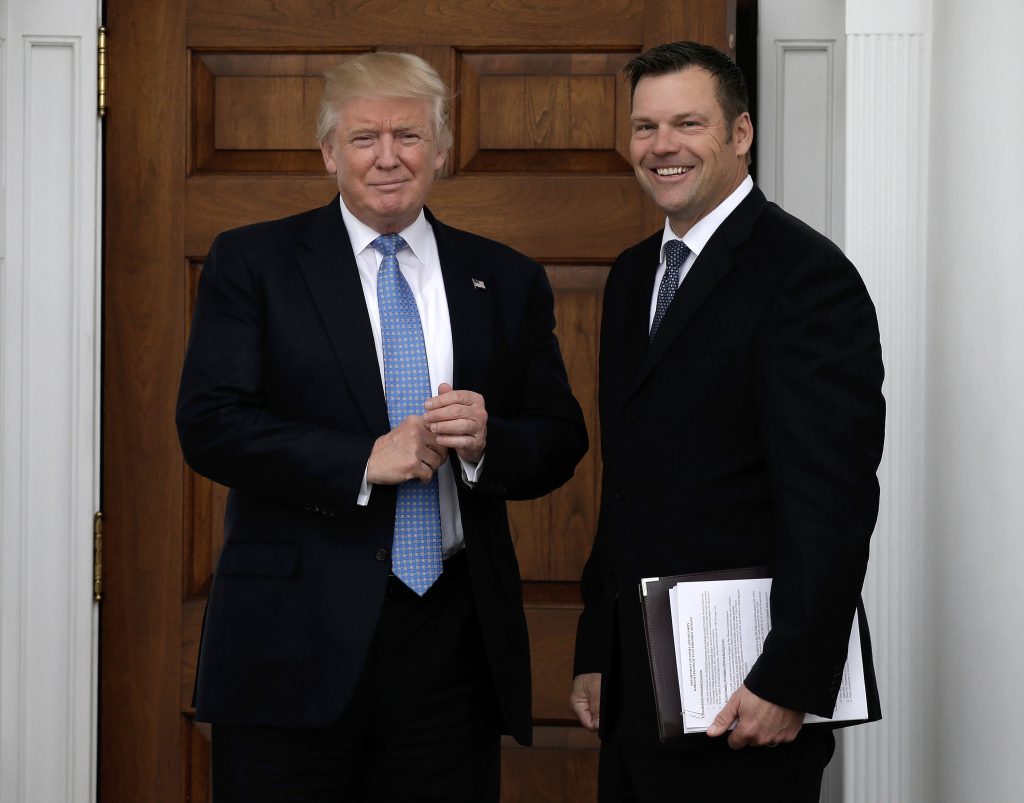 Kansas Secretary of State Kris Kobach has lost his appeal and has been ordered to turn over documents from his meeting with President Donald Trump to the ACLU by Friday.

U.S. District Judge Julie Robinson on Wednesday upheld an earlier order from a federal magistrate judge requiring Kobach to hand over the documents to the American Civil Liberties Union as part of an ongoing voting rights lawsuit against his office.

Robinson, who is based in Kansas City, Kan., and was appointed by President George W. Bush, gave Kobach a Friday deadline to comply with the order.

Kobach met with Trump in November and was photographed carrying a document labeled as a strategic plan for the U.S. Department of Homeland Security.

The photograph revealed a reference to voting rolls. The ACLU has sought access to the documents, contending that if Kobach lobbied Trump on changes to federal voting law it would be relevant to the case.

“When somebody fights this hard to keep documents away from us it leads us to believe there’s something there and we need to see it,” said Doug Bonney, chief counsel for the Kansas chapter of the ACLU.

“The amount of energy that has gone into this fight is quite extraordinary in my experience,” said Bonney, who noted that standards for discovery in lawsuits are lenient.

Kobach has argued that the documents are protected by Trump’s executive privilege. The judge rejected the argument that “no court has ever recognized that this privilege applies before a president takes office.” President Trump also did not assert his privilege in this case.

Samantha Poetter, Kobach’s spokeswoman, said the office is currently reviewing the ruling and has no further comment. Under the order, Kobach will be able to redact portions of the documents not relevant to voting law.

The judge’s order also will require Kobach to hand over a draft of a proposed amendment, which he has crafted and shared with employees in his office, that would make changes to the National Voter Registration Act. The court rejected Kobach’s claim that this document was protected by attorney-client privilege because he shared it with an attorney in his office.

The ACLU’s lawsuit centers on a Kansas law that requires voters to provide proof of citizenship, such as a birth certificate or passport. Robinson temporarily blocked Kobach from enforcing for the requirement for people who had registered at the DMV under the federal motor voter law for the 2016 election.

The ACLU is seeking to make that exemption permanent. Bonney said that once the discovery issues in the case are resolved the focus will shift back to that goal.

The case could have national ramifications because Kobach has served as an informal adviser to Mr. Trump on voting issues.

Bonney said that Kobach could theoretically file an extraordinary motion with the 10th Circuit Court of Appeals in Denver, but “the bar is very high” for such motions.

“I’ve never had anyone file one on a discovery order,” Bonney said. “I’ve been practicing for 32 years, and it’s never even occurred to me that I might want to take a discovery order up (with the appeals court) or that my opponent might.”