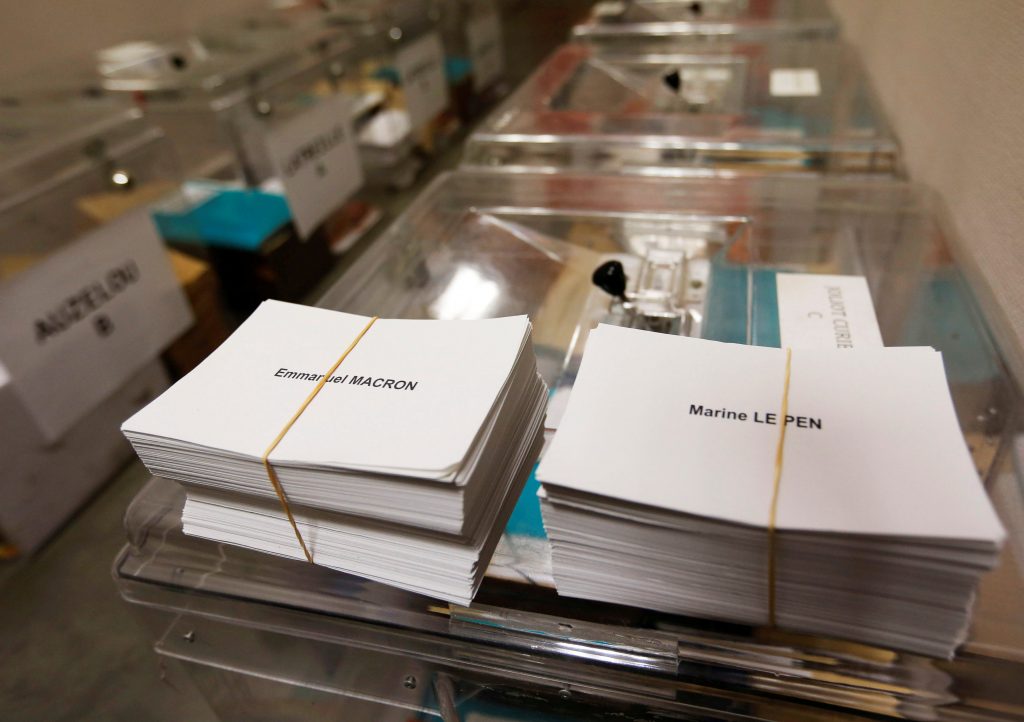 The election commission met early Saturday after reports of the hacking attack emerged just before midnight Friday, when a mandatory pause in campaigning is required.

The commission urged French media and citizens “not to relay” the leaked documents “in order not to alter the sincerity of the vote.” French electoral laws impose a news blackout Saturday and most of Sunday on any campaigning and media coverage seen as swaying the election.

The perpetrators of the hacking attack remain unknown and it’s unclear whether the document dump would dent Macron’s large poll lead over Le Pen going into the vote.

Fears of hacking and campaign interference have simmered throughout France’s high-stakes, closely watched campaign – and boiled over Friday night as Macron’s team said it had been the victim of a “massive and coordinated” hack.

In a cursory look at the leaked documents, they appear to be largely mundane day-to-day communications, with a few items so out of character that they might be fakes. Other documents, which seem to date back several years, don’t appear related to the campaign at all.

The Macron team’s announcement about the hacking attack came just 10 days after the campaign’s digital chief, Mounir Mahjoubi, said it had been targeted by Russia-linked hackers – but that those hacking attempts had all been thwarted.

Mahjoubi did not respond to requests for comment amid the campaign blackout Saturday.

Meanwhile, voting for France’s next president started in some overseas territories Saturday.

The first French territory to vote was Saint-Pierre-et-Miquelon, an archipelago located near Newfoundland. Shortly afterward, voting also started in French Guiana and the French West Indies.

The 44-hour legal blackout on campaigning began Friday at midnight and is due to last until Sunday at 8:00 p.m. when the last polling stations close on the mainland and the first pollsters’ projections and official partial results are expected.

The future of the European Union may hinge on the vote, also seen as a test for global populism.

Someone on 4chan – a site known, among other things, for cruel hoaxes and political extremism – posted links to a large set of data. Macron’s campaign swiftly confirmed it had been hacked some weeks ago and that at least some of the documents were genuine.

Slamming the hack as an effort to “seed doubt and disinformation” and destabilize the presidential vote, Macron’s movement En Marche said it would “take all measures” to shed light on what happened. It recalled similar leaks from Hillary Clinton’s U.S. presidential campaign.

The French presidential campaign has been unusually bitter, with voters hurling eggs and flour, protesters clashing with police and the candidates insulting each other publicly  – a reflection of the deep divisions and public disaffection with politics.

Le Pen, 48, has brought her far-right National Front party, once a pariah for its racism and anti-Semitism, closer than ever to the French presidency, seizing on working-class voters’ growing frustration with globalization and immigration. Even if she loses, she is likely to be a powerful opposition figure in the upcoming parliamentary election campaign.

“We changed everything,” win or lose, Le Pen said in an interview with The Associated Press on Friday.

Many voters, however, don’t like either Le Pen or Macron. They fear her party’s racist past, while worrying that his platform would demolish job protections for workers. Students in several Paris schools protested Friday against both the candidates.