Technology Are Fidget Spinner Toys Too Much of a Distraction?
Health, Science & Technology 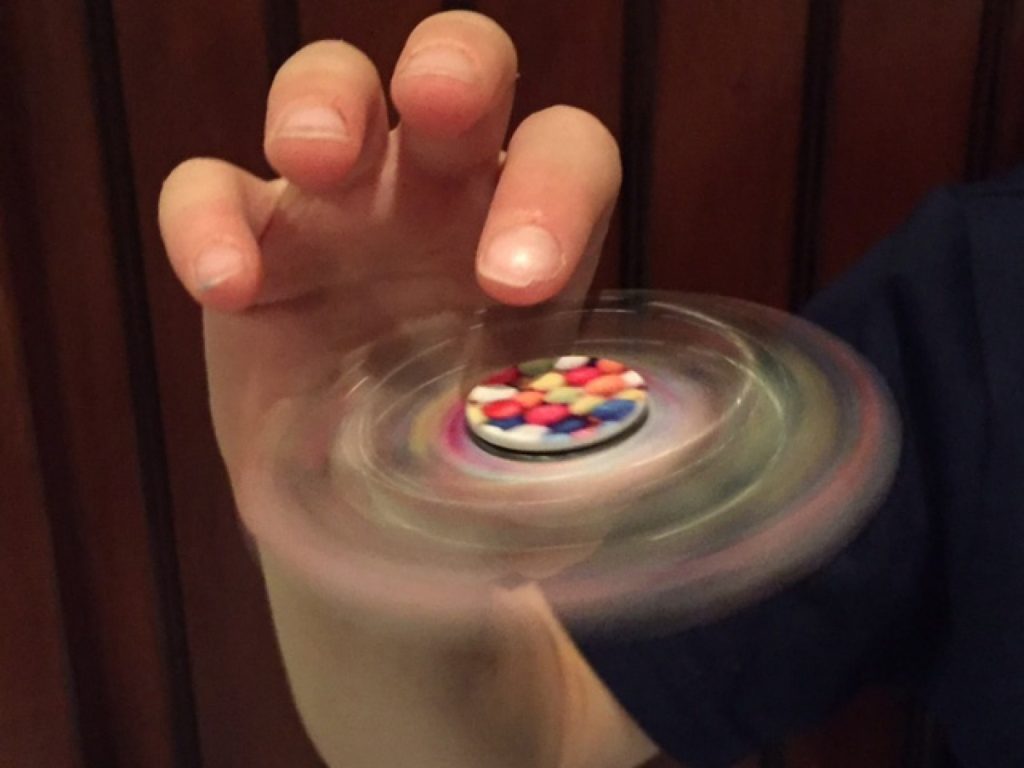 Melissa Ferry is a big believer in the benefits of allowing students to use fidget toys in the classroom.

She points to research indicating that playing with fidget toys – little gadgets, cubes, putties and spinners – is effective in improving concentration and focus in students with ADHD. She also has seven years’ worth of anecdotal evidence that shows how beneficial they can be for some children.

“If we see students are unfocused, getting up to use the washroom, sharpening their pencil frequently or causing a disturbance, they might need a sensory tool to help them focus,” says Ferry, a special-education teacher at Ganiard Elementary School in Mount Pleasant, Michigan, who also writes for The Friendship Circle, a blog geared toward the special-education community. “There are lots of adaptive learning tools; just like some kids need glasses, others need fidgets.”

She maintains a wide selection for her students to choose from, and she also helps them make stress balls filled with sand, oatmeal or flour.

Ferry points to one case study involving a sixth-grade classroom in Georgia, in which students who were given stress balls increased their average scores on a writing assessment from 73 percent to 83 percent; those with a medical diagnosis of ADHD improved their results by 27 percent.

Her pro-fidget toy stance is a good thing for her students, now that the gadgets are all the rage among kids.

Cathy Siegel, owner of Party Rock, a small party supply store in Toronto, says she began stocking the toys in February and now she can’t keep them on her shelves. “It’s craziness,” she said. “This weekend we sold over 200 spinners alone.”

While some shoppers are buying fidgets to help manage ADHD symptoms, Siegel says most customers buy them from her store because they don’t want to be the only one without the popular toy. “Once one kid bought one, everyone wanted one. It’s a trend,” she says.

They are so popular that some teachers have banned them in the classroom. Some schools in Manchester, England, made headlines recently when they announced a fidget toy ban via text message, enraging parents of special-needs students in the process.

“At first I thought it was brilliant that other kids had them because he wouldn’t have to answer any questions or feel awkward using it,” one mom told the Manchester Evening News, “but now that they’re being banned in schools, it means he will have to lose an aid that is extremely beneficial to him.”

Seventh-grade science teacher Cory Sicard recently banned them in his class at Sierra Middle School in Parker, Colorado, and says many of his colleagues are doing the same.

“The need for these spinners stemmed from a desire to control the symptoms of ADHD,” Sicard said. “Unfortunately the spinners can also take children’s attention away from what they are seeing and hearing. Plus, the spinning and movement serves as a distraction to other students in the room.”

And theft became an issue.

“Now that kids can’t pull them out in class, there’s less incentive for others to steal them,” Sicard said. “Out of sight, out of mind, which is how most of the kids feel toward them now.”

Sicard says parents at his school were understanding. Even students were supportive.

“Most kids will pull out a fidget spinner in class and are easily distracted by it, also distracting other students around them,” wrote Jade Miracle in the school’s student-run newspaper, the Sierra Summit Online. “Students can also forget these items in the classroom if they leave in a rush, putty will most likely end up on a floor, or stuck to a computer, fidget cubes or spinners can be forgotten under or on desks then found and taken by another student.”

Despite such support, outright bans on fidgets concern experts such as Claire Heffron. A pediatric occupational therapist in Cleveland, Heffron says the whole discussion needs to be reframed.

“These little gadgets should be called fidget tools, not toys, and they can be part of a successful strategy for managing fidgety behavior if they are introduced as a normal part of the classroom culture,” she says.

Heffron says there need to be rules about when and how fidgets can be used if they are to be part of an effective learning strategy, rather than a distraction. Fidgets should also be part of a much larger discussion, she says, about managing behavior in classrooms and what the school day looks like for

Julie Schweitzer, a clinical psychologist at the MIND Institute at the University of California at Davis, has been studying ADHD for 25 years. Her 2015 study, published in the journal Child Neuropsychology, measured the impact of fidgeting on cognition among a group of children ages 10 to 17. Her work revealed that students with ADHD performed better on a computerized attention test the more intensely they fidgeted. Meanwhile, typical children did not improve their test score with fidgeting. While her test results were interesting, she can’t endorse fidget toys yet.

She points out that people have been fidgeting for years (think the Rubik’s Cube) and that chewing gum or tapping your foot might be less disruptive but just as effective in satisfying a need to fidget.

“We need to study them to find if they make a difference and for whom,” Schweitzer says.

In the meantime, experts say fidgets can be successfully incorporated in classrooms, with the following rules to minimize disruptions to learning:

– If you’re not using it, leave your fidget on the table or keep it in your desk;

– When you need it, use it in your lap so others don’t see you playing with it;

– Teachers should explain that fidgets are a learning tool, not a toy, so students understand the purpose they’re serving;

– Parents can talk to their kids about how and why fidgets are used in school and at home, to reinforce these guidelines.

Silver is a writer and blogger based in Toronto.