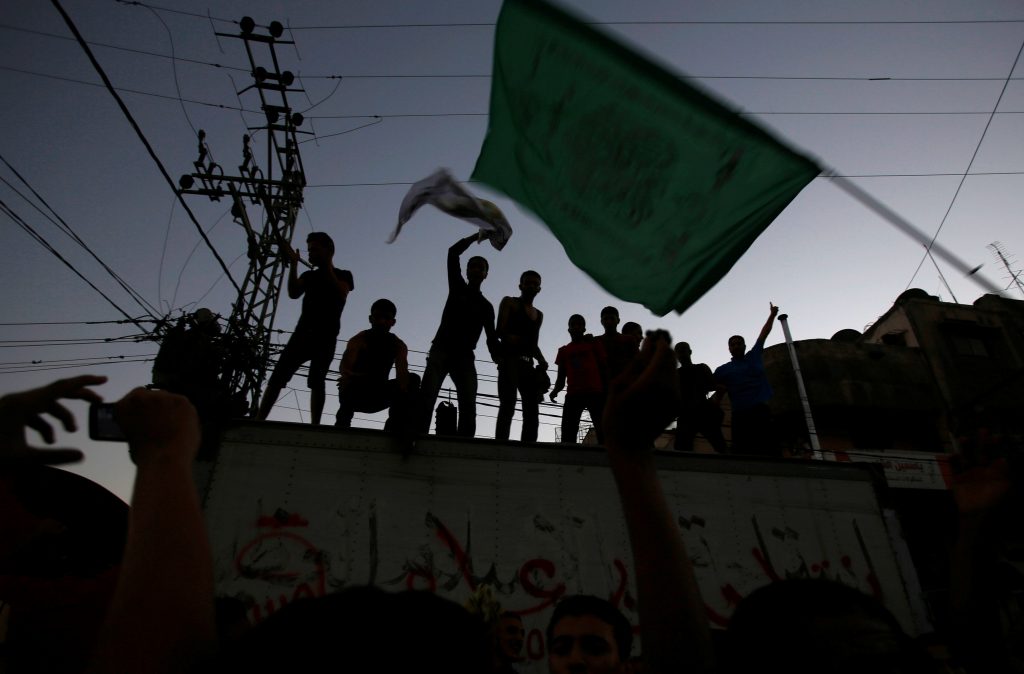 Hamas was expected to present a new charter on Monday, in advance of the meeting Wednesday between Palestinian Authority chief Mahmoud Abbas and U.S. President Donald Trump. Hamas sources said that the release of the charter at this time is no accident: It is a signal to both Trump and Abbas that Hamas is a force to be contended with and cannot be ignored.

The new charter includes some revisions. Jews are not the enemy, the charter emphasizes; Zionists are, but a Zionist is anyone who lives in, or was born in Israel and has not consciously rejected Zionism, and has served in the IDF. The charter also recognized and accepts that a Palestinian state will be established in the “occupied territories” of Yehudah and Shomron liberated by Israel in the 1967 Six Day War, but it does not recognize Israel’s existence in the rest of “historic Palestine,” which still belongs to the “Palestinian people.”

The charter also authorizes Arabs to accept the “struggle against occupation” on nonviolent terms, although violence is not excluded as part of this “struggle.” In addition, the charter formally declares Hamas an independent group, and no longer a subsidiary of the Muslim Brotherhood, as declared in the previous charter issued in 1988 declared.

The new charter, Hamas sources say, positions the group to compete in the international diplomatic arena, providing those who are wont to support it with a document that they can point to, which shows the group subscribing to international norms.

The move appears aimed at improving relations with Gulf Arab states and Egypt, which label the Muslim Brotherhood as a terrorist organization, as well as with Western countries, many of which classify Hamas as a terrorist group over its hostility to Israel.

Sources said Hamas will say in the document that it agrees to a transitional Palestinian state along the borders from the 1967 Six Day War, when Israel liberated eastern Yerushalayim, Yehudah and Shomron. Israel withdrew from Gaza in 2005.

A future state along the 1967 borders is the goal of Hamas’s main political rival, the Fatah movement led by Palestinian leader Mahmoud Abbas. His Palestinian Authority has engaged in peace talks with Israel on that basis, although the last, U.S.-mediated round collapsed three years ago.

The revised Hamas political document, to be announced later on Monday, will still reject Israel’s right to exist and back “armed struggle” against it, the Gulf Arab sources told Reuters.

Hamas has fought three wars with Israel since 2007 and has carried out hundreds of armed attacks in Israel since it was founded three decades ago.

It remains unclear whether the document replaces or changes in any way Hamas’s 1988 charter, which calls for Israel’s destruction and is the Islamist group’s covenant.

A Hamas spokesman in Qatar declined to comment. There was no immediate comment from Egypt and Gulf Arab states.

Israel said that Hamas was trying to delude the world with the new charter.

“Hamas is attempting to fool the world, but it will not succeed,” said David Keyes, a spokesman for Prime Minister Binyamin Netanyahu. “They build terror tunnels and have launched thousands upon thousands of missiles at Israeli civilians. This is the real Hamas.”

Analysts say the revised document could allow Hamas to mend relations with Western countries and pave the way for a reconciliation agreement with the PLO, now also headed by Abbas.

U.S.-allied Arab states including Egypt, the United Arab Emirates and Saudi Arabia classify the Muslim Brotherhood a terrorist organization. The 89-year-old Brotherhood held power in Egypt for a year after a popular uprising in 2011.

The Brotherhood denies links with Islamist terrorists and advocates Islamist political parties winning power through elections, which Saudi Arabia considers a threat to its system of absolute power through inherited rule.