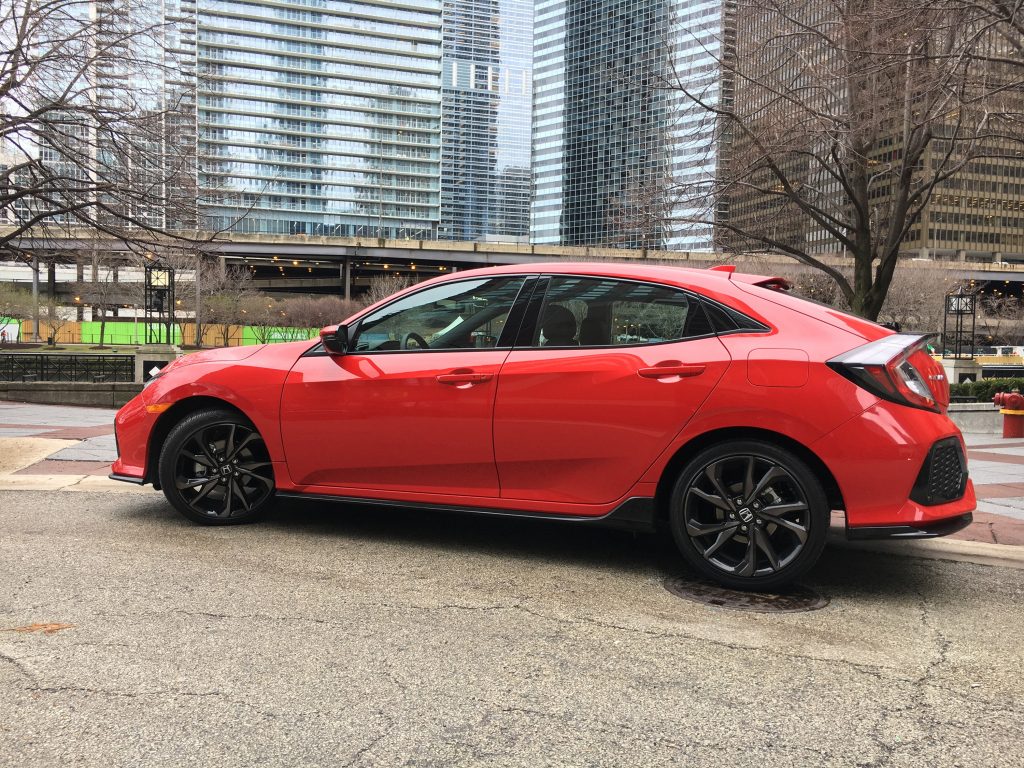 Good things don’t necessarily come in small packages. It’s more like good things make great use of space. The 2017 Honda Civic hatchback is one of the roomiest compact hatches, which makes it competitive not just with other hatches but with America’s darling, the compact crossover.

The Civic hatch returns after a 12-year hiatus in the American market, riding a swell of popularity after the redesigned Honda Civic sedan, which won 2016 North American Car of the Year.

Like the sedan, the Civic hatch swings from the boring side of its predecessor to the edgy. It’s over 4 inches shorter than the sedan, and a bit taller while maintaining the same interior roominess. That results in a more fastback — or insect-back, depending on who you ask — curve of the roofline. The front and rear overhangs are short, with a black splitter up front and black accents on the rockers below the doors. There are giant black vents in the fascia that more functionally house fog lights. The black wheels on our top of line Sport Touring trim complement the black cladding on the mirror mounts and window trim. It all looks pretty impressive.

The rear is where things can get wacky. There’s an integrated rear spoiler in the hatch roof, and a wing on the hatch that bridges the C-shaped taillights. Giant black vents flank the center-mounted twin tailpipes for no apparent reason other than looks. It evokes a European hot hatch without any hotness coming from the 180-horsepower turbocharged engine.

It looks better suited for the 306-horsepower Type R hot hatch finally arriving on U.S. shores this spring. The 1.5-liter engine in the Civic hatch is efficient more so than powerful, averaging a combined 32 mpg that we were easily able to beat. For more driving thrills, opt for the six-speed manual available on the Sport trim instead of the fuel-saving continuously variable transmission. The powertrain is fine at this price; there’s a little lag when the pedal is mashed, but the handling is solid enough to have fun in the turns.

The fully loaded Sport Touring impresses on the inside, especially with the clever use of space. The center console has a configurable storage area that can hide cup holders when not in use. The elbow rest slides forward above it, or it can be slid back to fit two smaller drinks, more European than American-sized. Then there’s a storage console. Another storage area is hidden beneath the center stack to charge phones or hide valuables. A cord portal to the storage shelf under the climate buttons means there’s easy phone access while charging.

The bug-back hatch tops the competition with 25.7 cubic feet of cargo room. We fit two hockey bags, which we can’t do in some compact crossovers. There’s also a neat tonneau cover that rolls up into the size of a rolling pin, and can be mounted on either the left or right side or easily stowed in one of the door side panels, meaning there’s no long bar that either needs to be removed from the car or stored lengthwise when the seats are down.

The aggressive styling carries over to the instrument cluster and steering wheel. Red accent lights sharpen the gauges on Sport Touring, and a 7-inch display lets drivers toggle between audio and nav functions.

That part of the system, though, feels like as big a missed opportunity as the touch screen. You can change radio stations but can only look at the other features like navigation, turbo power and fuel economy. To reset the trip odometers, however, you still use the old stick. Accessing phone functions must be done through the touch screen or voice commands.

The touchscreen, and the lack of a volume knob, doesn’t impress, but few touch screens do. We’re relieved there aren’t two stacked screens as there are in the Accord: it’s just too much to look at. Honda’s technology is finally catching up and is leagues better than main rival Toyota.

The Civic in Sport Touring comes standard with Honda Sensing, the $1,000 package of advanced safety features that is so much more impressive than the touch screen.

Honda Sensing includes adaptive cruise control and lane-keep assist, which can maintain the lane and adjust speed to the car in front of it, the precursor to self-driving cars. Many makes offer similar technology, but Honda is one of the first to offer it with what it calls low-speed follow, which can maintain the distance of the lead car to a stop. It also includes LaneWatch, which uses a camera on the right side mirror to project on the screen what’s in your blind spot, such as bicyclists. Using the right-turn indicator also temporarily disables voice commands to limit distractions.

While the price tag may seem a lot for this fully loaded hatch, it’s actually a good value for everything offered. It’s smart, stylish, clever on the inside but a bit too clever on the outside, though it stands out in a field awash with similarity.

2017 Honda Civic Hatchback at a glance