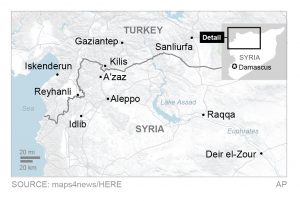 Air Force Col. John Dorrian said Turkey’s warning to the coalition’s air operations center described a large area and wasn’t specific enough about timing and location to ensure the safety of the American forces. Dorrian, spokesman for the U.S. operations against Islamic State terrorists in Iraq and Syria, said the U.S. troops were about six miles, or 10 kilometers, from the strikes.

Dorrian said Turkey gave the U.S. less than an hour’s notice, and declined to be more specific. But a senior U.S. official said it was about 20 minutes. The official was not authorized to discuss the details publicly, so spoke on condition of anonymity.

The Turkish attacks killed at least 20 Syrian Kurdish fighters in the People’s Protection Units, or YPG. Another 18 were wounded, according to the group. The U.S. considers the YPG one of the most effective rebel groups fighting IS in Syria.

Strikes in northern Iraq killed five members of the Iraqi Kurdish militia, known as the peshmerga, another partner in the anti-IS coalition.

Turkey considers the YPG part of the Kurdistan Workers’ Party, or PKK, which is a terrorist organization. Turkey has said the strikes were conducted to prevent infiltration of Kurdish rebels, weapons, ammunition and explosives from Syria and northern Iraq into Turkey.

Speaking to reporters at the Pentagon, Dorrian said the U.S. is concerned that Turkey didn’t coordinate the strikes with the U.S.-led coalition against the Islamic State group.

“We let the Turks know that the amount of time that was being provided for the strikes was inadequate for us to assure safety of our forces on the ground,” said Dorrian.

There have been other incidents when Turkey has conducted strikes, often with similar notice, and the U.S. will make sure to detail where American forces are within the potential strike zone so they are not hurt.