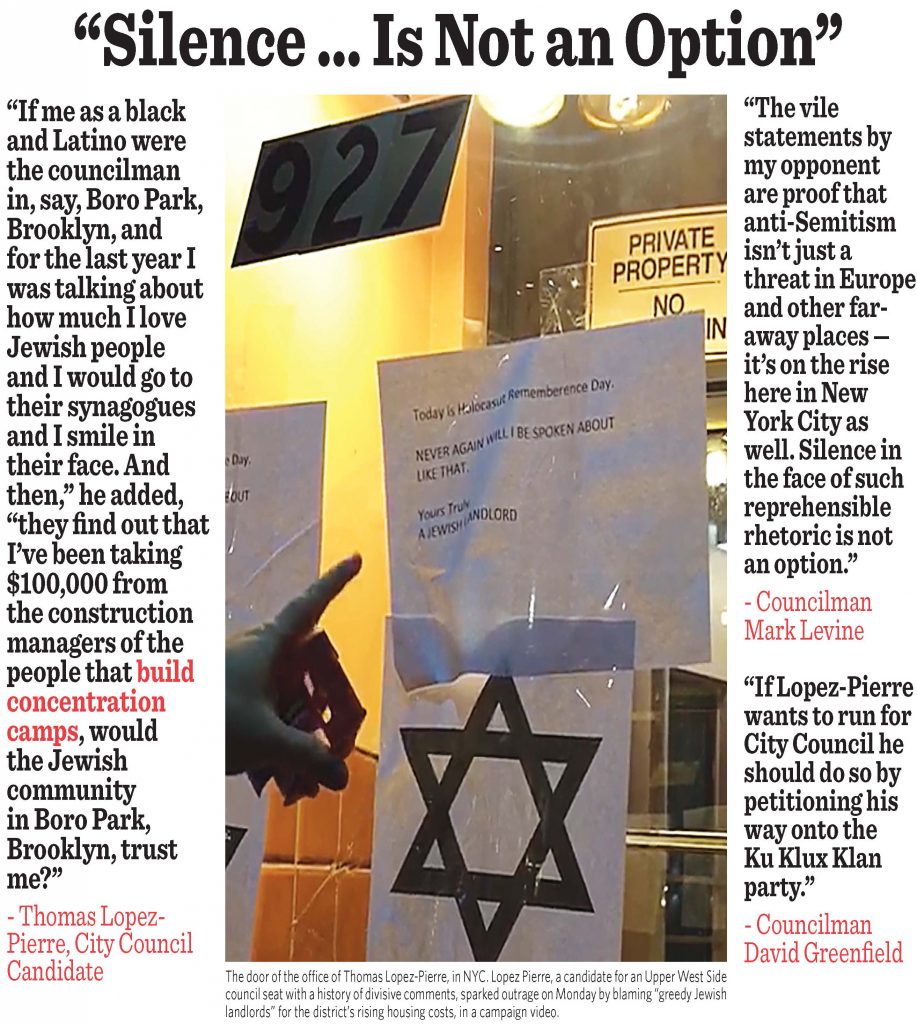 A candidate for an Upper West Side council seat with a history of divisive comments outraged the Jewish community on Monday by blaming in a campaign video “greedy Jewish landlords” for the district’s rising housing costs.

In a follow-up conversation with Hamodia, Thomas Lopez-Pierre on Tuesday said that in his black and Latino community, Jewish landlords are the same as “builders of concentration camps.” He accused the incumbent, Councilman Mark Levine, of being “hypocritical” for accepting campaign funds from them.

Levine, who chairs the council’s Jewish Caucus, slammed the comments, vowing to run his first reelection campaign “based on the principles of tolerance of people of all backgrounds and rejection of bigotry in any form.”

“The vile statements by my opponent are proof that anti-Semitism isn’t just a threat in Europe and other far-away places — it’s on the rise here in New York City as well,” Levine said in a statement emailed to Hamodia. “Silence in the face of such reprehensible rhetoric is not an option.”

Lopez-Pierre claimed he had “a lot of Jewish friends” but declined to name any of them or make them available for Hamodia.

He repeated the claim that 80 percent of real estate in his district are owned by Jewish landlords, who have been “leading the charge to displace low-income black and Latino tenants.” He referred to Levine as “a very nice Jewish boy” who is a “hypocrite” for professing to work for the community while taking money from Jewish landlords.

“If me as a black and Latino were the councilman in, say, Boro Park, Brooklyn, and for the last year I was talking about how much I love Jewish people and I would go to their synagogues and I smile in their face. And then,” he added, “they find out that I’ve been taking $100,000 from the construction managers of the people that build concentration camps, would the Jewish community in Boro Park, Brooklyn, trust me?”

Questioned on the appropriateness of comparing the issue to the Holocaust, Lopez-Pierre did not back down.

Councilman David Greenfield issued a sharp condemnation of Lopez-Pierre’s “disgusting” comments, calling on Manhattan’s Democratic Committee to expel him from the party.

“Quite frankly,” said Greenfield, a Democrat from south Brooklyn, “if Lopez-Pierre wants to run for City Council he should do so by petitioning his way onto the Ku Klux Klan party.”

Greenfield said it was preposterous to blame landlords for the housing affordability crisis which is squeezing residents across the city. “Blaming Jews for societal ills is the oldest of anti-Semitic propaganda and must not be tolerated anywhere, much less in our diverse city,” he said.

In a letter to Democratic committee chairman Keith Wright, Greenfield called on him to remove Lopez-Pierre under New York election law, which permits removal for “disloyalty to the party.”

“So long as Lopez-Pierre refuses to disavow his hateful rhetoric,” Greenfield wrote in the letter, made available to Hamodia, “he is showing willful and damaging ‘disloyalty’ to the values of the Democratic Party.”

The district consists of 45 percent Latino population, 20 percent African-American and 25 to 30 percent white. Ten percent of the district is Jewish.

As little as about 70 years ago, the district was a thriving Jewish population center. That changed as blacks moved in and the Harlem Renaissance occurred. The past two decades has seen the district transformed again, with Hispanics gradually gaining a majority. The district elected a Hispanic congressman for the first time last year.

Lopez-Pierre said he was not worried he would be evicted from the party, as Greenfield requested.

“Let me make sure I get this straight. Councilman Greenfield, who chairs the Land Use committee, which is basically the real estate committee for the City of New York, are we talking about that David Greenfield?” he said. “OK, I look forward to working with him when I become a councilman in September — that’s my quote.”

It is not Lopez-Pierre’s first run-in with controversy about Jews. In Levine’s first race four years ago, he called the candidate a “White/Jewish candidate” who was trying “to sneak into office like a thief in the night.”

At the time, the city’s political leadership held a news conference to condemn the remarks. It was attended by Tish James, then a councilwoman and currently the Public Advocate. Levine says he expects a similar wave of censure now.

“Leaders from across the political spectrum have told me that they will be coming out with statements of condemnations in the next couple of days,” he said.