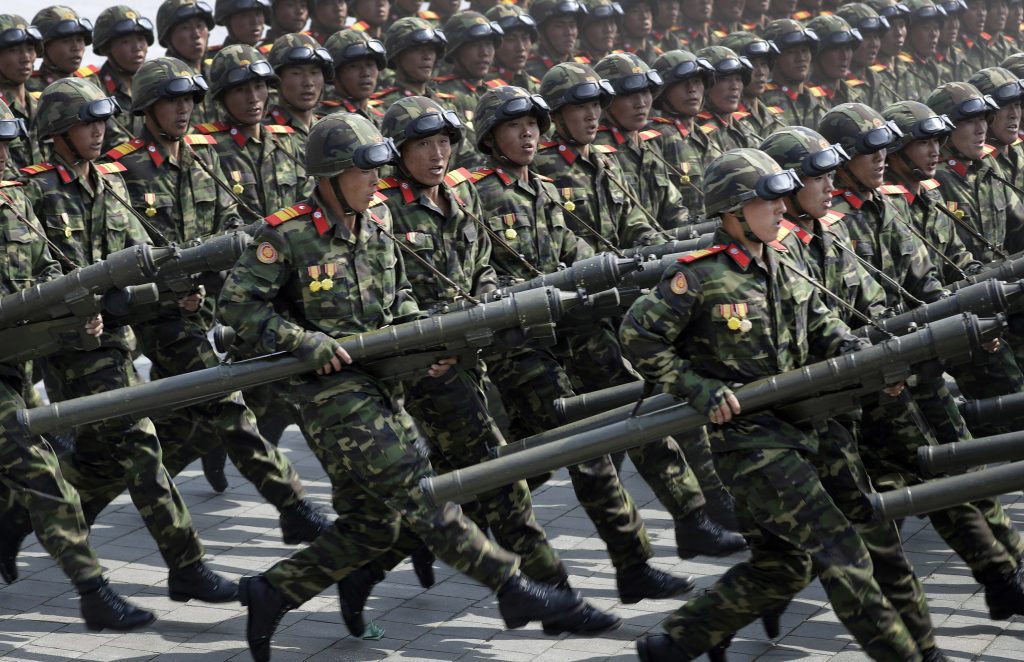 North Korea marks the founding anniversary of its military on Tuesday, and South Korea and its allies are bracing for the possibility that it could conduct another nuclear test or launch an intercontinental ballistic missile for the first time.

North Korea often marks significant dates by displaying its military capability. It so far has carried out five nuclear tests.

Such a move could test the developing North Korea policies of President Donald Trump, who has reportedly settled on a strategy that emphasizes increased pressure on North Korea with the help of China, the North’s only major ally, instead of military options or trying to overthrow North Korea’s government.

Japanese Prime Minister Shinzo Abe and President Trump agreed to urge North Korea to refrain from what PM Abe called provocative actions. “The North Korean nuclear and missile problem is an extremely serious security threat to not only the international community but also our country,” the Japanese leader told reporters in Tokyo afterward.

South Korea’s Defense Ministry has said North Korea appears ready to conduct such “strategic provocations” at any time. South Korean Prime Minister Hwang Kyo-ahn, the country’s acting leader in place of ousted President Park Geun-hye, who has been arrested over corruption allegations, has instructed his military to strengthen its “immediate response posture” in case North Korea does something significant on Tuesday’s anniversary.

There is also a possibility that North Korea, facing potential changes in regional dynamics as Washington presses Beijing to pressure North Korea more aggressively, will opt to mark the anniversary with a missile launch of lesser magnitude. North Korea separately fired what U.S. officials said were a Scud-type missile and a mid-range missile earlier this month, but the launches were analyzed as failures.

While the U.S. has dispatched what President Trump called an “armada” of ships to the region, including an aircraft carrier, U.S. officials have told The Associated Press that the administration doesn’t intend to militarily respond to a North Korean nuclear or missile test. South Korea’s Yonhap news agency reported Monday that South Korean naval ships will conduct a training exercise with the aircraft carrier, the USS Carl Vinson.

In a statement released late Friday, North Korea’s Foreign Ministry accused Trump of driving the region into an “extremely dangerous phase” with the dispatch of the aircraft carrier and said the North was ready to stand up against any threat posed by the United States.

With typical rhetorical flourish, the Ministry said North Korea “will react to a total war with an all-out war, a nuclear war with nuclear strikes of its own style, and surely win a victory in the death-defying struggle against the U.S. imperialists.”

Adding to the tensions, North Korea detained a U.S. citizen on Saturday, bringing the number of Americans being held there to three. The reasons for the detention of Tony Kim, who taught accounting at the Pyongyang University of Science and Technology, weren’t immediately clear.

Under Kim’s leadership, North Korea has been aggressively pursuing a decades-long goal of putting a nuclear warhead on an ICBM capable of reaching the U.S. mainland.

Last year, North Korea conducted two nuclear tests, which would have improved its knowledge in making nuclear weapons small enough to fit on long-range missiles. It also launched a long-range rocket last year that delivered a satellite into orbit, which Washington, Seoul and others saw as a banned test of missile technology.

On April 15, North Korea offered a look at its advancing nuclear weapon and missile programs in a massive military parade in Pyongyang honoring late state founder Kim Il Sung, the grandfather of the current ruler.

The displayed military hardware included prototype ICBMs and new mid-range solid-fuel missiles that can be fired from land mobile launchers and submarines, making them harder to detect before launch.

The parade also featured previously unseen large rocket canisters and transporter erector launcher trucks, or TELs. This indicated that North Korea is developing technologies to “cold-launch” ICBMs, ejecting them from the launch tubes before they ignite in midair, which would prevent its limited number of ICBM-capable launcher trucks from being damaged and also allow the missiles to be fired from silos.

Analysts say North Korea is also likely developing solid-fuel ICBMs, and that some of the canisters might have contained prototypes.

North Korea had earlier shown signs it was working on a new ICBM.

In March, North Korean state media reported that the country successfully conducted a ground test of a new high-thrust rocket engine, which it said was a breakthrough for its space program and efforts to create “Korean-style strategic weapons.” Kim was quoted as saying that “the whole world will soon witness what eventful significance the great victory won today carries.”

While North Korea almost certainly needs more time to create a solid-fuel ICBM, test launches for its existing liquid-fuel ICBMs, including KN-08s and KN-14s, could come much sooner.

Experts say these missiles could one day be capable of hitting targets as far as the continental United States, although North Korea has yet to flight test them.