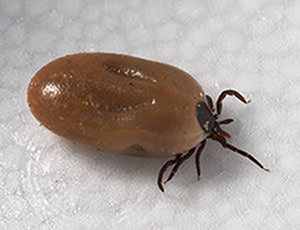 It started with fever and vomiting. Then the 5-month-old baby developed facial twitching, stiffening of his right arm and seizures. The family rushed him to Connecticut Children’s Medical Center.

Clinicians there performed tests, including a brain MRI that showed clear signs of a serious infection. The testing showed that the baby didn’t have meningitis, an infection in the tissues surrounding the brain. But he did have an unusual pattern of inflammation in the very deep parts of his brain.

Doctors didn’t know what was causing the inflammation. But the parents said that two weeks earlier, they had pulled a tick off the baby’s knee, and that the tick had been there for two to three hours. The parents told doctors that the tick was probably carried in on someone’s clothing who was out hunting, who then held the baby before changing clothes.

Nicholas Bennett was the infectious disease specialist who treated the boy when he was brought to the hospital in early November. It was too late in the year for the infant to have been exposed to mosquitoes, which can transmit viruses that cause encephalitis, or inflammation of the brain.

Instead, the clues suggested a rare tick-borne illness known as Powassan virus disease. Bennett had trained in Upstate New York, where doctors had seen cases of the illness, which can be fatal in up to 10 percent of cases. He also had read studies saying that the disease had been found in ticks in Connecticut.

Many people who become infected with the virus do not develop symptoms, but it can cause encephalitis and meningitis. Symptoms can include fever, headache, vomiting, weakness, confusion, loss of coordination, speech difficulties and seizures. There is no specific medicine to cure or treat Powassan virus disease.

An infected tick can transmit Powassan virus as quickly as 15 minutes after attachment. By comparison, Lyme disease and other tick-borne infections can take as long as one to two days to transmit, and the tick has to stay attached the whole time, he said.

“Taking into account the story, the MRI findings and the time of year, there was really only one virus it could be,” said Bennett, director of the hospital’s division of pediatric infectious diseases and immunology and author of a report released Thursday by the Centers for Disease Control and Prevention.

Bennett requested testing for the disease, which can only be done at the CDC. It was confirmed, making it the first reported human case in Connecticut. Officials said the case highlights the importance of considering Powassan virus disease when there are clinical symptoms that could be compatible, and of obtaining a comprehensive exposure history.

The infant’s seizures were controlled with medication and he was sent home after seven days. But one month after the onset of symptoms, his parents noticed that he could not sit up without help, something he had been able to do before he got sick. Four months after his illness, when he was 10 months old, he was reported to have normal motor and verbal development, was crawling, walking with a walker and babbling, the report said. The baby also had a distinct left-handed preference, an indication of right-sided weakness most likely caused by infection in the left side of the baby’s brain, Bennett said.

Powassan virus disease is rare. An average of seven cases were reported annually in the United States between 2006 and 2015, the CDC report said. Most cases have occurred in the Northeast and Great Lakes areas during the late spring, early summer and mid-fall, when ticks are most active. Several states (Minnesota, New Hampshire and Virginia) reported their first Powassan virus disease cases during the past seven years, the report said. It’s not known whether this represents a spread of the virus within the local tick population, or increased testing and recognition of the virus as a cause of human disease.

“I think we need to think more often about testing for it,” Bennett said. “We don’t know how frequent infections are, and I think it can help give families and patients better advice about what to expect if we can identify and follow patients who get this infection.”

The hospital has standard tests to check for viral causes of encephalitis, but it doesn’t include Powassan. “So it could easily have been missed,” Bennett said. “In fact, I’m sure that there could have been cases in kids and adults that have slipped under the radar. Many cases of encephalitis never get a cause identified, and that’s probably because in at least some cases we’re not using all the right tests.”

Bennett said he has ticks in his back yard and has pulled them off every family member.

It’s very possible that clinicians are only diagnosing the worst cases and that those who don’t have symptoms go undiagnosed. “It would be an important study to assess how widespread this infection really is in the ticks and the people who live in those affected areas,” he said.

The other lesson is that people should perform prompt tick checks and removal. After being in outdoor areas where ticks are present, the recommendation is to immediately shower and change clothing, and check for ticks.

The Ixodes scapularis ticks that can transmit the virus are often very small, he said, from about the size of a pinhead up to the size of an apple seed, and can be easily missed. The tick is also the primary vector of Lyme disease.