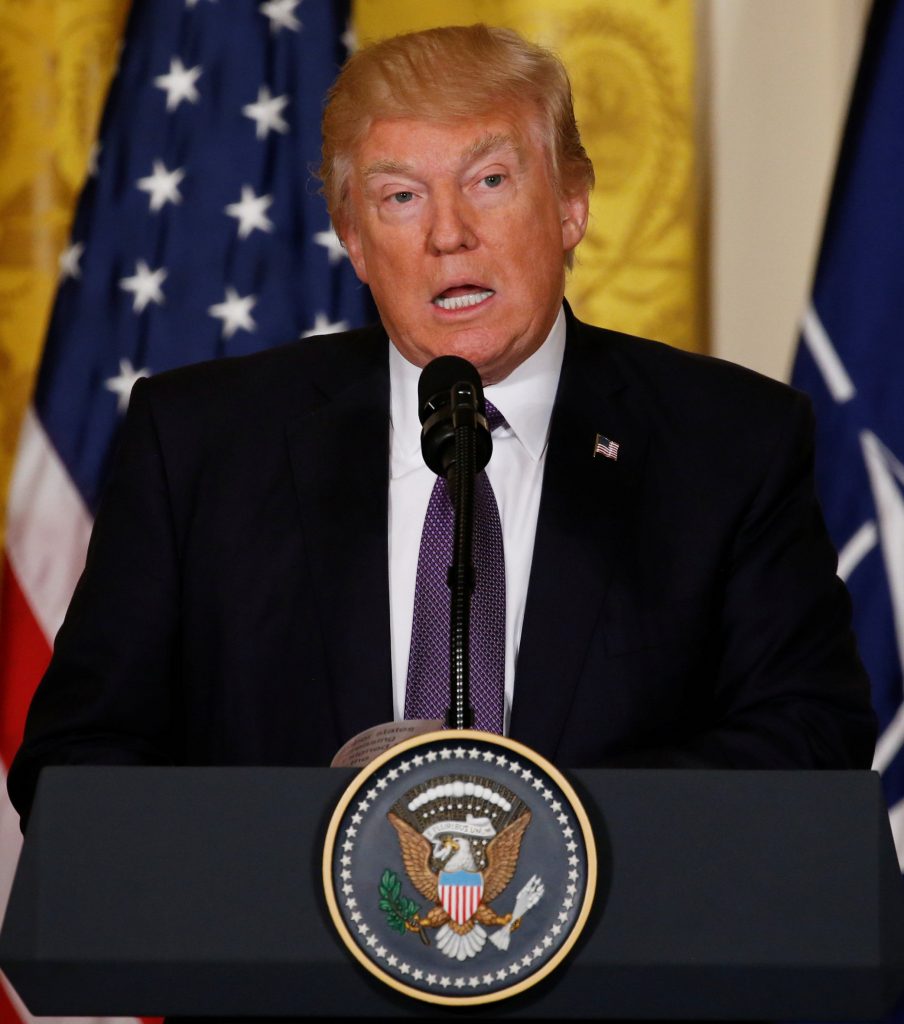 Presidents Donald Trump of the United States and Vladimir Putin of Russia on Wednesday both presented souring views of the relationship between their two countries, exchanging sharp words as Moscow extended an icy welcome to the United States’ top diplomat in a face-off over Syria.

In Washington, Trump said the United States’ relationship with Moscow “may be at an all-time low.”

Trump’s comments came after he made the biggest foreign-policy decision of his new presidency last week, firing missiles at Syria to punish Moscow’s ally for its suspected use of poison gas. Russia condemned the U.S. action.

Hours earlier on Wednesday, Russian President Vladimir Putin was equally pessimistic, saying in an interview broadcast on Russian media, “The level of trust on a working level, especially on the military level, has not improved but has rather deteriorated.”

The rhetorical salvos came as U.S. Secretary of State Rex Tillerson received an unusually hostile reception in Moscow, where any hope that the Trump administration would herald less-confrontational relations was dashed in the week after the U.S. missile strike on Syria.

Tillerson met Putin in the Kremlin after talking to Foreign Minister Sergei Lavrov. The Kremlin had previously declined to confirm that Putin would meet Tillerson, reflecting the renewed tensions.

Trump had frequently called during the 2016 presidential-election campaign for warmer ties with Putin, despite criticism from lawmakers in his own Republican Party.

But the civil war in Syria has driven a wedge between Moscow and Washington, upending what many in Russia had hoped would be a transformation in relations, which reached a post-Cold War low under Trump’s predecessor, Barack Obama.

As Tillerson sat down for talks with Lavrov on Wednesday, a volley of statements, including from a senior Russian official, appeared timed to maximize the awkwardness during the first visit to Moscow by a member of Trump’s cabinet.

Lavrov doubled down on Russia’s support for Syrian President Bashar al-Assad, repeating denials that Assad’s government was to blame for the gas attack last week and adding a new theory that the attack may have been faked by Assad’s enemies.

Tillerson reiterated the U.S. position that Assad must eventually relinquish power in Syria.

“We discussed our view that Russia as their closest ally in the conflict perhaps has the best means of helping Assad recognize this reality,” he said.

Asked whether Assad could be subject to war-crimes charges, Tillerson said that people were working to make such a case, though he cautioned that doing so would require clearing a high legal hurdle.

One of Lavrov’s deputies was even more undiplomatic.

But Lavrov said that some progress had been made on Syria at the meeting and that a working group would be set up to examine the poor state of U.S.-Russia ties. He also said that Putin had agreed to reactivate a U.S.-Russian air-safety agreement over Syria that Moscow suspended after the U.S. missile strikes.

Tillerson noted the low level of trust between the two countries. “The world’s two foremost nuclear powers cannot have this kind of relationship,” he said.

Moscow’s hostility to Trump-administration figures is a sharp change from last year, when Putin hailed Trump as a strong figure and Russian state media was often full of effusive praise for him.

In another possible setback to a thaw with Moscow, Trump said on Wednesday that NATO is not obsolete, as he had declared during the election campaign last year. But he told a news conference at the White House with NATO Secretary General Jens Stoltenberg that alliance members still need to pay their fair share for the European security umbrella.

Trump said U.S. relations with Russia were not going well.

“Right now, we’re not getting along with Russia at all. We may be at an all-time low in terms of a relationship with Russia. This has built for a long period of time. But we’re going to see what happens,” Trump told the news conference.

In an interview with The Wall Street Journal, Trump said his administration’s policy was not to demand Assad step down as part of a “peaceful resolution to the conflict,” in some contrast to Tillerson’s remarks in Moscow.

“Are we insisting on it? No. But I do think it’s going to happen at a certain point,” Trump said.

The Wall Street Journal cited Trump as saying that Assad’s use of chemical weapons again would elicit another military response, but he also said he would not intervene in depth in the conflict.

The White House has accused Moscow of trying to cover up Assad’s use of chemical weapons after the attack on a rebel-held Syrian town last week killed 87 people.

Trump responded to the gas attack by firing 59 cruise missiles at a Syrian air base on Friday. Washington warned Moscow, and Russian troops at the base were not hit.

Moscow has stood by Assad, saying the poison gas belonged to rebels, an explanation Washington dismisses as beyond credible.

Russia blocked a Western effort at the U.N. Security Council on Wednesday to condemn the gas attack and push Assad to cooperate with international inquiries into the incident.

Trump came to the presidency promising greater cooperation with Russia in fighting against the two countries’ common enemy in Syria, the Islamic State terror group. Tillerson is a former oil executive who was awarded Russia’s Order of Friendship by Putin.

Trump’s relations with Russia are also a domestic issue, as U.S. intelligence agencies have accused Moscow of using computer hacking to intervene in the U.S. presidential election to help Trump win. The Federal Bureau of Investigation is investigating whether any Trump campaign figures colluded with Moscow, which the White House denies.