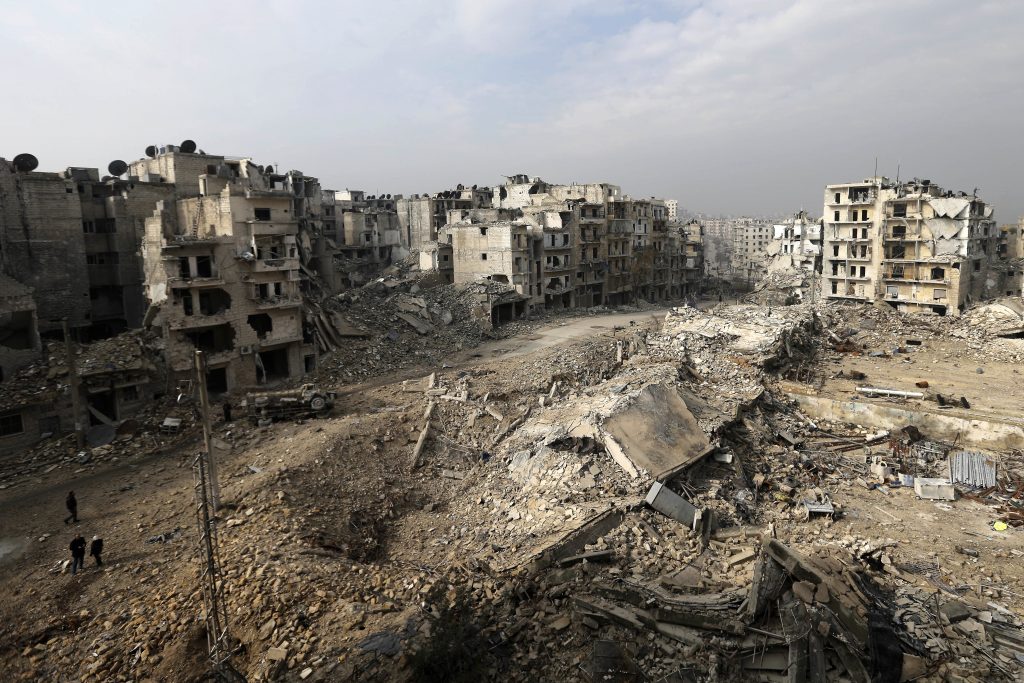 Residents of the Syrian town devastated by a chemical weapons attack last week said warplanes had returned to bomb them Saturday, despite a U.S. missile barrage and warnings of possible further response.

At least 86 people in the northwestern town of Khan Sheikhoun were killed Tuesday in a chemical attack that left hundreds choking, gripped by spasms or foaming at the mouth. Eyewitnesses and a monitoring group, the Syrian Observatory for Human Rights, said Saturday that fresh attacks on the area – now a virtual ghost town – had killed one woman and wounded several other people.

Photographs from the site showed a pair of green slippers, abandoned near a blood-spattered doorway.

Residents cowered in bedrooms and basements throughout Saturday, underscoring the apparently unchanged threat they faced from the Syrian government’s arsenal of rockets, barrel bombs and other weapons that have resulted in a majority of the conflict’s half-million dead.

In retaliation for Tuesday’s chemical assault, President Donald Trump ordered a missile strike on a Syrian air base housing a jet fleet responsible for extensive bombing across northern Syria.

The barrage of 59 Tomahawk cruise missiles fired from two U.S. ships is the first direct military action the United States has taken against the government of Syrian President Bashar Assad in the six-year-long conflict. Although Trump warned of possible further intervention, the Pentagon has said no other strikes against government targets are in current plans.

American officials had predicted that the missile strike would result in a major shift in Assad’s calculus, but the U.S. attack appeared to be symbolic in reality. Within 24 hours of the strike, monitoring groups reported that warplanes were again taking off from the bombed Shayrat air base, this time to attack Islamic State positions.

There were also reports of Syrian government and Russian airstrikes across the provinces of Damascus, Aleppo, Idlib and Daraa, all killing civilians. However, there were no reports of further use of chemical weapons.

“The American strikes did nothing for us. They can still commit massacres at any time,” said Majed Khattab, speaking by phone from Khan Sheikhoun. “No one here can sleep properly; people are really afraid.”

“If this intervention is limited only to an air base, if it does not continue, and if we don’t remove the regime from heading Syria, then this would remain a cosmetic intervention,” he said.

A longtime backer of Syria’s armed opposition, Turkey is now overseeing a stuttering peace process in the Kazakh capital, Astana, that it hopes will hasten an end to the war.

Elsewhere in the region, a leading Iraqi Shiite cleric and militia leader, Moqtada al-Sadr, called on Assad to step down and “save Syria before it’s too late.”

“President Bashar al-Assad should resign and leave power, for the love of Syria, allowing the dear people of Syria to avoid war and the scourge of terrorism,” he said.

Although some of Iraq’s Shiite militias that are more directly linked to Iran have fought in support of Assad in Syria, Sadr’s Peace Brigades have not, and the cleric promotes himself as a nationalist.

In a statement, he also criticized U.S. and Russian intervention in the country. “I call for a military retreat from Syria by everyone,” he said. “They [Syrians] are the only ones who have the right to decide their fate.”

In a sign of the continuing diplomatic fallout from the chemical attack and the U.S. response, British Foreign Secretary Boris Johnson announced Saturday that he had canceled a planned visit to Moscow.

Johnson was to fly to Moscow on Monday to meet his Russian counterpart, Sergei Lavrov, in what would have been the first such meeting since 2012. But Johnson said in a statement that “developments in Syria have changed the situation fundamentally.”

“We deplore Russia’s continued defense of the Assad regime even after the chemical weapons attack on innocent civilians,” Johnson said.

Britain has been supportive of the U.S. airstrike against a Syrian air base but has said it has no plans to join the United States in any future attacks.

Meanwhile, Russia and Iran, Assad’s most influential supporters, have rallied around him.

Russia condemned the U.S. missile strike and suspended an agreement that would minimize the risk of in-flight incidents between Russian and U.S. military aircraft over Syria.

And on Saturday, Iranian President Hassan Rouhani, in a statement carried by state media, called for the formation of an international fact-finding committee that “must not be headed by Americans.”

The Organization for the Prohibition of Chemical Weapons, a global watchdog, said Thursday that it had initiated contact with the Syrian government and was investigating the attack on Khan Sheikhoun.