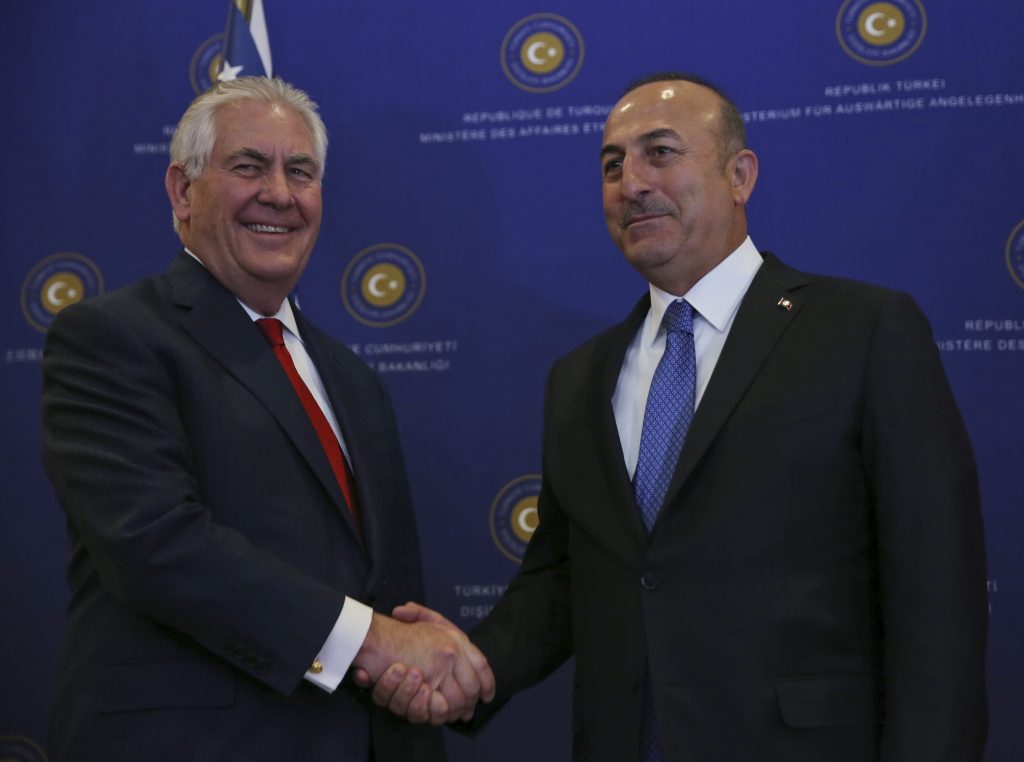 But flashes of tension during the visit left doubts about whether Tillerson had succeeded and raised new questions about the future of the U.S. relationship with the NATO ally and partner in the broader fight against the Islamic State terrorist group.

Even before Tillerson landed, Turkish officials this week leaked a damaging rumor about the U.S. Consulate in Istanbul to the local press that seemed timed to put pressure on the secretary’s visit. And at a joint news conference on Thursday with Mevlut Cavusoglu, Turkey’s foreign minister, Tillerson listened as his counterpart recited a litany of Turkish complaints, including annoyance with an American plan to support Kurdish fighters in Syria. Turkey says the fighters are part of a terrorist organization.

Tillerson said his discussions in Turkey, which included a two-hour meeting with Erdogan, had been “frank.”

“These are not easy decisions,” he said, referring to the debates with Turkey over the battle plans for Syria. “They are difficult choices that need to be made.”

Erdogan has pinned lofty hopes on his relationship with President Trump, betting that the new president would be a more sympathetic partner than his predecessor. Turkey’s frustrations with President Barack Obama had stemmed from anger at a U.S. plan to support a Kurdish-Arab force in Syria for an assault on Raqqa, the de facto capital of the Islamic State terrorists. Turkey is concerned that the plan could strengthen Syrian Kurdish fighters it regards as an extension of the Kurdistan Workers’ Party, an outlawed Kurdish separatist group in Turkey.

Another sore spot is Washington’s failure to extradite Fethullah Gulen, a Turkish cleric living in exile in Pennsylvania. Turkey has accused Gulen of spearheading a failed coup against Erdogan’s government last summer. American officials have said the evidence provided by Turkey so far is insufficient to make a legal case for extradition.

But Mr. Trump, who spoke in glowing terms about Erdogan during the U.S. presidential campaign, has shown no sign of deviating from Obama-era policies that had so angered Turkey, including a reliance on the Syrian Kurdish force, known as the YPG. In the months since Trump took office, the United States and Turkey have managed to avoid any open confrontation over their differences, with Turkish officials repeatedly showing optimism that the relationship could only improve.

Something may have changed this week, however.

On Wednesday, Turkish media reported that the U.S. Consulate in Istanbul had telephoned one of the top suspects in last summer’s failed military coup – an incendiary allegation ahead of Tillerson’s visit. The U.S. Embassy in Ankara quickly issued a statement confirming the phone call, on July 21. But the embassy said the call was “far from suspicious,” saying it was made to inform the suspect, Adil Oksuz, that his U.S. visa had been revoked at the behest of Turkish authorities.

Turkish authorities say Oksuz, a theology professor from Ankara, was a top aide to Gulen. Prosecutors believe Oksuz was at large, facilitated meetings between renegade generals in Ankara ahead of the July 15 coup attempt, according to Turkish media reports.

The U.S. Embassy’s explanation for the call did little to quiet the controversy. Turkish Prime Minister Binali Yildirim responded that the government was waiting “for a more satisfying answer,” from the United States.

At the news conference Thursday, Cavusoglu also cast doubt on the embassy’s account, saying “We want to see the details in concrete terms.”

The Turkish president and his supporters are seen as especially volatile partners these days, as they fight for votes at home in advance of a referendum in April that could give Erdogan broad new powers and extend his term in office. The referendum has already sparked bitter fights between Turkey and several European allies, including Germany and the Netherlands. American officials said Tillerson was well aware of that context before he traveled to Ankara.

Tillerson made no public comment on the Turkish government’s broad purge of state institutions after the failed coup last summer, or the ongoing crackdown by the authorities on civil society activists, journalists and academics. Tillerson also did not meet with any of Erdogan’s political opponents, because there was no time in his schedule, U.S. officials said.