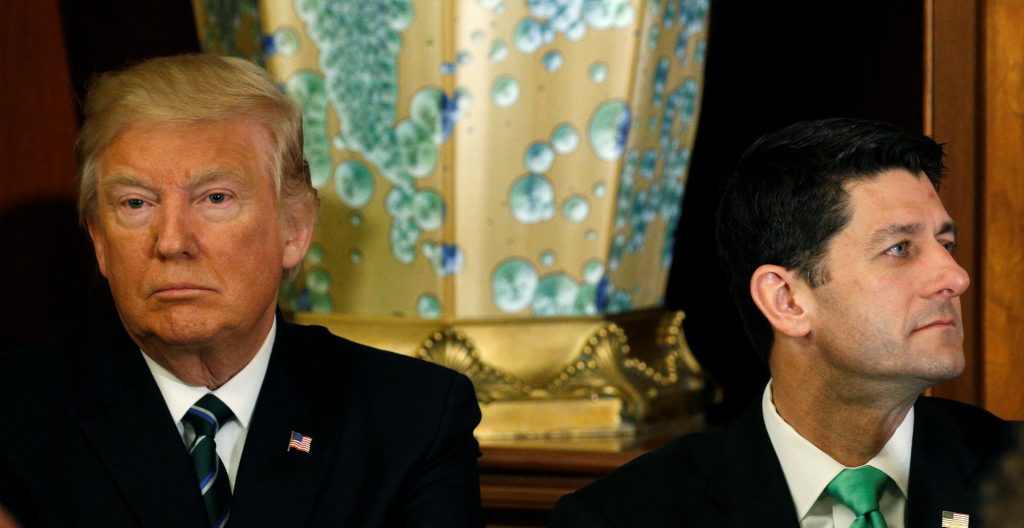 President Donald Trump and House Speaker Paul Ryan both want to rewrite the tax code, but their proposals differ on how much tax relief to give the middle class.

Pres. Trump wants a tax cut across the board, according to the plan he published during the campaign. He has proposed relief for the wealthy especially, but also for less affluent households. The plan that Speaker Ryan, R-Wis., and his colleagues in the House have put forward would not substantially reduce taxes for the middle class, and many households would pay more.

Pres. Trump’s plan arguably reflects his unique style of conservative populism. The proposal would be extremely costly for the government, and the president’s past comments suggest he would be willing to put the federal government deeper into debt to fund breaks for the middle class.

Ryan’s plan would instead simplify and streamline the tax code in accordance with conservative orthodoxy, eliminating the goodies for households with modest incomes that Trump would preserve or expand.

In all, taxpayers with roughly average incomes could expect a tax cut of around $1,100 a year under Trump’s plan, compared to just $60 under Ryan’s plan once the proposals were fully implemented.

Now, after even a united Trump-Ryan effort on health care failed to win over enough Republicans to get through the house, their hopes of passing a tax plan depend on getting on the same page quickly.

During the campaign, Trump proposed a plan that would have reduced taxes drastically, especially for the wealthy but also for the poor and working class. Meanwhile, Rep. Paul Ryan, R-Wis., and his colleagues in the House put together a plan that was equally generous to the rich, but that would give poor and middle-class taxpayers less of a break. The speaker’s plan would even have increased taxes on some in the upper middle class.

The two tax plans have important features in common. In terms of taxes on the rich, both plans would reduce the marginal rate paid by the wealthiest taxpayers on individual income from 39.6 percent to 33 percent.

And among those in the poorest fifth of households, the typical taxpayer would save about $100 under Ryan’s plan and about $120 under Trump’s.

The two plans would repeal some of the taxes that Obamacare imposed on the rich, and both plans also repeal the estate tax, which rich families pay when one of their members dies. Repealing the tax would return $300 billion or so to those families over a decade, according to the center, depending on the details of the plan.

Meanwhile, both plans would increase the amount that many families can earn without paying taxes — to $30,000 for a married couple in Trump’s plan and $24,000 in the proposal from Republicans in the House. These provisions would help poor and working-class families, although large families or households with one parent could be worse off under the simplified systems Republicans have proposed.

Trump’s plan also includes a number of other benefits for families. Parents would be allowed to deduct child-care expenses from their income, and they could save money for taking care of children in special accounts to avoid taxes. Trump would also expand the Earned Income Tax Credit, a bonus that the government pays low-wage workers on their earnings, to help parents.

Ryan’s plan, by contrast, would prevent taxpayers from making deductions from their income — except for the money they pay in interest on their homes and any donations they give. Some taxpayers would have to pay more without the ability to reduce their income by deducting, for example, the amount they pay in state and local taxes.

Another reason for the discrepancy in the effects of the plans on the middle class is how Ryan’s proposal would affect imports and exports. The plan includes a complex and controversial provision known as a “border adjustment,” which some economists think would increase prices for goods and services imported from overseas.

Eric Toder, an economist at the Tax Policy Center, said the group’s initial analysis of this aspect of the plan treated it as a kind of tax on households’ purchases, but many experts believe that Ryan’s proposal would not have that effect over the long term.

In Trump’s plan, these deductions are limited to $200,000 for a married couple, which would allow all but the richest taxpayers to continue exploiting them.

Affluent but not rich households would pay more under the proposal from Ryan and his colleagues. For example, those making between $150,000 and $220,000 a year would each pay an average of $1,900 more in taxes. Households in this group would pay about $3,400 less if Trump gets his way.

The richest 0.1 percent of households would receive similar benefits from both politicians: an average of $1.4 million per household a year under Ryan’s plan, and $1.5 million annually under Trump’s plan.