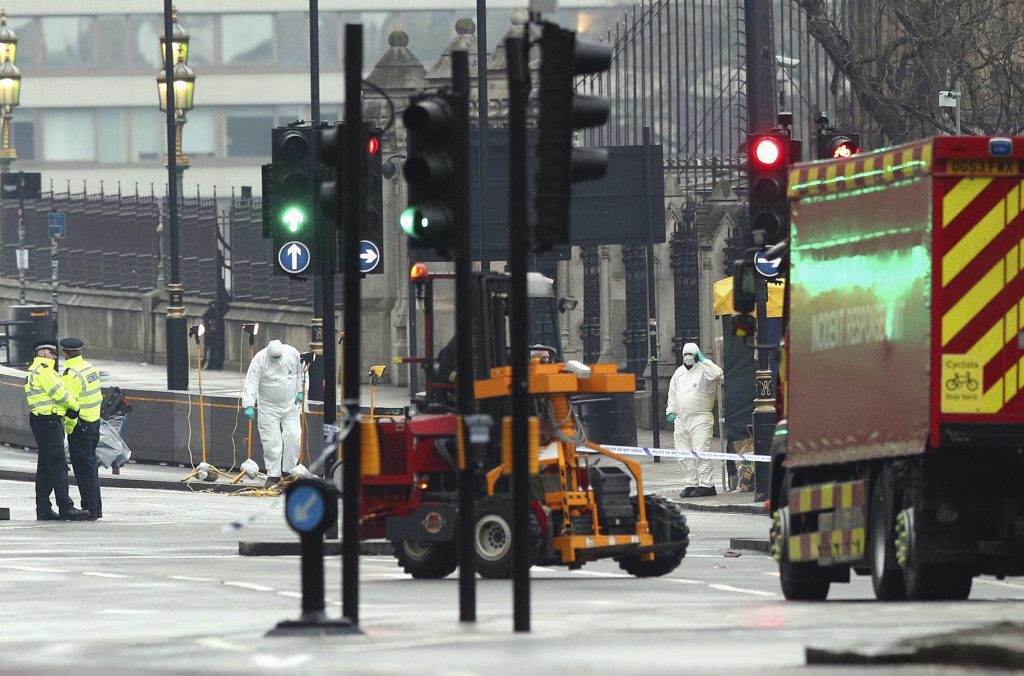 Police arrested eight people at six locations in London and Birmingham as part of the investigation into a lone-wolf terrorist who killed three people and injured 40 before being shot dead by police near Parliament in London, Britain’s most senior counterterrorism officer said on Thursday.

Mark Rowley said there were three people killed and 29 people still being treated in the hospital, seven of whom were in critical condition. Late Wednesday night, the police had said that four people were killed, but on Monday they revised the number to three.

This was the worst such attack in Britain since 2005.

The terrorist sped across Westminster Bridge in a car, plowing into pedestrians along the way, then ran through the gates of the nearby Parliament building and stabbed a policeman before being shot dead.

Authorities have said they are working on the assumption that the attack was Islamist-related.

Britons have been shocked by the fact that the terrorist was able to cause such mayhem in the heart of the capital equipped with nothing more sophisticated than a hired car and a knife.

“The police and agencies that we rely on for our security have forestalled a large number of these attacks in recent years, over a dozen last year,” said Defense Minister Michael Fallon.

“This kind of attack, this lone-wolf attack, using things from daily life, a vehicle, a knife, are much more difficult to forestall,” he told the BBC.

A minute’s silence was held in Parliament and in front of police headquarters at New Scotland Yard at 9:33 a.m. local time, in honor of the victims – 933 was the shoulder number on the uniform of Keith Palmer, the policeman who was stabbed to death.

Police believe they know the identity of the terrorist but have not named him.

“We’re dealing with an enemy, a terrorist enemy, that is not making demands or taking people hostage, but simply wants to kill as many people as possible. This is a new element to international terrorism,” Fallon said.

Rowley said police had searched six addresses in London, Birmingham, and other parts of the country in their investigation.

“It is still our belief … that this attacker acted alone and was inspired by international terrorism. At this stage we have no specific information about further threats to the public,” Rowley said.

He said there was a mix of nationalities among the dead but gave no details. The victims were the policeman, Palmer, and two members of the public, a woman in her mid-40s and a man in his mid-50s.

Three French high-school students aged 15 or 16, who were on a school trip to London with fellow students from Brittany, were among the injured.

Fallon said security arrangements at Parliament would be reviewed.

A meeting of COBR, the government’s crisis response committee, was due to take place later on Thursday morning.

Westminster Bridge remained cordoned off with a strong police presence. The nearby Westminster underground rail station, normally a busy hub in the morning rush hour, was not accessible from the street as it was within the cordon.

Prime Minister Theresa May said on Wednesday the location of the attack was not an accident. She said any assault on British values of liberty, democracy and freedom of speech was doomed to failure and Britons would not be divided by such acts.

But anti-immigration groups were quick to make links between immigration and the attack.

Leave.EU, a group that has campaigned for immigration to be severely restrained as part of Britain’s exit from the European Union, accused mainstream politicians of facilitating acts of terror by failing to secure borders.

“We are sick, tired, but perhaps even more so we are angry that recent governments across Europe have enabled these attacks through grossly negligible policies that have left us vulnerable,” the group said in a statement.