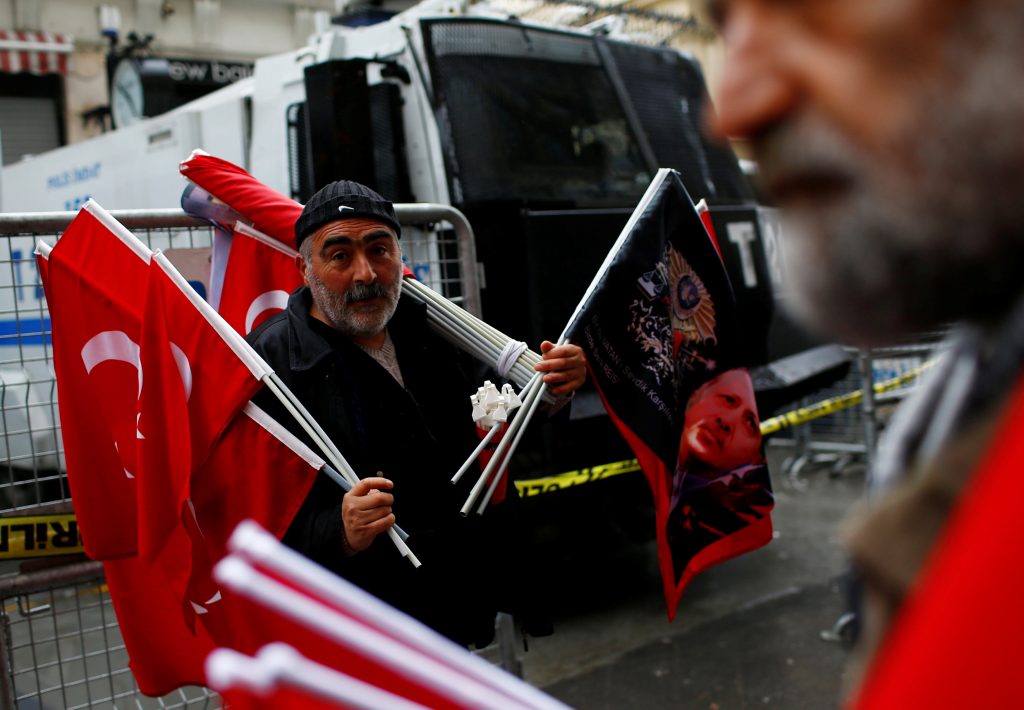 Turkey said on Monday it would suspend high-level diplomatic relations with the Netherlands after Dutch authorities prevented its ministers from speaking at rallies of expatriate Turks, deepening the row between the two NATO allies.

The sanctions — which include a ban on the Dutch ambassador and diplomatic flights from the Netherlands but do not appear to include economic measures or travel restrictions for ordinary citizens — mark another low point in relations between Turkey and the European Union, which it still officially aims to join.

President Tayyip Erdogan, who is seeking Turkish voters’ support in an April 16 referendum on boosting his powers as head of state, has previously accused the Dutch government of acting like “Nazi remnants” for barring his ministers from addressing expatriate Turks to drum up votes.

The row is likely to further dim Ankara’s prospects of EU membership. It also comes as Turkey wrestles with security concerns over terrorist attacks and the war in neighboring Syria.

“We are doing exactly what they did to us. We are not allowing planes carrying Dutch diplomats or envoys from landing in Turkey or using our airspace,” Deputy Prime Minister Numan Kurtulmus told a news conference after a cabinet meeting. “Those creating this crisis are responsible for fixing it.”

Kurtulmus, the government’s chief spokesman, also threatened to scrap Turkey’s deal to stop the flow of migrants into Europe, saying the agreement may need to be re-evaluated. He said high-level government meetings would be suspended between the two countries until the Netherlands had atoned for its actions.

Earlier, Erdogan threatened to take the Dutch to the European Court of Human Rights.

Turkey also summoned the Dutch charge d’affaires on Monday to complain about the ban — imposed due to fears of unrest and also to Dutch distaste at what Europe sees as an increasingly authoritarian tone from Erdogan — and the actions of police against Turkish protesters in Rotterdam over the weekend, Foreign Ministry sources said.

On Sunday, Dutch police used dogs and water cannon to disperse hundreds of protesters waving Turkish flags outside the consulate in Rotterdam. Some protesters threw bottles and stones and several demonstrators were beaten by police with batons, a Reuters witness said. Mounted police officers charged the crowd.

“The Turkish community and our citizens were subject to bad treatment, with inhumane and humiliating methods used in disproportionate intervention against people exercising their right to peaceful assembly,” a statement attributed to ministry sources said.

The Dutch government barred Turkish Foreign Minister Mevlut Cavusoglu from flying to Rotterdam on Saturday and later stopped Family Minister Fatma Betul Sayan Kaya from entering the Turkish consulate there, before escorting her back to Germany.

Protests then erupted in Turkey and the Netherlands.

Several European countries have stopped Turkish politicians holding rallies, due to fears that tensions in Turkey might spill over into their expatriate communities.

Some 400,000 Turkish citizens live in the Netherlands and an estimated 1.5 million Turkish voters live in Germany.

On Monday evening, Austrian Chancellor Christian Kern said he would try to prohibit Turkish ministers from campaigning in his country too for “reasons of public security”.

The Dutch government said the visits were untimely ahead of a national election on Wednesday, in which polls suggest it may lose about half its seats due to expected big gains by the anti-Islam party of Geert Wilders.

Monday was the third time the Dutch envoy had been called in since Saturday over the row. The Dutch ambassador is on leave and the Turkish Foreign Ministry says it does not want him back “for some time”.

The European Union’s executive arm said on Monday that the bloc would assess Turkey’s planned constitutional changes in light of the country’s status as a candidate for EU membership, and called on Ankara to refrain from statements and actions that could further fuel the diplomatic row.

Dutch direct investment in Turkey amounts to $22 billion, making the Netherlands the biggest source of foreign investment with a share of 16 percent.

Ozgur Altug, chief economist at BGC Partners in Istanbul, said at this stage he did not foresee the row having serious short-term economic consequences.

“However, if the tension escalates and if countries start imposing sanctions against each other, it might have serious implications for the Turkish economy,” he said.

Turkish exports to the Netherlands totalled $3.6 billion in 2016, making it the 10th largest market for Turkish goods, according to the Turkish Statistical Institute. Turkey imported $3 billion worth of Dutch goods in 2016.

Dutch visitors are important to Turkey’s tourism industry, which was hit hard in 2016 by security fears due to attacks by Islamic State and Kurdish militants. Some 900,000 Dutch people visited Turkey last year, down from 1.2 million a year earlier.

Ankara is seeking an official written apology for the treatment of its family minister and diplomats in Rotterdam, Turkish Foreign Ministry sources also said.

Dutch Prime Minister Mark Rutte has said it is Erdogan who should apologize for comparing the Netherlands to fascists and Nazis, adding that Turkey was acting “in a totally unacceptable, irresponsible manner”.

NATO Secretary-General Jens Stoltenberg called on Turkey and the Netherlands to defuse the row.

Over the weekend, Erdogan dubbed the Netherlands “Nazi remnants” and said “Nazism is still widespread in the West,” comments echoed in Turkish media on Monday.

“Nazi Dogs,” said a front-page headline, incorporating a swastika in the pro-government Aksam newspaper, above a photo of a police dog biting the thigh of a man during Saturday night’s protest in Rotterdam.