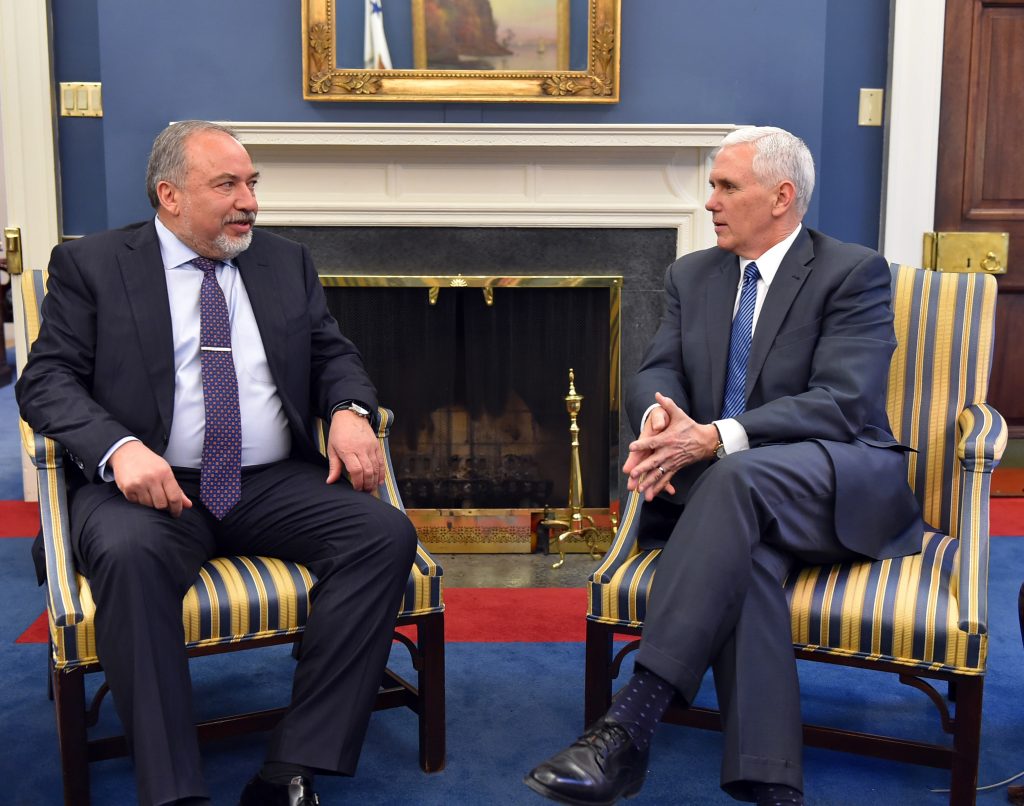 Defense Minister Avigdor Liberman met Tuesday night with U.S. Vice President Mike Pence, as he continued his diplomatic tour of Washington. The two discussed regional issues, the peace process, Iran, and anti-Semitism in the United States. Mr. Liberman praised Mr. Pence and the current administration, saying that Israel “has true friends in the White House.” In a statement, the White House said that Mr. Pence “underscored the unbreakable bond between the United States and Israel and reaffirmed the United States’ commitment to upholding Israel’s qualitative military edge.”

Mr. Liberman also praised the administration for its commitment to moving the U.S. embassy in Israel from Tel Aviv to Yerushalayim. Mr. Liberman said that Israel was “waiting” for this to happen, and Israelis were very excited at the prospect. In recent days, Israel Radio reported, residents of Yerushalayim have reported seeing delegations of what appear to be American diplomatic personnel checking out real estate in the Mamilla and Rechavia neighborhoods, possibly searching for locations for the embassy and/or the residence of prospective Ambassador David Friedman. The U.S. embassy in Tel Aviv had no comment on the matter.

Mr. Liberman also praised the administration for its stance on Iran. “We cannot rely on any agreements with Tehran,” Mr. Liberman said. “They keep reiterating their desire to wipe Israel off the map, and they are constantly working to spread terror around the world, and to disrupt order and stability in the Middle East. Israel is happy to see that U.S. President Donald Trump understands the great danger of the Ayatollah, and Israel’s need to fight them effectively,” he said.

Last month, Mr. Pence helped clear away the damage at a Jewish cemetery in St. Louis that had been desecrated, and Mr. Liberman said that this was another sign of the positive sentiments of the administration to the Jewish people. By his act, Mr. Liberman said, Mr. Pence showed that the U.S. has “zero tolerance” for anti-Semitism, and that the “government know Jews are an important and integral part of the American nation.”

Earlier Tuesday, Mr. Pence met with U.S. Secretary of Defense James Mattis. According to Channel Ten, Mr. Liberman told Mr. Mattis that Israel needs “an active America in our region.” After the meeting, he commented that “strategic cooperation between Israel and the U.S. is vital and critical to not only Israel’s security, but also the security and stability of the entire Middle East.”

Mr. Liberman is set to meet Wednesday with U.S. Secretary of State Rex Tillerson. Before his departure from Israel Monday, Mr. Liberman said that he had received “clear messages” from the United States that any attempts by Israel to annex all of Yehudah and Shomron would set off an immediate “crisis” with the U.S. “I am getting phone calls from all over the world asking me to clarify the government’s position on this,” Mr. Liberman told MKs at the Knesset Foreign Affairs and Defense Committee. “The coalition must make it as clear as possible that it does not intend to impose Israeli sovereignty on Yehudah and Shomron.”

“As far as I am concerned, we should be separating from the Palestinians, not annexing them,” Mr. Liberman said. “Annexing Yehudah and Shomron will add 2.7 million Arabs to Israel. Regardless of what this means for international relations, under Israeli law they will receive at least the status of resident, and they will all be eligible for National Insurance payments – alone a NIS 20 billion expense – as well as unemployment, welfare and more, not to mention the money that will have to be provided for housing, infrastructure and other services.”