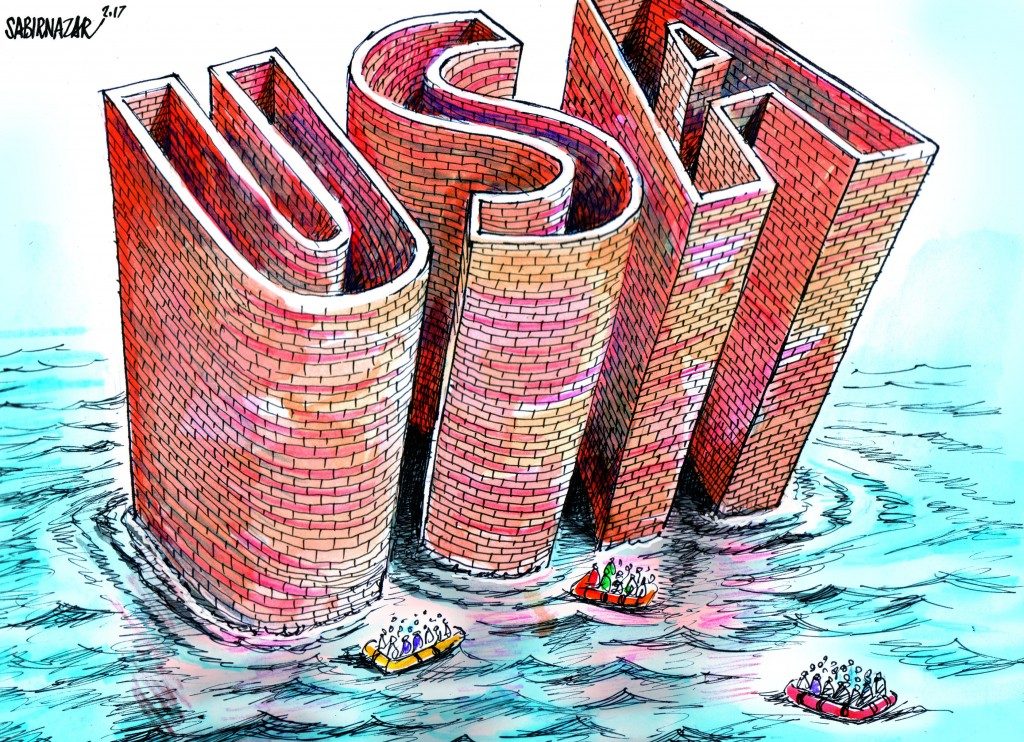 My wife and I don’t employ an undocumented housekeeper — or a documented one, for that matter. But we recently met someone in the former category. “Leah” greeted my wife and me as we arrived at the home of some friends who had invited us for a Shabbos seudah. Our hosts had not yet returned from the shul where they daven, and so I retired to the living room, and my wife went to the kitchen and spoke a bit with Leah, who had immigrated from south of the border.

It turns out that Leah loves working for our friends, and considers them among the nicest people she’s ever met. We weren’t surprised. We have good taste in friends.

It turns out, too, that she lives in fear of deportation, now that the administration is engaged in a crackdown on “illegal immigrants.” On February 6, Immigration and Customs Enforcement (ICE) agents began carrying out “fugitive enforcement operations.”

According to the Department of Homeland Security, more than 680 people were arrested in five cities that week.

It wouldn’t seem, though, at least at first glance, that Leah really has much to fear. The crackdown is aimed at criminal elements, and she, other than having immigrated unlawfully, is a law-abiding person. In the words of President Trump’s recent tweet, “Gang members, drug dealers & others are being removed!” Not housekeepers. Or gardeners, like the ones the president referred to in 2013 when, according to someone present, he told a group of young people born to undocumented workers: “You know, the truth is I have a lot of illegals working for me in Miami … my golf course is tended by all these Hispanics — if it wasn’t for them my lawn wouldn’t be the lawn it is; it’s the best lawn.”

In fact, going after undocumented criminals was precisely the policy of the previous administration, which deported no less than 409,849 people in 2012. In 2015, ICE, in “Operation Cross Check,” arrested more than 2,000 undocumented immigrants with criminal records in one week. And even when the Obama administration shifted its enforcement priorities so that the vast majority of the estimated 12 million undocumented immigrants would not be subject to immediate deportation, it still went after convicted criminals, terrorism threats and recent immigrants with gusto.

So what, if anything, has changed?

Well, the language, for starters. Mr. Trump called the crackdown “a military operation,” though that description was walked back by White House press secretary Sean Spicer, who explained that the president had been speaking descriptively, not literally.

But there is, in fact, a larger pool now of potential deportees, more people deemed enforcement “priorities.” An undocumented immigrant needn’t have been convicted of a crime to be deported. He or she can simply be charged with a crime, or deemed to have committed an act that an immigration agent considers, on his own, a deportable offense. What’s more, for the first time, ICE policy now allows the arrest of undocumented immigrants who have only immigration violations on their record, if they happen to be discovered in the course of law enforcement actions.

That, it seems, is what Leah was frightened of. While stories of ICE personnel conducting random “raids” in various public places, and their supposed plans to arrest people on their way to worship have been decisively debunked, she had heard of undocumented people with traffic misdemeanors being arrested.

Leah might take heart in the president’s apparent shift on DACA, former President Obama’s Deferred Action for Childhood Arrivals program, which allows “dreamers,” people who illegally immigrated as children, to remain in the U.S. and work.

On the campaign trail, Mr. Trump vowed to “immediately terminate” the program. But — deeply angering some of his more anti-immigrant supporters — he has since softened his tone, calling most of the roughly 840,000 immigrants “incredible kids” and the topic of their status “one of the most difficult subjects I have.”

And while he weighs the issue of “dreamers,” and lawmakers of both parties in Congress are trying to devise legislation to carve out a special status for them, the administration is still issuing work permits to undocumented people under the DACA program.

That is an encouraging sign, at least to those of us who feel concern for young people brought over to the U.S. as children, and for all immigrants like Leah, who are only seeking better lives for themselves and their families. We Jews, both inherently and in light of our own recent history, should have a special appreciation of their hopes to one day become full-fledged American citizens.