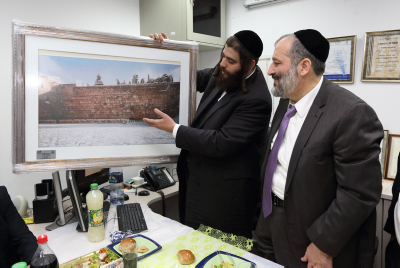 The chareidi city of Elad is about to get a lot bigger. On a tour of the city, Interior Minister Rabbi Aryeh Deri said that he was working to clear annexation of a 4,000-dunam tract of land next to the city that will allow for the construction of thousands of new homes. Rabbi Deri toured the area and declared that the new tract was appropriate for construction work.

The tract currently belongs to the IDF and is used for military exercises. The army recently decided to free up the area and hand it back over to the state. The government has already considered what to do with the tract, and at Rabbi Deri’s prompting, the appropriate committees decided to allocate it to Elad, he said.

Housing for the chareidi community is always a sensitive issue, as the government seeks to develop new locations – not always successfully, as chareidi home-buyers do not always like the areas and projects promoted by the government. The great advantage of expanding Elad, said Rabbi Deri, is that “all the educational institutions and other services are already in place. We can immediately start building and double or even triple the size of Elad. All that remains is to officially annex the tract to Elad,” he said.

City officials and residents welcomed the news. Deputy Mayor Tzuriel Krispal said that the annexation of the tract was a fulfillment of the vision of the city’s planners. “An additional 13,000 homes were planned for this tract, but construction was delayed because the army remained on the site. Minister Rabbi Deri was the one who years ago envisioned and promoted Elad and set its municipal boundaries, and now he is extending them.”