Investors were focused on an evening speech by President Donald Trump to Congress in hopes of gleaning more details on the timing of tax cuts and other policies.

“The next direction of this market, in our view, is going to be very much driven by the ability of the administration to start putting into action some of the things that the market has gotten excited about, mainly tax reform more than anything else,” said Rob Eschweiler, global investment specialist at J.P. Morgan Private Bank. 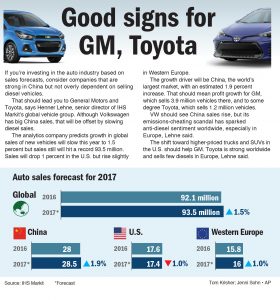 Trump was scheduled to deliver his first speech to a joint session of Congress Tuesday evening. On Monday the president told a group of governors that his budget would propose increasing defense spending by $54 billion while cutting domestic programs and foreign aid by the same amount. He also said “We’re going to start spending on infrastructure big.”

Since the election in November, expectations of tax reform, deregulation and ramped-up spending on defense and infrastructure projects have pushed the stock market higher. Investors are looking for more clarity on business-friendly policies, but also on trade, immigration and other Trump administration policy initiatives that have made some investors nervous.

“[The market] has priced in all the positive aspects of some of his campaign promises, but what it hasn’t done is price in the negatives that could result from health care, trade policies, border taxes, things like that which are a little bit less clear,” said Lindsey Bell, investment strategist at CFRA Research.

Traders weren’t entirely focused on Washington on Tuesday. They continued to size up the latest company earnings and outlooks.

Perrigo slumped 11.7 percent after investors reacted to several disclosures by the Irish drugmaker, including disappointing guidance for 2017 and the company’s decision to sell its royalty rights to a multiple sclerosis drug for as much as $2.85 billion. Perrigo said the sale will hurt its earnings, but noted it plans to use the proceeds to pay down some of its debts. The stock slid $9.91 to $74.77.

Signet Jewelers was the biggest decliner in the S&P 500 following a report of widespread discrimination at a subsidiary. The Washington Post first reported the allegations Monday, based on newly released class-action arbitration filings. The stock tumbled $9.29, or 12.7 percent, to $63.59.

Investors also weighed new data on the economy. The Commerce Department said that the U.S. economy grew at a 1.9 percent rate in the last three months of 2016, unchanged from an initial estimate. The increase in the gross domestic product, the broadest measure of economic health, represented a significant slowdown from 3.5 percent growth recorded in the third quarter.