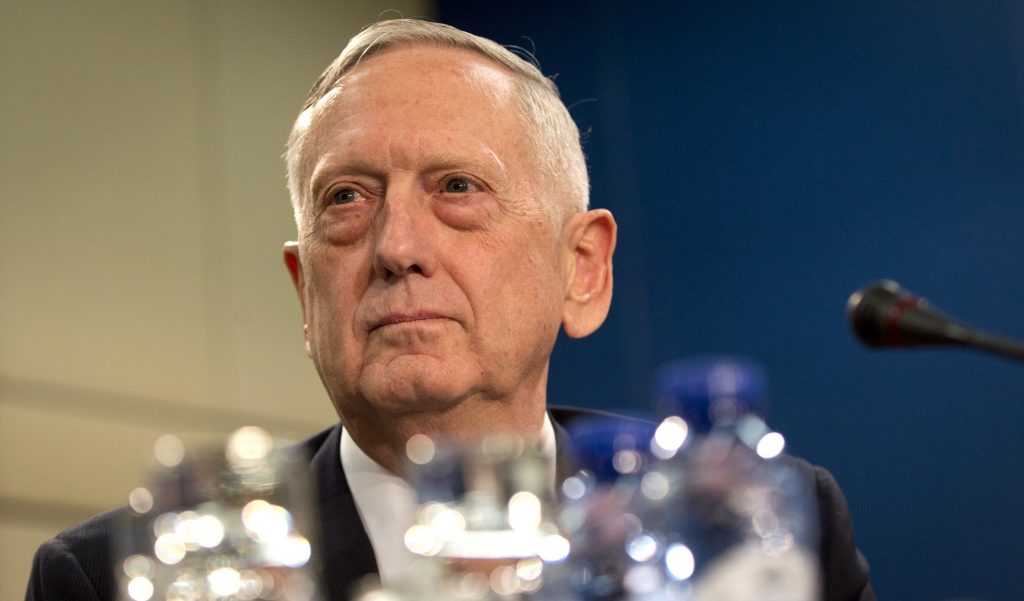 Navy Capt. Jeff Davis said Mattis provided the results of his 30-day strategy review ahead of a Monday afternoon cabinet-level meeting of the National Security Council. It’s unclear if the discussion will include Trump, who said last week his goal is to “obliterate” IS.

Davis said details of the report are classified secret.

“It is a plan to rapidly defeat ISIS,” Davis said, using the Pentagon’s preferred acronym for the group, which has proven resilient despite losing ground in its strongholds Syria and Iraq.

Officials familiar with the review have said it will likely lead to decisions that mean more U.S. military involvement in Syria, and possibly more ground troops, even as the current U.S. plan in Iraq appears to be working and will require fewer changes. The officials weren’t authorized to speak publicly about the document and demanded anonymity.

Davis described the Mattis report as “a framework for a broader discussion” of a strategy to be developed over time, rather than a ready-to-execute military plan. In a Jan. 28 executive order, Trump said he wanted within 30 days a “preliminary draft” of a plan to “defeat ISIS.” Davis said the report defines what it means to “defeat” the group, which he wouldn’t reveal to reporters.

It also includes some individual actions that will require decisions by the White House, Davis said, “but it’s not a ‘check-the-block, pick A or B or C’ kind of a plan.”

Beyond military options, the officials familiar with the review said the report increases emphasis on nonmilitary elements of the campaign already underway, such as efforts to squeeze IS finances, limit recruiting and counter propaganda that is credited with inspiring violence in the U.S. and Europe.

Marine Corps Gen. Joseph Dunford, chairman of the Joint Chiefs of Staff, said last week the emerging strategy will target not just Islamic State militants but also al-Qaida and other extremist organizations in the Middle East and beyond, whose goal is to attack the United States. He emphasized that it would not rest mainly on military might.

Dunford’s comment suggests Pentagon leaders may have a more nuanced view of IS than is reflected in Trump’s promise to “obliterate” the group, as he put it on Friday. Dunford said the U.S. should be careful that in solving the IS problem, it does not create others. Among sensitive questions are how to deal with Turkey, a NATO ally with much at stake in neighboring Syria, and Russia, whose year-and-a-half military intervention has propped up Syrian President Bashar Assad’s government.

Davis said Mattis’ report was built on broad concepts and based on advice from across the government.

The officials familiar with the review say the recommended approaches will echo central elements of the Obama administration’s strategy, which centered on the U.S. military supporting local forces rather than doing the fighting for them. Mattis already has signaled publicly he sees no value in having U.S. combat forces take over the ground war.

“I would just tell you that by, with and through our allies is the way this coalition is going against Daesh,” he said last week in Baghdad, using an Arabic term for IS.

Asked if adding more U.S. troops or better arming Syria’s Kurds were options, Mattis said he will “accommodate any request” from his field commanders. He said a degree of “confidentiality” was required so plans aren’t exposed to the enemy.

Army Gen. Joseph Votel, the commander of U.S. Central Command, which oversees military operations in the Mideast, has said more American troops may be needed to speed up the fight in Syria. The U.S. currently has about 500 special operations forces in Syria helping to organize, advise and assist local forces.

One of the thorniest problems the Trump administration faces concerns Russia’s military role in Syria. Although Trump has expressed interest in working with Russia against IS, the Pentagon has been reluctant to go beyond military-to-military contacts aimed at avoiding accidents in the airspace over Syria.