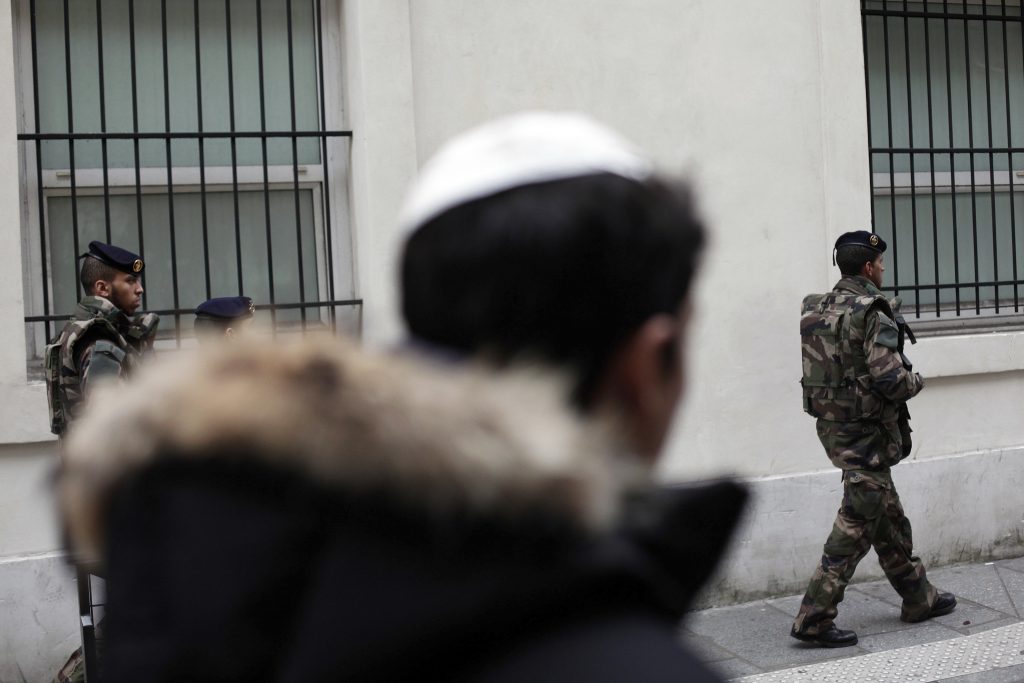 No more Muslim women in the Metro wearing the latest in headscarf attire. No more young Jewish boys in yarmulkes dashing into the bakery for the family’s dinner baguette.

Le Pen gave a real-life demonstration of her far-reaching but little-noticed proposal during a trip this week to Lebanon, refusing to don a head covering for a visit with a Muslim religious leader. She lost out on the meeting but won new publicity just as she is topping polls.

The ban would stigmatize France’s large Muslim population anew and force Europe’s largest Jewish community to give up a cherished custom.

The far-right leader’s bold plans to pull France out of the European Union and exit the euro currency have obscured some elements of the 144 “commitments” in her platform.

Tucked within the list is point 95. It calls for extending a 2004 law banning headscarves and other “ostentatious” religious symbols from the nation’s classrooms to all public spaces, including the streets. Only religious workers such as nuns, imams and rabbis would enjoy exceptions.

Le Pen, leader of the anti-immigration National Front party, holds up this measure as her contribution to French secularism, the foundational value behind the 2004 law. A ban on face-covering veils in public followed in 2010.

In both instances, it was well known that the government was also targeting Muslim fundamentalism, seen as a gateway to violent extremism — just as Le Pen appears to be doing.

Current polls suggest Le Pen could come out on top in the first-round election in April 23 but would lose in the May 7 runoff.

“I consider the headscarf a symbol of a woman’s submission,” Le Pen told reporters Tuesday at the end of her stay in Beirut, after refusing to cover her head to meet Lebanon’s grand mufti, Sheikh Abdel-Latif Derian. “I will not put on the veil.”

Enlarging the space where headscarves would be forbidden is an ongoing debate in France. But Le Pen’s plan to ban from public spaces even widely worn Muslim headscarves — and yarmulkes for Jews — may be a step too far.

“I know we are asking some of our fellow citizens (for) some sacrifices,” said Jean Messiha, a top Le Pen adviser, referring to French Jews. “But I am sure everybody will understand the utility of this sacrifice … to promote French unity and French peaceful relations in the public space.”

Le Pen has been courting Jews, trying to undo the pariah status her party gained under her father and party founder Jean-Marie Le Pen, who has been repeatedly convicted of anti-Semitism and racism. Last month, Marine Le Pen even sent a top official on a private visit to Israel where he met discreetly with a government minister.

But for the Representative Council of Jewish Institutions of France, or CRIF, Le Pen and her party remain taboo. She was the only leading presidential candidate not invited to CRIF’s annual dinner Wednesday.

“They are the defenders of xenophobia, populism, racism and, of course, anti-Semitism in French society today,” CRIF Vice-President Yonathan Arfi said.

Her proposal amounts to an attack on expressing individual identity, Arfi told The Associated Press. “It is to tell the French that with us, you will no longer see in the streets foreigners, all those you feel are disturbing your vision of French society.”

French Muslims fear their estimated 5 million-strong population could face an escalation of Islamophobia even if many don’t cover their heads.

The streets are “the most fundamental area of freedom,” said Marwan Muhammad, head of the Collective Against Islamophobia in France, which helped Muslim women mount successful legal battles last summer against bans on “burkini” swimsuits on numerous municipal beaches.

“Islamophobia doesn’t only impact Muslims. It impacts society at large because it destroys something fundamental — liberty,” he said.

Critics note there has been no mention of Christian signs in the ban proposal.

“Big crosses don’t exist. Christian religions don’t have ostentatious signs,” Le Pen said on a recent television program. “In reality it is we who invented secularism.”

France’s principle of secularism was established in 1905 to bring peace between powerful Roman Catholic clerics and the state. It is now written into the constitution.

Richard Abitbol, head of the Confederation of Jews of France and Friends of Israel, says Le Pen’s proposal is less dramatic than some think, in part because many Jews have already exchanged the yarmulke for a hat out of fear of becoming a target of anti-Semitic attacks. His group, unlike CRIF, has not put the National Front on a black list.

However, he added, “The day they forbid circumcision in France there will be no more Jews in France.”