For many people flying from Singapore to Sydney, the flight can take as little as seven hours or so. But not if you are Binyamin Netanyahu. In the Israeli prime minister’s case, it can take more than 11 hours.

As you can see in the map below, created using data from FlightAware, the Israeli leader took an unusual detour when traveling from Singapore to Australia overnight. The Guardian newspaper also confirmed this unusual route with Netanyahu’s delegation.

This detour added several hours to his journey.

Indonesia has the world’s largest Muslim population. Like other Muslim-majority nations, the country has no formal diplomatic relations with Israel because of the latter’s conflict with Palestinians. Some implications of this are well known – Israeli passport holders are refused entry to a number of Muslim-majority nations, except in special circumstances, though Israeli citizens are permitted access to Indonesia on tourist visas.

However, the strange route of Mr. Netanyahu’s plane shows another effect of Israel’s diplomatic situation. Indonesia doesn’t grant El Al access to its national airspace, necessitating a circuitous route around it. 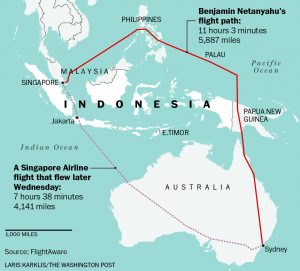 And Indonesia isn’t the only country to restrict access. A quick look at Mr. Netanyahu’s earlier flight from Tel Aviv to Singapore also shows how the Israeli prime minister took an unusual route, which may have been designed to avoid the airspace of Saudi Arabia or another nation.

Representatives of El Al didn’t respond to clarify what airspaces they were prohibited from flying over.

Mr. Netanyahu’s awkward journey around Indonesia comes at a time when the Israeli leader is hoping for a closer relationship with Jakarta. The two countries were reported to be informally upgrading their relations in 2012, with Indonesia opening a consulate in the city of Ramallah that would include a diplomat who would unofficially serve as ambassador to Israel.

However, when Mr. Netanyahu called upon Indonesia to normalize diplomatic relations last year, the Indonesian government said it would do so only when the Palestinians are granted an independent state.