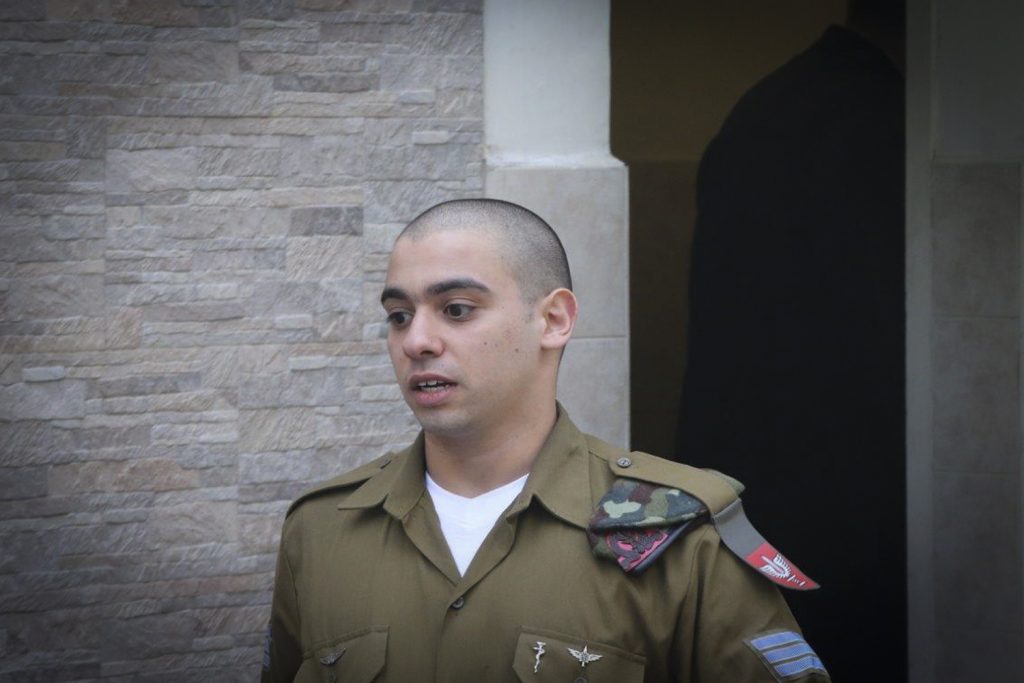 Attorneys for Elor Azaria, the IDF soldier sentenced Tuesday to 18 months in the brig for shooting a terrorist who lay on the ground last Purim, said Wednesday that they may not appeal his sentence. Speaking to Army Radio Wednesday, attorney Ilan Katz said that the decision would be made “in a rational and intelligent manner,” and part of the decision would depend on what the army decided to do regarding Azaria’s internment.

“The only thing that concerns me and my team is looking out for the welfare of Elor, despite the sharp criticism we have been the subject of.” Friends and soldiers Azaria serves with said that they did not believe the defense team acted aggressively enough in his defense. “The appeal will depend on what the other side has to say.”

However, the offer had to be a very good one, Mr. Katz told Maariv in a separate interview. “As we are looking at the situation, there seems to be little choice but to appeal,” he said.

Mr. Azaria was convicted last month on charges of manslaughter and conduct unbecoming an IDF soldier, after shooting at a terrorist in Chevron last Purim morning when he was neutralized and on the ground, after he had been shot when he tried to stab soldiers. At his trial, defense attorneys stressed Mr. Azaria’s sterling record as a soldier, and the fact that the possibility of a further terror attack – in which the terrorist who was on the ground might set off a bomb that he could have been carrying on his person – justified the shooting, or at least provided reasonable grounds for Mr. Azaria’s having acted the way he did.

Although the soldier was sentenced to 18 months in prison, the army can decide to override that sentence altogether, or to at least reduce it. According to media reports, there is a great deal of sentiment among army brass to do just that, and “if a good offer is made, there is a good chance we won’t appeal,” said Mr. Katz. “We will decide what to do when we are presented with all the information we need, and after consulting with the family. We will do everything we can to act in Elor’s interests.”

In its decision, the military court, among other things, sharply criticized former Defense Minister Moshe Yaalon, saying that he and other top IDF staff had no business giving their opinions on the incident publicly while the trial was going on. In response, Mr. Yaalon said that “as soon as the incident occurred it was clear to me, the prime minister and the IDF Chief of Staff that something out of the ordinary had occurred. I felt I had to speak out in order to counter the statements of people like MKs Avigdor Liberman and Oren Chazan, who were criticizing the court for its decision together with radical right-wingers like Bentzi Gopstein, Baruch Marzel and Moshe Feiglin. I said that the orders for opening fire needed to be set by the Chief of Staff, not by the street rabble rousers. I did that as part of my responsibility as defense minister.”

At the time, Mr. Liberman, then an MK, condemned the conviction of Mr. Azaria, saying that it was “damaging to the security of Israel,” and that it would discourage soldiers from acting to prevent terrorism. On Tuesday, however, Mr. Liberman said that he hoped that “both sides will now take steps to end this issue, including those who are opposed to Azaria’s conviction. The important thing is to respect the court’s decision. With that, the defense infrastructure must stand by this soldier and his family. We cannot forget that we are talking about a soldier and a terrorist who came to kill Jews.”