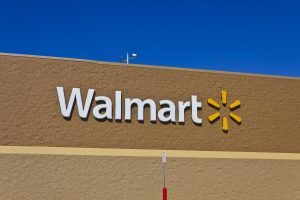 Wal-Mart drew more shoppers to its namesake stores in the United States and its e-commerce sales soared, signs that its efforts to lower prices and improve web services are helping it compete better against online leader Amazon.

The company saw the biggest gain in a key revenue measure in its U.S. business in four years, marking the 10th consecutive increase. The number of customers rose for the ninth straight quarter. And online sales rose 29 percent in the third straight quarter of gains after about two years of a slowing trend.

Still, the world’s largest retailer reported fourth-quarter earnings that fell 18 percent as its results have been squeezed by its investments in online upgrades and stores. The results did beat Wall Street expectations. And total sales were hurt by a stronger U.S. dollar, which is making its international business more challenging.

Wal-Mart Stores Inc. also said Tuesday it has seen sales weaken at the beginning of the first quarter in part because of a slowdown in tax refunds amid a new tax rule. And it warned that any tax on imported goods, as in a proposal Republicans in Congress have floated, would raise prices and would hurt shoppers.

Wal-Mart, like other traditional retailers, has been trying to improve its online operations to be a stronger challenger to online leader Amazon.com. The end-of-year shopping season was challenging for many retailers, underscoring the changes brick-and-mortar stores need to make. But Wal-Mart’s results show that its aggressive efforts are helping.

“We’re moving with speed to become more of a digital enterprise and better serve our customers,” CEO Doug McMillon said in a statement.

Wal-Mart has retooled its own online shopping programs and bought up some smaller companies with online strengths. It spent more than $3 billion for Jet.com in a deal aimed at helping it attract younger and more affluent customers. And it just announced that it had bought the outdoor and gear seller Moosejaw for $51 million as it expands its online product selections. Moving closer to the terms of Amazon’s powerhouse Prime program, Wal-Mart is now offering free two-day shipping on online orders of its most popular items with a minimum purchase order of $35. Amazon Prime still costs $99 a year, but comes with services like streaming music and video. Executives said Tuesday that shoppers are responding well to the program.

Last year, Wal-Mart said it planned to slow its new store openings and pour money into its online efforts, technology and store remodels.

Global e-commerce sales grew 29 percent in the quarter, up from 20.6 percent in the prior period. Wal-Mart said it’s working to accelerate the integration between Wal-Mart and Jet.com, and trying to take advantage of its scale in areas like shipping and sharing its product selection. Wal-Mart last year also raised its stake in JD.com, China’s No. 2 e-commerce site. But online sales still only account for a fraction of its total.

Besides melding its online and store businesses so shoppers can jump back and forth, Wal-Mart has launched changes designed to make its stores cleaner and its customer service friendlier and faster. The company has also invested $2.7 billion in higher wages and training for workers, a move that it says has helped to lower turnover and improve customer service.

Wal-Mart and other retailers face new challenges, as shoppers face uncertainty about health care and other issues under President Donald Trump. Wal-Mart and other retailers also oppose the Republican proposal aimed at encouraging manufacturing in the U.S. that would essentially tax imported goods — something the retail industry says would increase prices for shoppers on items like clothes and toys by as much as 20 percent. The National Retail Federation, the nation’s largest retail trade group, estimates the proposal would cost the average family $1,700 in the first year alone. Those kinds of increases would hit hardest on low-income shoppers, Wal-Mart’s main customers.

Analysts had expected earnings of $1.28 per share on revenue of $131.13 billion, according to FactSet. Wal-Mart says a key revenue metric rose 1.8 percent at its U.S. namesake business, up from 1.2 percent in the previous quarter. It was the biggest gain since the third quarter of 2012. Customer traffic rose 1.4 percent in its U.S. business.