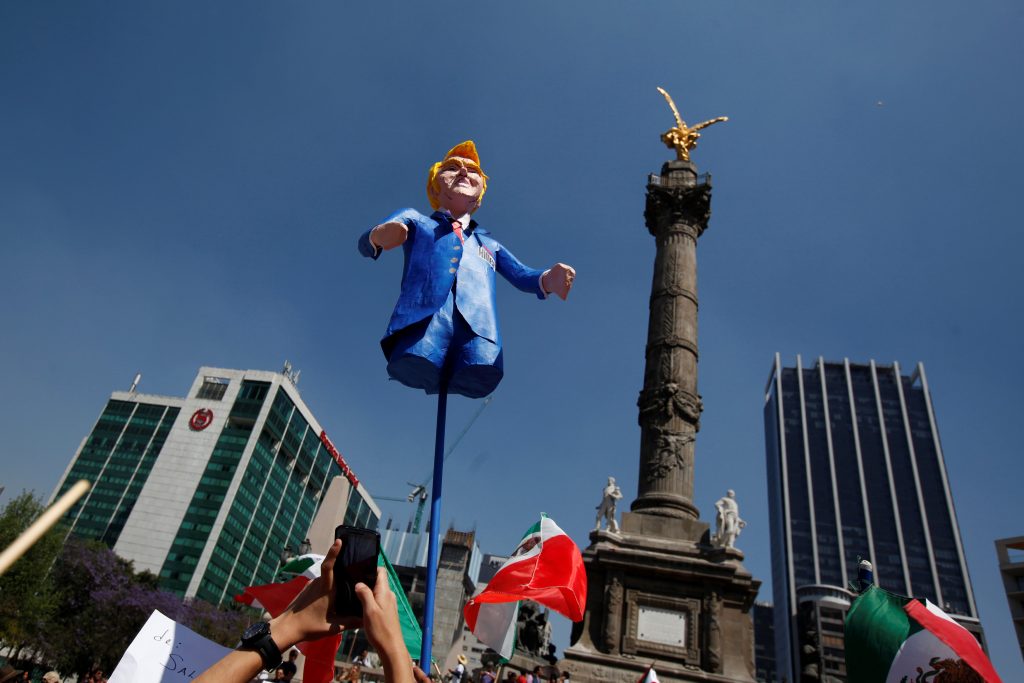 Thousands of demonstrators waving Mexican flags and signs denouncing President Donald Trump marched through central Mexico City Sunday, the largest mobilization in the capital to date against the policies of the Trump White House.

“We are not against the American people: This is about Trump, who is spreading hate and division,” said Maria Garcia, a former resident of Chicago who carried an unflattering, papier-mâché likeness of the U.S. president. “The United States and Mexico are natural friends and allies, but Trump is destroying this.”

Protesters hoisted signs declaring, “Respect, Mexico” and “We are all Mexico”, as they marched down Paseo de la Reforma, the capital’s main street.

The turnout and emotion were indicative of the widespread indignation that Trump’s various policies – widely viewed here as anti-Mexican – have sparked south of the border.

“Trump, pay for your own wall!” one sign said in English, a reference to the president’s plan to build a new barrier along the almost 2,000-mile frontier between the two nations.

The proposal has been a flashpoint of criticism here. The Mexican government has rebuffed Trump’s declarations that Mexico would pay for the wall.

Along with the wall, Trump’s plans to step up deportations, impose on products imported from Mexico and renegotiate trade deals have angered many in Mexico and raised fears of an economic collapse. The Mexican peso has been steadily declining in value against the U.S. dollar since Trump began rising in the U.S. election polls late last year.

The march was one of two major anti-Trump mobilizations planned for Sunday.

Some stayed away from the demonstrations, viewing them as too supportive of the administration of President Enrique Pena Nieto, who has low approval ratings as Mexicans are concerned about corruption, violence and rising prices. While some have expressed support for the president, others have argued that he should take a stronger posture against Trump.

“This is in no means an event to back the president,” said Manuel Cevallos, a teacher who said he lived for two decades in Southern California, and was attending the rally. “We need a real president who defends the rights of Mexicans, who stands up to Trump.”

Pena Nieto spoke repeatedly of “unity” in recent days. He and other Mexican leaders have vowed to help deported compatriots returning to Mexico and to bolster aid for Mexican immigrants in the United States. But there is little that Mexican officials can do to curb Trump’s plans to build a wall and accelerate deportations.

Still, many participants in Sunday’s demonstrations said it was important to show a unified front against what many Mexicans view as a hostile administration in Washington.

“Trump does not have the right to treat Mexicans like we are all delinquents, to humiliate us,” said protester Jose Acevez. “We Mexicans have dignity and we demand respect. We are a united nation. We know how to unite in difficult moments.”