Wall Street capped a subdued day of trading Tuesday with a tiny gain and another milestone.

After spending much of the day drifting between small gains and losses, U.S. stock indexes closed slightly higher, nudging the Nasdaq composite to another high, eclipsing the record it set last Friday.

For the most part, investors continued to focus on the latest batch of company earnings and outlooks. But traders also have an eye on lawmakers in Washington to gauge whether expectations of business-friendly policies, which helped fuel the market rally last fall, will be fulfilled.

“Certainly earnings have been supportive, but the other thing that’s been supportive is the hope that we’ll get some policy stimulus,” said Mike Baele, managing director at the Private Client Reserve at U.S. Bank. “Now we’re waiting to see if that hope is justified or not.”

Energy sector stocks were the best performers in 2016, riding a rebound in oil prices on the way to a gain of 23.7 percent. This year, though, the sector is off 5.1 percent, the second-biggest decliner behind phone companies.

“Concern over additional supply coming into the market has hit some of the energy stocks,” Baele said. 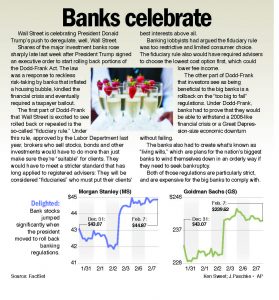 Disappointing quarterly results or outlooks weighed down several stocks, including Michael Kors. The luxury retailer, which gave weak guidance for its current quarter and cut its estimates for the year, was the biggest decliner in the S&P 500 index. The stock slumped $4.46, or 10.8 percent, to $36.82.

General Motors fell 4.7 percent after the automaker said its earnings declined in the fourth quarter as costs increased. The stock gave up $1.73 to $35.10.

Sabre tumbled 10.5 percent after the travel industry technology provider issued a forecast for 2017 that fell short of Wall Street’s estimates. The stock shed $2.60 to $22.21.

Traders bid up shares in companies that posted better-than-expected quarterly results, including health insurer Centene, which climbed $3.37, or 5.3 percent, to $67.

Emerson Electric gained 4.5 percent. The company, which makes process controls systems, valves and analytical instruments, also raised its estimates for the rest of the year. The stock rose $2.68 to $62.54.

More than half of the companies in the S&P 500 index have reported quarterly results so far, and more than 60 percent have posted earnings that beat financial analysts’ estimates, noted Erik Davidson, chief investment officer at Wells Fargo Private Bank.

“We haven’t seen a lot of earnings growth in the past several quarters, so the market is excited to see that,” Davidson said. 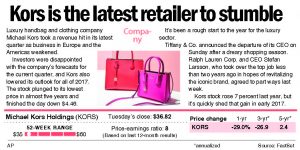