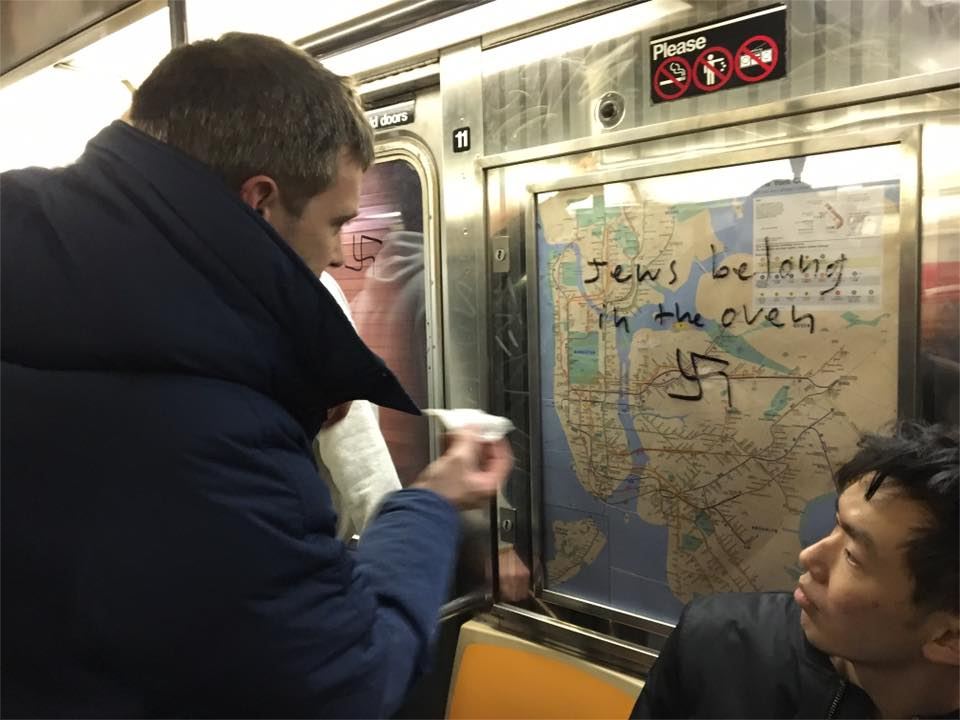 On a 1 train in Manhattan on Saturday night, passengers found swastikas and hateful messages scrawled “on every advertisement and every window,” Gregory Locke, a passenger, described on his social media page.

“The train was silent as everyone stared at each other, uncomfortable and unsure what to do.”

Then, one passenger said, “Hand sanitizer gets rid of Sharpie. We need alcohol.” Using hand sanitizer and tissues, the man removed one of the messages. Then the other passengers got to work.

“I’ve never seen so many people simultaneously reach into their bags and pockets looking for tissues and Purel,” wrote Locke. “Within about two minutes, all the Nazi symbolism was gone.”

A photo posted on Locke’s social media page shows a man with tissues removing a swastika with the message “Jews belong in the oven” scrawled on a subway map in one car.

“A passenger aboard a northbound B Train recently observed a swastika drawn in green marker in the center of a United States flag affixed to one of the passenger cars,” said Cuomo. “The swastika was then boxed out in a black marker and altered with the letters ‘L-O-V-E.’ ”

“This is what New Yorkers do – we turn hate into love,” said the Governor. “That is our message to the nation and to the world. And we won’t back down. Not now, not ever.”
Cuomo said that the incident is being investigated as a hate crime.