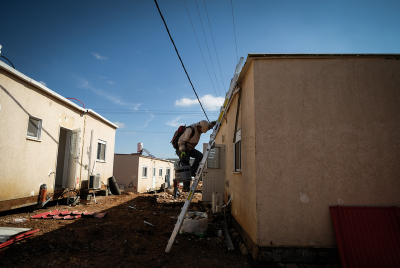 The demolition of nine homes in Ofra was postponed for a month Sunday, even as a coalition crisis over a law preventing future demolitions was brewing. In a ruling issued Sunday, the High Court gave residents of the homes in Ofra 30 days to find other accommodations. The residents had asked for a delay of at least three months, but the court turned this down, saying that a month was sufficient time for them to find alternative homes, after the court had ruled several times that they had to vacate the homes based on claims by Palestinians that they own the land on which they are built.

In its decision, the court said that it hoped that the residents “will leave their homes voluntarily, as they had committed to” when they asked for a postponement. “No one has the right to act violently in the face of the rule of law.” As there were no Palestinians set to move into the homes or take over the land in the immediate future – the petitioners live in Jordan – there was “no harm” in postponing the evictions by a month.

In a statement, Yesh Din, the far-left group that brought the lawsuit that led to the eviction decision, said that “these homes should never had been built in the first place, as they are located on private Palestinian land. We hope that next month the evictions will take place, and that we will not be witness to attempts to circumvent the court decision.”

The families who live in the homes said in a statement that they were very disappointed, as the court should realize that a month is not sufficient time to find alternative accommodations. “We demand that Prime Minister Binyamin Netanyahu’s government tomorrow pass the Settlement Arrangements Law in order to release families from the threat of eviction and demolition, as the far left, using the services of the High Court, demands, as it cooperates with our enemies.”

That law, if it is passed, would, its sponsors hope, prevent future demolitions. The law would replace the process now governing Arab claims of ownership of land on which Israeli homes are built. Currently, such claims are adjudicated by the High Court but the bill would instead institute a special arbitration process that would, among other things, advocate land swaps that would replace the land claimed by Palestinians with state land of equal or greater value that is not in dispute. The law is designed to prevent the demolition of homes at outposts and settlements that were built in good faith, but later were discovered to be built on private land.

Jewish Home, which is sponsoring the bill, plans to bring it to a vote on its second and third reading Monday, but on Sunday afternoon Prime Minister Netanyahu requested that the vote be postponed until he returned from his meeting with President Donald Trump later this month, or at least until he returns from the U.K. this week, where he is to meet with Prime Minister May – a proposal Minister Naftali Bennett rejected Sunday. Sources close to Prime Minister Netanyahu told Israel Radio that he had tried “very hard” to postpone the vote, but that Minister Bennett intended to bring the law for its vote by Monday night the latest. Later, Prime Minister Netanyahu’s office issued a statement saying that he had merely sought to inform Washington of the likelihood of the vote, and ensure that both Israel and the U.S. were “on the same page” regarding the law.

Speaking Friday, Jewish Home MK Betzalel Smotrich said that if the law does not pass, “then there will be no government. The only thing that allows us to remain here is the prospect that the Settlement Arrangements Law will pass,” he told Army Radio. “I can tell you in the plainest language possible, not just in my name but in the name of Naftali Bennett, that if the law is not voted on by Monday there will be no government.”