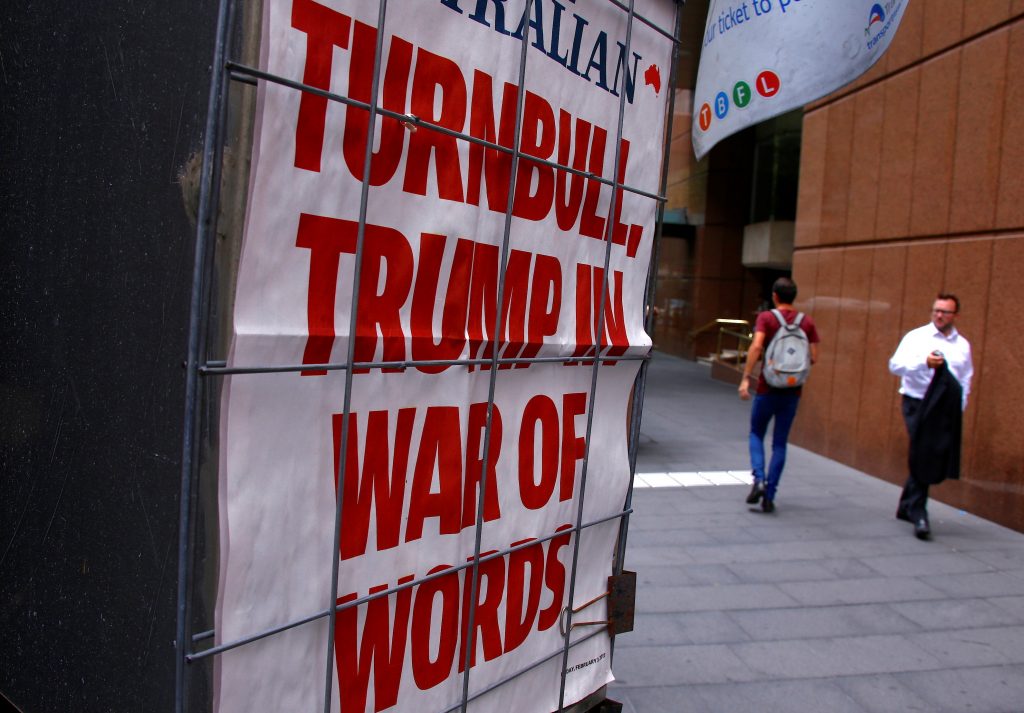 Australian Prime Minister Malcolm Turnbull might receive a short-term boost after his infamous phone call with President Donald Trump but is likely to be the long-term political loser, analysts and rights advocates said on Friday.

Languishing in opinion polls and vulnerable to attacks from within his own Conservative Party, Turnbull at least woke on Friday to domestic media praise for his perceived statesmanship for refusing to go into details about the call, during which Trump berated him over a refugee resettlement deal.

President Trump has since begrudgingly said he would stand by the plan, agreed on by Prime Minister Turnbull and former President Barack Obama in November, but has also described the deal as “dumb” and said the asylum seekers would be subjected to “extreme vetting.”

Under the deal, the United States will take in as many as 1,250 asylum seekers held in Australian processing centers on remote Pacific islands in Papua New Guinea and Nauru. In return, Australia will resettle refugees from El Salvador, Guatemala and Honduras.

The agreement is critical for Turnbull, whose center-right coalition government came to power on its tough immigration policy that prevents asylum seekers who attempt to reach the country by boat from ever settling in Australia.

Attempts in recent years to resettle some of the asylum seekers in Cambodia and Malaysia collapsed, leaving Turnbull to portray the deal with the United States as a solution for the asylum seekers that also sticks to those hard-line policies.

“He’s hung that credibility on saying it’s all going to come to an end in a happy way though this deal,” Australian National University sociologist Rick Kuhn told Reuters by phone. “If the refugee swap falls through then it’s an absolute disaster for him,” he said.

Even more bad news for Turnbull is the growing fear among lawyers and refugee advocates that Trump’s “extreme vetting” would effectively rule out most of the asylum seekers on Nauru and Manus island.

In an executive order signed a week ago, President Trump suspended the U.S. refugee program for 120 days and stopped visits by travelers from seven Muslim-majority countries – Iran, Iraq, Libya, Somalia, Sudan, Syria and Yemen – for 90 days.

Many of the asylum seekers applying for the U.S. deal are from countries on that list.

“Extreme vetting at the moment is a statement of intent and not one for optimism,” said Daniel Webb, director of advocacy at the Human Rights Law Center. “The deal may be viable for some but it is going to leave many people behind.”

Turnbull, whose poll numbers have plummeted since he toppled former leader Tony Abbott in a party-room coup and then led his coalition to an unconvincing election win last year, has few other options.

Deals with Cambodia and Malaysia were flops – only two refugees were resettled in Cambodia in an arrangement that cost Australia A$40 million ($31 million), and Australia’s High Court quashed a swap plan with Malaysia – while reports of talks with Canada have so far come to nothing.

Australia has also snubbed a long-standing offer from New Zealand to take 150 asylum seekers, fearing access to its neighbor would create a backdoor route to Australia.

All that, left Turnbull with little choice but to be conciliatory with Trump, who chastised him, even though Turnbull was one of the few world leaders who declined to comment on his immigration executive order.