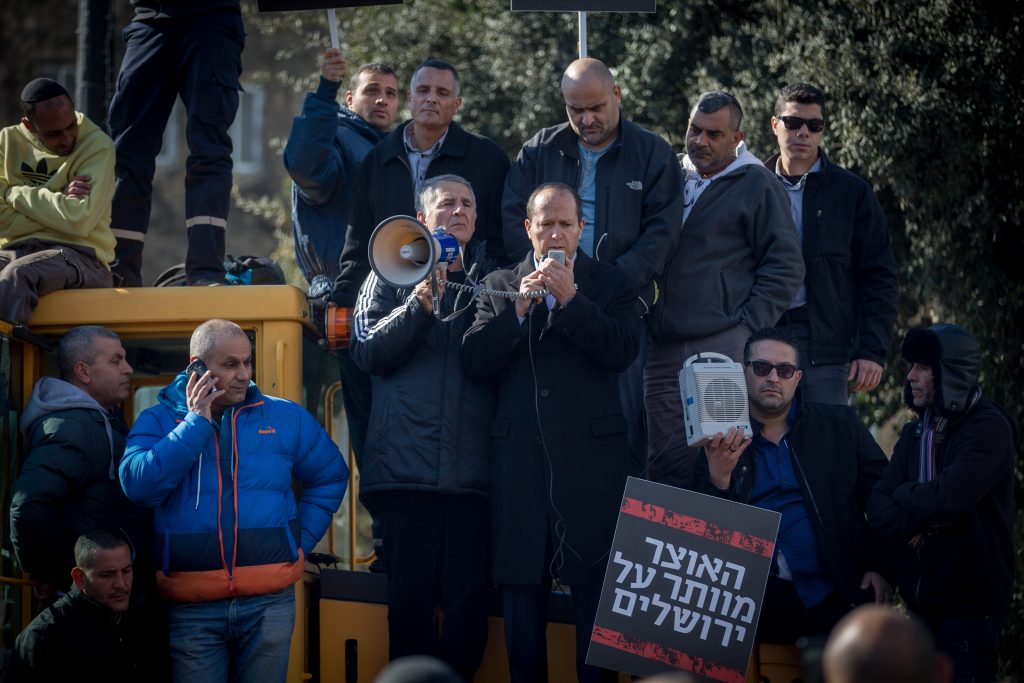 The Yerushalayim Municipality is on strike as of Sunday morning, with all municipal services, except education, on hold. The strike, unlike most, is being conducted with the full backing of city administrators including Mayor Nir Barkat.

Both workers and city officials are protesting what they called the “heavy-handed policies” of the Finance Ministry regarding the city, and especially the latter’s refusal to transfer money that the Knesset has allocated for the city’s special security and tourism expenses. The “Yerushalayim Grant” stood at NIS 500 million in 2016, and the Treasury offered to increase that figure by 5 percent, to NIS 525 million. Barkat, however, claims that the city needs NIS 1.2 billion — more than double what the Ministry offered — and claims that without it, the city cannot afford to continue operations.

According to reports, Barkat actually reached a compromise with Shai Babad, director general of the Finance Ministry, for NIS 800 million in funding. But the Ministry’s Budget Division has remained adamant on the NIS 525 million figure.

Barkat has blamed his long-standing feud with Finance Minister Moshe Kachlon for the bottleneck. According to political insiders, Kachlon is concerned over Barkat’s recent membership in Likud, where, Kachlon is said to believe, he is likely at some point to seek a leadership role. Kachlon sees Barkat as a rival, appealing to the same middle-class voters his Kulanu Party tries to attract. Beyond that, there is bad blood between Barkat and Kachlon over the resignation of the latter’s brother, Koby, as Yerushalayim deputy mayor in 2015. Moshe Kachlon is said to feel that Barkat did not stand up for Koby over a lawsuit and allegations of impropriety, according to political analysts.

In a statement, the Yerushalayim municipality said that demands made by the Ministry that the city “get its house in order” by firing workers and cutting budgets were “unreasonable,” and that the city has not operated at a deficit the entire time Barkat has been mayor. “We regret that the ministry is busy with media spinning at a time that the capital of Israel faces many challenges. These spins should not come at the expense of the residents of the city. The law requires that Yerushalayim be given a special grant, but the Treasury has prevented the money from being transferred for reasons that are not clear,” adding that Barkat “refuses under any circumstances to raise property taxes on Yerushalayim residents” to make up for budget shortfalls, as local arnona rates are already the highest in the country.

In a statement, the Finance Ministry said that the strike was “unnecessary and unhelpful,” and that it was willing to continue discussions with the city on all issues.