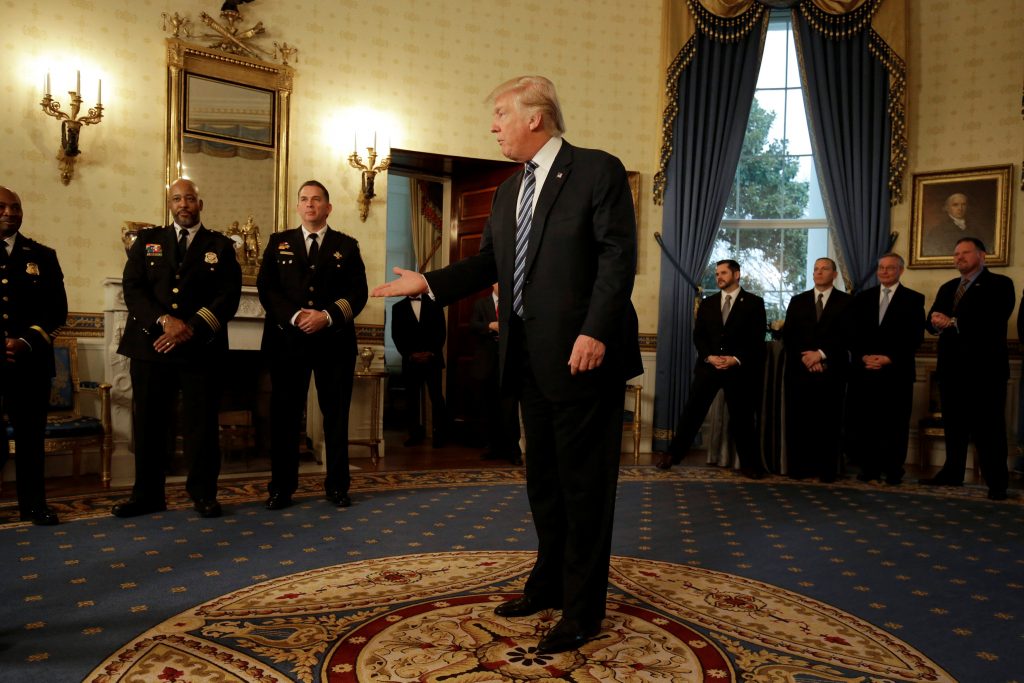 Trump turned what was intended to be a bridge-building visit to the CIA on Saturday into a media-bashing session centered on what he saw as low-ball reports about the crowd size on Inauguration Day. He berated a magazine journalist by name for an inaccurate report about Oval Office decor that had been quickly corrected. Then, he dispatched his press secretary, Sean Spicer, to the White House briefing room to reinforce the message in an angry tirade that included false — and easy to fact-check — statements.

The day left no doubt that Trump will govern, at least for now, as he campaigned: fixating on seemingly minor issues, letting no perceived slight slip by unchallenged, and, sometimes, creating his own set of facts.

Indeed, some of Trump’s remarks at CIA headquarters, with agency brass looking on, might well have come at one of his raucous campaign rallies. But this time, it was a memorial to fallen CIA agents that served as the backdrop for Trump’s declaration that journalists are “the most dishonest human beings on Earth.”

“I have a running war with the media,” Trump said, looking out at an audience of men and women who have played a direct role in the nation’s wars against terrorism.

Even with Trump’s track record, it was a remarkable scene. High-level CIA leaders stood silently as the Commander in Chief unleashed his off-topic attacks, though other agency employees who had volunteered to attend the event cheered the president on.

Trump has long been easily sidetracked by relatively insignificant issues, particularly those that threaten to chip away at his carefully cultivated image as the ultimate winner. He repeatedly inflated his crowd counts during the campaign, even though he was easily drawing bigger audiences than his rivals.

It seemed to be no coincidence that Trump’s fixation on the inaugural crowd came on a day when throngs of women flocked to Washington for a protest against his presidency. The march appeared to draw larger crowds than the one that gathered on the National Mall to watch Trump be sworn in as the 45th president of the United States.

The women’s march was widely covered on cable news, which Trump watches regularly. His motorcade routes Saturday also gave him an up-close look at the protesters, including some who lined the street and shouted at the president as he pulled back into the White House.

In theory, the pace and pressures of the presidency should leave Trump with less capacity to respond to every irritation. He now leads the world’s largest economy and most powerful military. His loyal supporters have pinned their hopes for change in Washington squarely on him, believing that his unconventional background and style will allow him to succeed where other politicians have failed.

But Trump appears to have concluded that his ability to do so hinges in part on tearing down the national media, an institution whose attention he simultaneously craves. While most presidents view the day’s headlines as a sideshow, Trump sees them as a daily barometer of his standing.

He’s benefited from his supporters’ deep distrust of journalists and the reality that most media pundits predicted his defeat in the campaign — never mind the fact that many Republicans, including some now serving in senior White House roles, did as well. His active presence on Twitter and other social media sites has given him the ability to command attention for his own version of events, which is often replicated by pro-Trump outlets.

Now Trump has all the trappings of the presidency to promote his version of events as well. When Spicer stepped into the White House briefing room Saturday evening, the pack of ever-ready journalists that work out of the West Wing was at the ready to chronicle his remarks.

Spicer, a Washington veteran who served in former President George W. Bush’s administration, was nearly shouting as he read off a script. Like his boss, he played loose with the facts, including his claim that white “floor coverings” to protect the grass on the National Mall were used for the first time and drew attention to any empty space. The same coverings were used four years ago.

Ari Fleischer, who stood at the same podium as Bush’s first press secretary, wrote on Twitter: “This is called a statement you are told to make by the President. And you know the President is watching.”