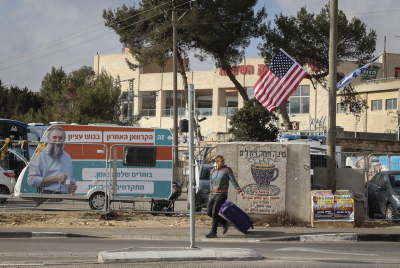 Residents of Gush Etzion are celebrating the inauguration of Donald Trump as president of the United States in their own way – by hanging giant American flags alongside Israeli flags on main highways throughout the area. The Gush Etzion Regional Council said in a statement that the celebration of Israel-American relations was long-delayed, “eight years in coming. All that time the prime minister claimed that the resident of the White House would not let us build. Now there are 2,700 homes that can be built, and we are hoping that things will be done as soon as possible to achieve this.”

Trump has spoken favorably of plans to build in Yehudah and Shomron, and the Council takes him at his word, it said. “We expect that after the inauguration he will support our construction plans,” the Council said. “He himself has said that construction in Judea and Samaria is not an obstacle to peace.”

With Barack Obama out of office and Donald Trump in, American agitation against construction should cease, the Council said. “We hung up the flags in order to show our appreciation and support for the new president. We are happy for his ascension to office. We are looking forward to meeting his ambassador or any other representative.”

In Washington for the inauguration are the mayors of Efrat and Maale Adumim, as well as Yossi Dagan, head of the Shomron Regional Council. The latter met Thursday with several top American officials, including Congressman Pete Sessions, a Texas Republican congressman who is said to be very close to the Trump administration. The two discussed the challenges for Shomron residents after eight years of the Obama administration Sessions slammed Obama’s Middle East policy, which culminated in the recent UN Security Council vote condemning Israeli building policy.

Calling that vote – and the rest of Obama’s anti-Israel policy – a “long, big mistake,” Sessions told Dagan and members of the Shomron delegation that “you and your children can go to sleep with the knowledge that the prime minister and the IDF will defend you, and the United States will back them up forever,” Dagan’s office quoted Sessions as saying.

Dagan said that Sessions, along with many members of the new administration, were friends of Jewish settlement in Yehudah and Shomron. “With that, we are not overly ecstatic,” said Dagan. “We hope to experience a better period for our communities, but it really is up to to the prime minister to take advantage of this opportunity and not let it slip away.”

Speaking to Army Radio Friday, Dagan said that the change in administrations was most welcome. “We felt like fourth-class citizens, like we were an opposition inside of an opposition. Today there is a new feeling. I am sensing a much greater openness to our positions in Washington. They like us as no other administration has liked us in the past. It certainly is a major change from the hostile attitude of the Obama administration.”