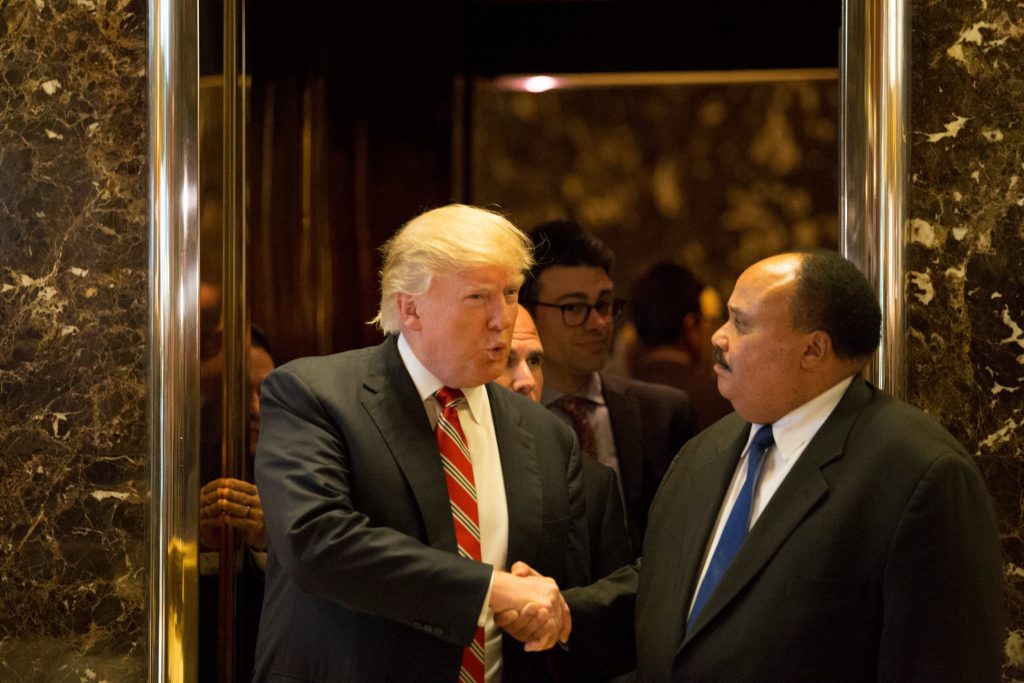 Donald Trump met Monday with Martin Luther King III, who said he used his time with the president-elect to discuss strategies to fix the U.S.’s “broken voting system.”

The oldest son of the civil rights leader trekked to Trump Tower amid renewed tensions between the incoming president and African Americans over Trump’s weekend twitter attack on another civil rights icon, Georgia Congressman John Lewis. King told reporters his conversation with Trump focused on boosting voting rights for those who feel their freedoms are under threat.

“We did have a very constructive meeting,” said King, who arrived at Trump Tower on the U.S. holiday honoring his father. Trump has said that he is going to represent all Americans and “I believe that is his intent,” King added.

King III has advocated for the government to issue free photo-identification cards that citizens could use to vote if they lack a driver’s license or another form of official ID. He said he would like Trump to direct the Social Security Administration to put a photo on the Social Security card of anyone who seeks such identification, or to direct the State Department to waive the $55 passport card fee for low-income Americans.

“Either approach is within the president’s authority and would impose minimal costs to secure the most fundamental right for all Americans — a right that most people consider priceless,” King wrote in a Washington Post commentary.

King wrote that minority vote totals had fallen from previous elections in battleground states that were key to Trump’s victory, including Pennsylvania, Wisconsin and Michigan. The declines may be attributable to legislative efforts intended to make it harder to vote, King wrote.

Trump spokesman Sean Spicer said on Twitter Monday morning that the meeting with King III was intended to discuss his late father’s legacy. Trump was initially planning to travel to Washington Monday to visit the Smithsonian Museum of African American History and Culture, but canceled because of scheduling issues, ABC News reported, citing transition sources.

A growing number of Democratic lawmakers have said they won’t attend Trump’s inauguration later this week following his criticism of Lewis, whose district includes much of Atlanta. The incoming president posted on Twitter Saturday that Lewis “should spend more time on fixing and helping his district, which is in horrible shape and falling apart (not to mention crime infested) rather than falsely complaining about the election results. All talk, talk, talk — no action or results. Sad!”

The tweets came after Lewis, 76, said he didn’t consider Trump a “legitimate president” because Russians helped him get elected. Lewis, who worked closely with Martin Luther King during the 1960s and suffered a cracked skull protesting for voting rights, made the comments in an interview with NBC News.

“In the heat of emotion, a lot of things get said on both sides,” King III said in response to reporters’ questions about the spat between Trump and Lewis.

Trump has repeatedly rejected suggestions that hacking by Russia or other actors helped him win. He did concede last week that the Russian government was behind the hacking of Democratic Party computers and the leaking of internal e-mails, as U.S. intelligence agencies have concluded.