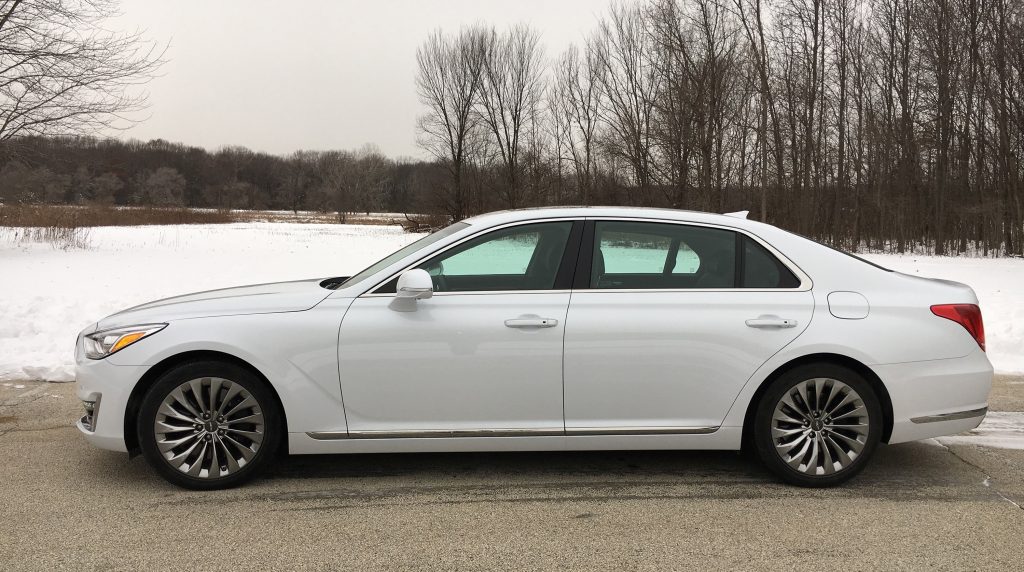 Thick, wet snow shrouded visibility and parallel ruts formed in the white stuff, serving as lanes. Traffic slowed to 20 mph, except for trucks and our Genesis G90 full-size sedan. We had full confidence at double the speed, and the heavy car stayed planted even while sloshing through rutted lane changes onto the off-ramp. We braked to a stop without much sliding, and turning onto snow-quiet unplowed side streets kept us going in the direction we intended.

To be clear, the flagship is made by Genesis, the new standalone luxury brand by Hyundai. It shows how far Hyundai has grown from the budget cars it launched on the U.S. market in the late 1980s; the Genesis brand — or at least the first of six models planned by 2020 — is more impressive than Ford’s Lincoln, Toyota’s Lexus, Honda’s Acura, and more distinctive than Nissan’s Infiniti and GM’s Cadillac.

The G90 does not match the German full-size sedans, and it doesn’t need to. It makes all the refinements of luxury cars accessible without the pretense, price or piecemeal options.

The G90 comes fully loaded with advanced cruise control, power sunshades, leather everything and a 365-horsepower twin-turbo V-6 for $70,600. The options listing on the Monroney label is a thing of simplistic beauty: The nearly three-dozen features are all “included.” It’s a stark contrast to the confusing trim levels and bizarro options packages of German makes.

With every automaker offering premium trims pretending to be luxury, and every luxury maker offering entry-level initiation models, the G90 does not feel like a compromise. It’s a clear evolution from its predecessor, the Hyundai Equus, which was too loaded for Hyundai but not quite distinct enough to be luxury.

That superlative handling in snow is in part thanks to the H-Trac AWD system, which shifts torque depending on the conditions, and the heavy weight of 4,784 pounds.

That’s a lot of car in these crossfit times. The advanced safety features help make it a highest-rated Top Safety Pick+ by the Insurance Institute for Highway Safety (but the bulk doesn’t hurt either). It’s a soft, quiet ride that doesn’t feel ungainly or motorboatish, thanks to the active suspension and responsive steering.

The weight is a drag on acceleration, however. Even in sport mode the G90 isn’t going to take your breath away, yet it hits 60 mph in 5.3 seconds, according to Car and Driver.

The eight-speed transmission is smooth, and customizable between four drive modes (including Eco), or can be overridden with the standard paddle shifters. Default mode is “Smart,” which reads the driver’s throttle inputs and responds accordingly, and the system is smart enough to be quicker than the paddle shifters. Overall the G90 averaged a bit better than 19 mpg in combined driving over a week.

Rear passengers loved the soft, luxurious ride, with ample legroom and its own climate controls that made them feel like royalty. I loved the thick armrest housing all the climate and infotainment buttons that separated my oft-warring prince and princess in the rear.

The upgraded V-8 engine model has heated, ventilated and reclining adjustable seats for the chauffeured class.

The driver’s seat is plenty luxurious, featuring what Genesis calls a class-leading 22-way adjustable seat position. In addition to the seats, Nappa leather covers the dash, heated steering wheel and door inserts. The horizontal display stretches the interior and complements the chrome accents around the wood trim. Like the German makes, there’s a controller dial in the center console for the excellent 12.3-inch color display screen, but audio and climate functions can be accessed through buttons for traditionalists, or on redundant steering controls for those who like to keep both hands on the wheel.

The wide screen and simple controls make it as good, if not better, than the dense complex systems by BMW and Mercedes, though we still prefer Audi. It makes for a really strong backup camera, as the screen splits to show a bird’s-eye view of what surrounds the car, in addition to what is behind.

The advanced technology in the G90 is what most effectively competes with the more performance-oriented Germans. The sharp, 9-inch head-up display is great for navigation when you don’t want to listen to the commands, and the 7-inch display in the center of the instrument cluster offers up virtually any information on demand. Adaptive cruise control, which maintains a set distance from the car in front of you regardless of changes in speed, is one of the easiest to use on the market, and coupled with lane-keeping technology proves that semi-autonomous driving can be embraced as long as there is an active, present driver. There is a 17-speaker sound system and a wireless phone charger in the console.

The G90 utilizes technology with a purpose, yet it doesn’t demand attention or overwhelm the user. The tech strikes a balance between being easily ignored yet easily called upon when needed.

The notion of modest luxury is where the G90 stands out. It’s luxurious without being ostentatious, capable without being obnoxious, refined without being too soft and loaded with helpful technology at a justifiable price.