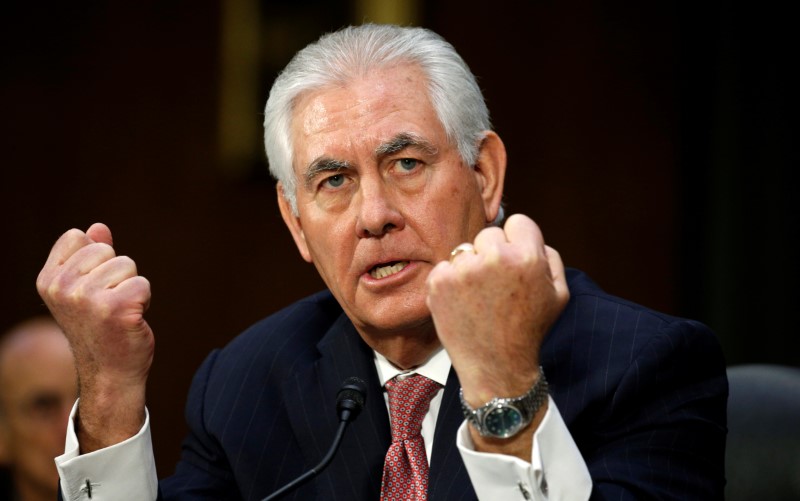 Donald Trump’s pick for secretary of state, former Exxon Mobil CEO Rex Tillerson, adopted a tough new line on Russia on Wednesday, calling it a “danger” to the United States and saying he would have recommended a muscular response to Moscow’s 2014 annexation of Ukraine’s Crimea region. Both assertions appeared to contradict the views of the president-elect, who has repeatedly spoken of improving U.S.-Russian ties.

Tillerson, a friend of the Kremlin and foe of sanctions in his corporate life, said last week’s intelligence report that Russia meddled in the 2016 presidential election was troubling and that it was a “fair assumption” Russian President Vladimir Putin would have personally ordered the intervention. He wouldn’t call Putin a “war criminal” for Russian military actions in Syria, but said he’d consider such a designation if he saw evidence.

Faced with pointed questions from Democratic and Republican senators about his Russia ties and relationship with Putin, who awarded him the Order of Friendship in 2013, Tillerson sought to allay fears that either he or Trump would go easy on Moscow. But in a surprising revelation, he conceded that he hadn’t yet discussed with Trump ideas for a Russia policy.

On Russia’s Crimea actions, he said: “That was a taking of territory that was not theirs.” He said he had been “caught by surprise” by the step, while criticizing the Obama administration’s response with sanctions on Russia, which ended up costing Exxon hundreds of millions of dollars.

Going beyond Obama’s approach, however, Tillerson said he would have responded to Russia’s actions against Ukraine by urging Kiev to send all available military units to its Russian border. He would have recommended U.S. and allied support to Ukraine, through defensive weapons and air surveillance, to send a message to Moscow.

“That is the type of response that Russia expects,” he said in a response to questions from Sen. Marco Rubio, who offered Tillerson perhaps the toughest Republican questioning. “If Russia acts with force,” Tillerson said, “they require a proportional show of force.”

Trump offered a sharply different account of Ukraine during the presidential campaign. In an August interview, he claimed Russia would not enter Ukraine, not seeming to know Russian troops were already there. He suggested Crimea didn’t count because the peninsula’s people preferred being part of Russia, restating Putin’s reason for taking the territory.

As chief of Exxon, Tillerson had opposed economic sanctions championed by both Democratic and Republican lawmakers. On Wednesday, he said sanctions “are a powerful tool and they are an important tool in terms of deterring additional action.” However, he said they could also send a “weak” message unless carefully crafted and applied on an international basis.

Addressing some of Congress’ most experienced architects of U.S. sanctions, Tillerson declared that neither he nor Exxon to his knowledge had lobbied against such forms of economic pressure previously. But the company did lobby to try to influence sanctions legislation on Russia two years ago, congressional records and data from the Center for Responsive Politics show, and Tillerson made numerous White House visits, to no avail.

Given a second chance on the subject, Tillerson sought to clarify his answer by saying that his opposition came after sanctions were imposed and that he expressed security-related concerns.

Unlike Trump, who has played down the intelligence community’s allegations of Russian malfeasance in the presidential campaign, Tillerson said he had no reason to doubt those conclusions. He stressed that he hadn’t yet received a security clearance and read the classified report.

After Rubio detailed the allegations of Russian hacking, propaganda and internet trolls to disrupt the electoral process, Tillerson said the public, unclassified report “indicates that all the actions you have described took place.” On whether Putin directed the initiative, Tillerson said, “I think that’s a fair assumption.”

Still, he said cooperation between Washington and Moscow remained desirable on many issues. It’s a line that hardly differs from that of the Obama administration.

“Russia today poses a danger, but it is not unpredictable in advancing its own interests,” Tillerson said, accusing the outgoing president of failing to demonstrate American resolve and sending mixed signals to both friends and adversaries.

Tillerson represents a break in a longstanding tradition of secretaries of state with extensive military, legislative, political or diplomatic experience. Yet his supporters point to Tillerson’s lengthy career as a senior executive in a mammoth multinational company as proof he has the management and negotiating skills to succeed in the State Department’s top post, particularly when facing tough foreign governments. Tillerson stepped down as Exxon CEO at the end of 2016.

“I think it’s brilliant what he’s doing and what he’s saying,” Trump said of Tillerson during a news conference in New York that occurred as Tillerson was testifying. “He ran incredibly Exxon Mobil. When there was a find, he would get it.”