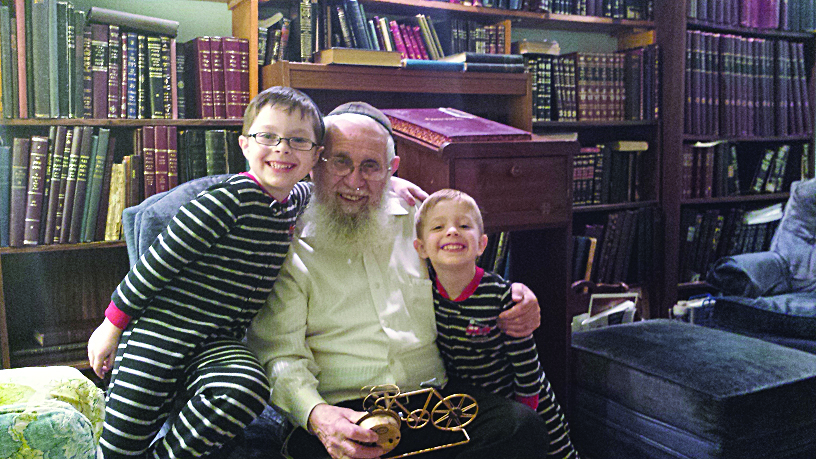 Like so many of his generation in Europe, he had an all too short childhood.

At the outbreak of the Second World War, when he was 14, he found himself, along with his family and others from the small Polish shtetl of Ruzhan, fleeing the Nazi invaders with only what they could carry on their backs. Soon enough, the refugees were apprehended and locked in a shul, with a neighboring home set ablaze and the flames growing closer. The din, he recalled, was deafening. People were shouting out the Shema with all their might, crying bitterly, saying Viduy. Then they were suddenly, miraculously saved before the flames reached the shul, by, they suspected, Eliyahu Hanavi, in the guise of a high-ranking German officer.

Then, in a miracle of will, the boy decided to leave his parents to journey to Bialystok, to join the Novardoker yeshivah, a dream he had been promised, before the war, he would be able to fulfill.

The yeshivah, though, wasn’t there anymore, and so the boy jumped onto a train to Vilna, where many Polish yeshivos had relocated. Lithuania was still independent.

It wasn’t long, though, before the Soviets took over, and he and his chaverim and rebbi were sent to Siberia, where they spent the war years, enduring long 40-degree-below-zero winters.

He once came close to death there. One of the other young men even trudged for kilometers through the snow on a mission, the trudger thought, to bury the boy, who was rumored to have succumbed.

At war’s end, the group made its way to Germany, were smuggled into Berlin’s American sector and set up a yeshivah in a town called Salzheim. Eventually, the boy, now a young man, was able to sail to America, where he married a respected Baltimore Rav’s daughter, who taught him English and helped him pursue his career, first as a rebbi in Baltimore’sYeshivas Chofetz Chaim and then as a shul Rav, a position he held for some 60 years. They had three children.

He was my father, hareni kapporas mishkavo. And his actual kevurah did not happen until more than 70 years had passed since that day his friend expected to inter him. It took place just before the start of Chanukah.

For all who knew and loved my father — and it is a very large group — his petirah was a wrenching personal loss. But it represented a tragedy for Klal Yisrael, too, and not just in the sense that an oved Hashem and marbitz Torah left this world.

It was a national tragedy for another reason, too, because, among all the many men and women whose lives my father touched and who came to the shivah house or called or emailed their nechamos — a group that included an astonishingly diverse spectrum of Yidden, from talmidei chachamim to the not-yet-frum — not a single one was from my father’s European chevrah.

That dearth, of course, was not unexpected. But it was an unhappy reminder, all the same, that the generation that witnessed the Jewish Europe that once was, and the horror and hashgachah of the Holocaust years, the generation that was our living link to that place and those days, is ebbing.

The only member, in fact, of my father’s Novardok chaburah in Siberia still alive is Reb Herschel Nudel, may he have a refuah shleimah, the man who endured that long, frigid walk to “bury” my father so many decades ago.

And yet, the scene at my father’s levayah that most vividly remains with me was when the announcement was made that grandsons and great-grandsons of the niftar should come forward to carry the aron to begin its journey to the beis olam, where my mother, grandmother, uncles and aunts, my Rosh Yeshivah, Harav Yaakov Yitzchak Ruderman, and my rebbi, Harav Yaakov Weinberg, zichronam livrachah, all lie, awaiting techiyas hameisim.

Those summoned came forth, but it took a while before the aron could be lifted. Not that it was heavy. My father wasn’t a physically large man. But it was a challenge for the many young men, all yirei Shamayim, who had heeded the call to find an empty spot to put their hands.

It was an aron, not a shulchan. But the words “Banecha kish’silei zeisim saviv lishulchanecha,” “Your sons, like olive shoots, all around your table” (Tehillim 128:3), even at that agonizing moment, rang like a melodic bell in my mind.