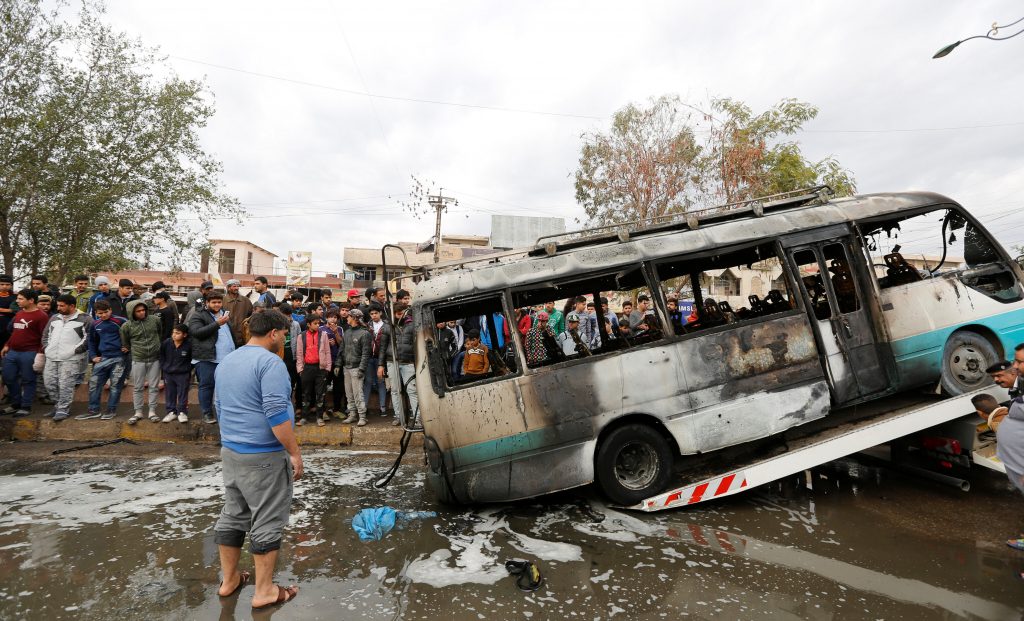 A suicide bomber driving a pickup loaded with explosives struck a bustling market in Baghdad on Monday, killing at least 36 people in an attack claimed by the Islamic State group hours after French President Francois Hollande arrived in the Iraqi capital.

The bomb went off in a fruit and vegetable market that was packed with day laborers, a police officer said, adding that another 52 people were wounded.

During a press conference with Hollande, Prime Minister Haider al-Abadi said the bomber pretended to be a man seeking to hire day laborers. Once the workers gathered around, he detonated the vehicle.

IS claimed the attack in a statement circulated on a militant website often used by the extremists. It was the third IS-claimed attack in as many days in and around Baghdad, underscoring the lingering threat posed by the group despite a string of setbacks elsewhere in the country over the past year, including in and around the northern city of Mosul.

The attack took place in Sadr City, a vast Shiite district in eastern Baghdad that has been repeatedly targeted by Sunni extremists since the 2003 U.S.-led invasion.

Shiite militiamen loyal to Muqtada al-Sadr, the firebrand cleric for whose family the neighborhood is named, were seen evacuating bodies in their trucks before ambulances arrived. Dead bodies were scattered across the bloody pavement alongside fruit, vegetables and laborers’ shovels and axes. A minibus filled with dead passengers was on fire.

Asaad Hashim, an owner of a mobile phone store nearby, described how the laborers pushed and shoved around the bomber’s vehicle, trying to get hired.

“Then a big boom came, sending them up into the air,” said the 28-year old, who suffered shrapnel wounds to his right hand. He blamed “the most ineffective security forces in the world” for failing to prevent the attack.

An angry crowd cursed the government, even after a representative of al-Sadr tried to calm them. Late last month, Iraqi authorities started removing some of the security checkpoints in Baghdad in a bid to ease traffic for the capital’s 6 million residents.

“We have no idea who will kill at any moment and who’s supposed to protect us,” said Ali Abbas, a 40-year old father of four who was hurled over his vegetable stand by the blast. “If the securities forces can’t protect us, then allow us to do the job,” he added.

Several smaller bombings elsewhere in the city on Monday killed another 20 civilians and wounded at least 70, according to medics and police officials. All officials spoke on condition of anonymity because they were not authorized to brief reporters.

The U.S. State Department condemned the wave of attacks “in the strongest possible terms.”

“These vicious acts of mass murder are a sobering reminder of the need to continue coalition operations against Daesh and to eliminate the threat this terrorist group poses,” it said, using an Arabic acronym for IS.

Separately, the U.S. military announced the death of a coalition service member in Iraq in a “non-combat-related incident” on Monday, without providing further details.

Hollande, meanwhile, met with al-Abadi and President Fuad Masum, and later traveled to the self-governing northern Kurdish region to meet with French troops and local officials. He pledged support for helping displaced Iraqis return to the city of Mosul, where Iraqi forces are waging a massive offensive against IS.

“We must also prepare a political solution for Mosul’s post-liberation so that its inhabitants can live together,” he said. Hollande also visited a military outpost on the outskirts of the city.

Since the Mosul operation started on Oct. 17, Iraqi forces have seized around a quarter of the city. Last week, the troops resumed fighting after a two-week lull due to stiff resistance by the militants and bad weather.

Mosul is Iraq’s second largest city and the last major urban area in the country controlled by IS. Iraqi and U.S. commanders hope to drive IS from the city in the next three months.