After a Jet Lands, a Sprint to Prepare for the Next Flight Begins

The minute the A321 jet reached the gate, teams of workers swarmed the plane with the precision of a marching band. For good reason.

In less than 80 minutes, the ground crew had to unload the passengers and their luggage, as well as cargo and mail, pump in 36,000 pounds of fuel, clean the plane, bring in a new flight crew and load 179 passengers for a return flight to Orlando.

In aviation terms, this is called “the turnaround,” and performing it quickly is crucial to the profitability of an airline. The adage “time is money” applies. The longer a plane sits at a gate, the fewer money-making routes it can fly.

“Everyone who touches that plane has to be synced,” said James Moses, American Airlines’ managing director at LAX.

But if airlines try to shrink the turnaround time too much, there is no room for errors and departure times are missed, drawing the ire of travelers.

A 2010 Federal Aviation Administration study found that delays cost the U.S. economy $32.9 billion a year, with about half of the cost borne by airline passengers because of missed connections and added lodging and food expenses.

Three years ago, Southwest Airlines tried to pack too many flights in the most popular takeoff times, but the tactic backfired and the carrier’s on-time performance dropped by 11 percentage points.

Southwest adjusted its turnaround time and has since improved its on-time performance to 85 percent, on par with its competitors.

A quick turnaround is so important — and employee performance so pivotal — that American Airlines has adopted an incentive program: If American Airlines ranks higher than its competitors in three key on-time categories, all 113,000 employees get $150 each.

Weather, air traffic control problems and late arriving flights account for about two-thirds of all flight delays, but factors within an airline’s control, such as maintenance problems, baggage loading delays and fueling snags, account for the rest, according to the U.S. Department of Transportation.

The pressure especially builds during the holidays when airlines add up to 40 percent more flights per day than during slower times of the year.

For American Airlines, the busiest carrier at LAX, that means a daily schedule of up to 225 flights during the crush of the holiday season.

The nerve center of the airline’s LAX operations is its control center on the fifth floor of Terminal 4. Resembling an air traffic control tower, with massive windows overlooking the gates used by American’s planes, it’s where the turnaround of Flight 998 could be tracked by the minute, as follows:

A number of smaller glitches, such as a torn seat or a broken toilet seat, can be set aside for repairs until the plane gets a longer overnight stop. A bigger problem that risks the safety of the plane, often called a “no-go,” such as damage to the fuselage, will ground a plane.

The plane pulls into Gate 45, 16 minutes ahead of schedule.

Outside the cabin, near the tail of the plane, Robert Williams, a 27-year veteran of American Airlines, directs his crew of two men and two women to unload about 5,000 pounds of luggage, cargo and mail.

The job has become more difficult in the last few years since airlines began to charge checked baggage fees. Travelers are now cramming more belongings into each bag to try to avoid the fees for extra bags. As a result, Williams said luggage that once weighed an average of 25 pounds now weighs 35 pounds.

“Nobody can tell you the best way to load luggage on your knees,” said Williams, over the din of jet engines.

A few yards away, the fueling agent heaves a fuel nozzle to the plane’s tank and starts pumping about 36,000 pounds of jet fuel. It’s a task that will take about 20 minutes.

Inside the cabin, the last passenger exits and a crew of four cabin cleaners begin to vacuum the carpet, pick up the trash from the floors, wipe down the tray tables and clean the three bathrooms.

Now, cleanup crew must make way for Mike O’Connell and his two workers from the catering company, Gate Gourmet, who enter the plane from the back of the cabin. The catering workers roll carts, filled with prepackaged meals, down the narrow aisles, trying to avoid the cabin cleaners.

“We are always trying to work around each other,” said Fay Mase, the operations manager for the cleaning crew.

Both crews have less than 20 minutes to complete their tasks, hoping to avoid any glitches that could delay the flight.

For the cleaning crew, an airsick passenger who vomited on a seat or carpeting — not an unusual occurrence — could slow the cleanup. But that’s not a problem on 998.

O’Connell’s biggest worry is that his crew will fail to load enough meals for the flight. A miscount doesn’t count as a no-go, but it means an angry passenger will go without food on the next flight.

These are the types of problems that are discussed when American Airlines managers meet in a conference room twice a day to go over operations. In those meetings, the managers of each team must explain their miscues and how to avoid them in the future.

“It gets rushed, and that’s why mistakes are made,” O’Connell said.

But both crews complete their individual tasks on time, without a glitch.

The passengers are ready to board the plane, now designated Flight 2381 to Orlando. So far, the turnaround is on schedule. But Alice Perez, the customer care manager at Gate 45, notices a few problems that could slow the boarding time.

Many of the passengers in line at the gate are making phone calls or listening to music on their cellphones. That could slow the queue when the passengers need to flash the boarding passes downloaded on those same smartphones, she worries.

Another potential delay is brewing in the front of the passenger line. A woman with two large, hard-shell bags begins to argue with a gate agent about the size of her luggage as the queue line backs up behind her. Her bags look like they won’t fit in the overhead compartment. The woman shoves the bags into the sizer, the metal cage that is used to determine the dimensions of a bag.

It’s not the sort of problem Perez wants to deal with during the busy holiday season — a time when there is an increase in unaccompanied minors. The minors, often visiting relatives across the country, can delay the boarding process because airline agents must walk children into the cabin and personally hand them off to a flight attendant.

International travelers typically cause the biggest headache because they try to carry as many belongings as possible in their carry-on bags. Business travelers are much easier, she said, because they usually carry little more than a briefcase holding a laptop computer.

With 23 minutes until takeoff, the final boarding call goes out. Down below, the cargo hold is closed and a tug, the vehicle that pulls the plane away from the gate, moves into place.

With 10 minutes until takeoff, the crew begins to close the cabin doors. Mario Castillo, the American Airlines agent at Gate 45, checks his computer screen and notices that two passengers have yet to check in.

If 20 or 25 passengers were unaccounted for, Castillo said he would call the control center to see if a connecting flight was delayed. But with only two passengers missing, the crew closes the doors and the plane pulls away from the gate.

Suddenly, a catering worker rolls up to the gate with two food carts. Perez and Castillo give each other an anxious look.

Will they have to stop the plane to haul in the carts, delaying the flight?

Don’t worry, the catering worker tells them, the food cart is for the next flight scheduled at that gate.

The jet pulls away from the gate on time.

The plane lifts off to the west. 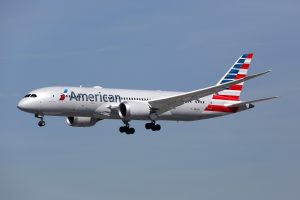